By LRU Writer | On: August 23, 2019
Danielle Macdonald moved from her home country Australia to Los Angeles in 2010. Her fiesty move as a teenager...With a rising career in Hollywood, Danielle’s dating life and boyfriend has gained traction among fans and media alike. However, the actress...Besides, her alleged romance with Rich, she was linked to another co-star. Well, Danielle’s alleged boyfriend is... 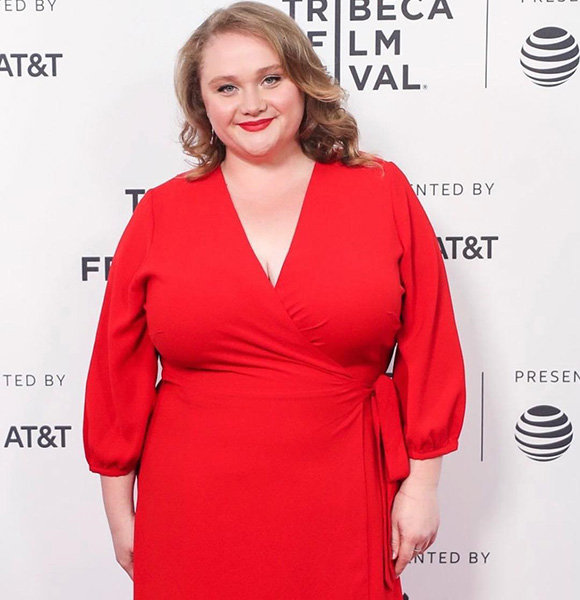 Danielle Macdonald moved from her home country, Australia to Los Angeles in 2010. Her fiesty move as a teenager worked in her favor as she managed to book roles in memorable projects in Hollywood. The actress was a part of the hit TV shows; Glee, Pretty Little Liars, and 2 Broke Girls.

In 2018, she widened her horizon with the role of Olympia and Willowdean in Netflix’s hit movies, Bird Box and Dumplin' respectively. Danielle is set to enthrall the audience with several new projects, namely Unbelievable, White Girl Problems, and Untitled Bo Burnham Project, which are all in the pre-production stage as of 2019.

With a rising career in Hollywood, Danielle’s dating life has gained traction among fans and media alike. However, the actress chooses to remain coy about her lover.

Amidst her efforts to hide her relationship details, the plus-size actress got linked to her Skin co-star Rich Barnes in 2016.

Interestingly, she wished her rumored boyfriend on his birthday via Instagram, the same year. And, he reciprocated the gesture with a declaration of love for her.

However, the alleged pair are yet to comment on the status of their relationship. The actor duo's lovelife remains a mystery as of 2019.

Besides, her alleged romance with Rich, she was linked to another co-star. Well, Danielle’s so-called boyfriend is Luke Benward, who played Bo in Netflix’s progressive 2018 movie, Dumplin'. Danielle Macdonald with alleged boyfriend Luke Benward in a still from the 2018 movie Dumplin' (Photo: justjaredjr.com)

Further, Luke gushed that he had a wonderful time working with the Aussie actress in 2019. Also, he praised Danielle as one of the most talented actresses.

However, like the actress’ link up with Rich, her alleged romance with Luke remains a mystery.

Danielle was born on 19 May 1991 in Sydney, Australia. The 28-year old boasts Taurus sunsign according to her date of birth. Her family consists of loving parents and an older sister named Tania Gabrielle.

Danielle’s folks - shipping company manager father and accountant mother - supported her passion from early on. They were on-board when she pursued her studies in the Australian Institute for Performing Arts in New South Wales.

The Aussie actress is making her presence felt in the Hollywood movies business. To date, she has 27 acting credits.

She started with a minor role in Glee’s Born This Way episode in 2011. After several supporting parts in movies and TV series including Toolies, Every Secret Thing, and Trust Me, she made a splash as the lead in 2018 film Dumplin'. She portrayed the role of a plus-size daughter of A-list actress, Jennifer Aniston.