By LRU Writer | On: August 18, 2019
Denny Hamlin is one of the most recognized... Had a difficult beginning to career... parents sacrificed a lot... has children with longtime girlfriend... sponsored by big companies... 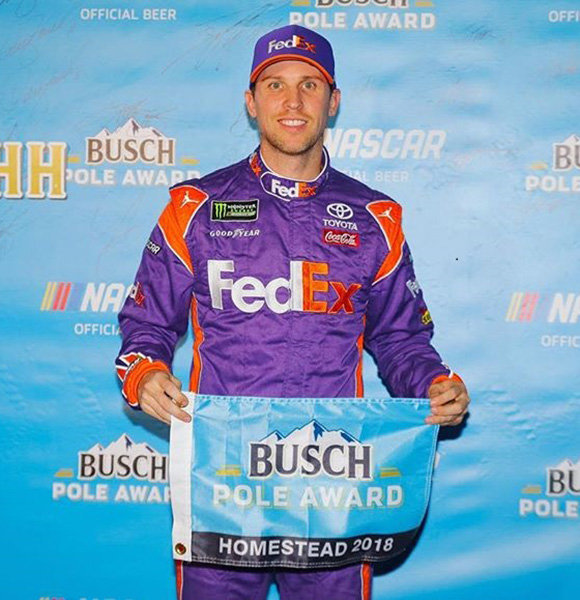 In the world of moto-sport, it is a tough job to make it into the track if the racer is not well-off.

Nonetheless, Denny Hamlin is one of those sports personalities who made it big despite all his earlier hardships.

In spite of his financial turmoil, the Florida native didn't just achieve mainstream success but is also considered one of the best drivers in NASCAR history.

Keep reading to find out his journey to the top amid all the struggles!

Reaching one’s goals is much easier with the love and support of the family.

Denny’s parents: father Dennis Hamlin and mother Mary Lou sacrificed a lot to pave the way for their child to follow his dreams. The racer's folks invested all they had for his future after they realized he had the talent to make it among the big names.

On a Twitter post from 2010, he had mentioned that he has two sisters and a brother. Apart from that, there is no real information about his siblings.

Read About This NASCAR Racer: NASCAR Racer Ryan Blaney Net Worth Revealed, Who Is Girlfriend - Dating?

Born on 18th November 1980 in Florida, Denny showed talents in go-karting at the young age of seven. Later moving on to race cars, he surprised everyone with excellent driving skills, despite the limited resources.

From such difficult beginnings, he would later go on to become the first rookie in NASCAR history to qualify for the Chase for the Sprint Cup and the 2006 Sprint Cup Rookie of The Year.

Denny Hamlin met his longtime girlfriend, Jordan Fish at her sideline performance for Charlotte Bobcats in January 2007. The two got acquainted but soon went their separate ways as Hamlin was tied to his highschool sweetheart, Kristin Buntain.

Some years later, after Hamlin had broken up with his girlfriend, he started dating Jordan, and the two have been inseparable ever since. Denny Hamlin with girlfriend Jordan Fish and two daughters after winning the Daytona 500 in 2019 (Photo: fabwags.com)

As of now, the couple has two beautiful daughters together - Taylor James Hamlin and Molly Gold Hamlin. Taylor arrived in 2013, while Molly was born in 2017.

The partners are yet to get married as of 2019. Fans of the lovely couple might have to wait for a while before seeing Denny & Jordan as husband and wife.

Being a world-famous race car driver comes with its perks. Sponsored by the likes of Coca Cola, Toyota, and FedEx, Jordan is one of the highest-paid racers in NASCAR.

With the money he makes, it does not come as a surprise that he resides in a luxurious house. His mansion is a 30000-foot smart home which includes a helipad, golf simulator and basketball court, among many other things.

Denny Hamlin’s net worth as of 2019 is estimated to be a whopping $45 million. At 38 years of age, he still has time to achieve more and subsequently, earn more.