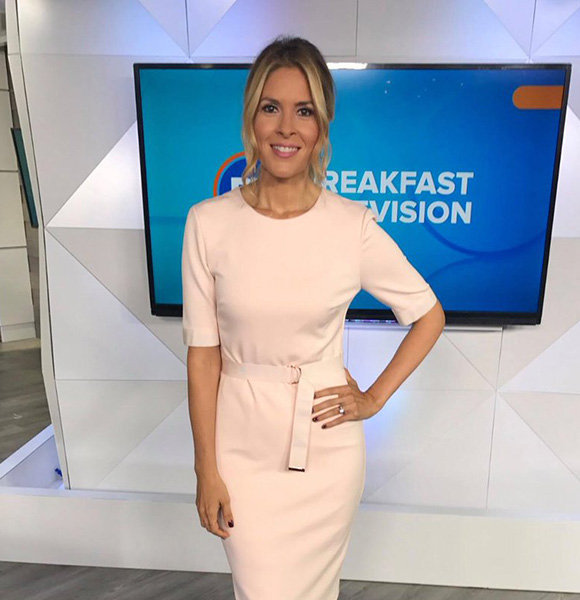 Before winning everyone’s heart as the presenter, she worked behind the camera for the longest time as associate producer of Global Television’s The Bynon Show and entertainment reporter, writer, and producer of Toronto 1’s morning show, Toronto Today.

Finally, in 2004, she became courageous enough to face the camera and joined her first-ever hosting gig at The A-List. Leaving her debut show after one year, she made a pit stop working at Star!’s Star! Daily before finally settling at Breakfast Television in 2006.

Who Is Dina’s Husband?

Dina is married to Alex Mirkovich - CEO and co-founder of Pathwayport.com. The lovebirds of Italian ethnicity have the cutest love story.

The pretty host had organized a stagette - a Canadian Bachelorette party - for, her co-worker at a bar. While Dina was playing a game, she interacted with a stranger, Alex.

Little did she know, he would be her soul mate and husband in the future. Well, feeling the instant attraction she gave Alex her number. Things were falling into place as without wasting time, he also called her the next day, and the pair went on a date.

It would be an understatement not to say that sparks flew instantly as the couple kissed on the first date and got engaged six months later.

Dina’s husband flew to New York to buy her a ring and proposed in a romantic setting at Niagara-on-the-Lake. No prize for guessing! She said yes, and the lovely couple got married in 2005. The pair had a beautiful wedding ceremony in Mississauga at St. Sava Serbian Orthodox Church. Father Michael, who officiated their wedding, unfortunately, passed away in December 2020 and Dina took it to her Instagram to bid the last farewell.

No one was happy at Dina’s happiness than her parents as she had always been a late bloomer. She had given up the desire of meeting the one and falling in love. She was 29 years of age when she first met Alex.

Well, age - though not in a relationship - became an issue for Dina when she tried to get pregnant. Unfortunately for the lovely couple, they tired too late, and there were a lot of complications for the TV host to bore children. Thus, they settled on enjoying their life to the fullest with their extended family of nephews and nieces.

The host was born on 22nd May 1974 in Woodbridge, Ontario. She grew up along with two sisters by her side.

After leading a fulfilling childhood, she went on to complete her education at Humber College, where she earned a degree in Journalism. Dina’s degree paid off as she went on to make a name for herself in the media field and became able to earn an annual salary of around $63,974, which adds to her net worth.

Besides her prominent work, she was also a guest judge on Canada’s Next Top Model and host of the prestigious Women In Film and Television’s Crystal Awards Gala.

Taking about her measurements, Dina stands at a height of 5 feet 10 inches (1.78 m) and boasts a healthy weight.