By LRU Writer | On: May 06, 2019
Journalist Elaine Welteroth made history when Teen Vogue named her its newest Editor-In-Chief in 2017...Delve into the revered journalist's biography to learn more... 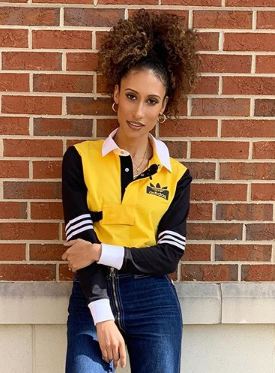 Journalist Elaine Welteroth made history when Teen Vogue named her its newest Editor-In-Chief in 2017. The decision made her the only second African-American as well as the youngest person ever to enjoy the stated title. She was 29 at the time.

At age 24, she had become the first African-American to hold the office of Beauty & Health Director at a Condé Nast publication - Teen Vogue's parent company.

Elaine was born in 1987 in Santa Clara, California, but grew up in Fermont, California with her brother Eric. A Sagittarius by birth sign, she celebrates her birthday on 10th December every year.

Her biological parents - Caucasian father John and African-American mother Debra - were a multi-racial couple. Because of her diverse family background, the award-winning journo, now age 32, identifies as belonging to mixed ethnicity.

A bright student since her childhood, Elaine excelled at both sports and academics at the Newark Memorial High School.

While still conquering her school education, she was a star track and field athlete. She benefited hugely from her height of 5 feet & 10 feet (1.77 m).

For college education though, the New York-based journalist attended California State University-Sacramento in 2004 to study Mass Communication/Media Studies. She also holds a minor in Journalism from the same.

Inside Her Salary & Net Worth

And within eight months of employment at Condé Nast, she got promoted from Glamour Magazine's Beauty Writer & Editor to Senior Beauty Editor.

Working as Teen Vogue's Editor-In-Chief for little under two years between March 2017 to January 2019, Elaine garnered immense reverence. But, she eventually moved on from her role at the publication - leaving behind a six-figure salary - to pursue a different creative excursion.

Now a CIAA talent, the California State University-Sacramento Alum is plotting to increase her seven-figure net worth by penning scripted as well as non-scripted shows on TV. She is one of the foremost writers of the Netflix sitcom Grown-ish.

Elaine is a catch - nobody knew this better than her then-boyfriend Jonathan Singletary when he popped the big question in December 2016 during a surprise family gathering. The former Teen Vogue's Editor and her New York-based musician fiance first met as teenagers at a church. The soon to be married duo, however, wouldn't begin dating much later.

Elaine's relationship with her husband prospect Jonathan recieved the green light only after she became single and no longer interested in dating.