By LRU Writer | On: May 20, 2019
Elika Sadeghi was born in Palo Alto, California...on 20th of January 1985...Her parents are from Iran...She worked as a sports broadcaster for CBS Sports, FOX Sports, ESPN...love life is a mystery 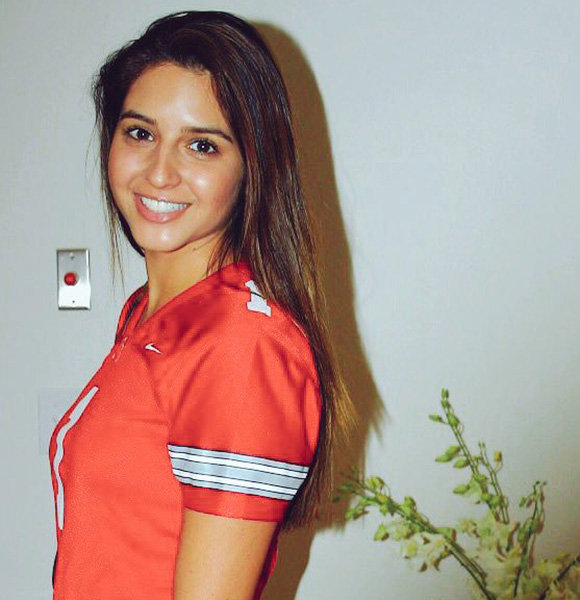 Elika Sadeghi made national headlines when she took Barstool Sports public in 2017 for their dodgy contracts. Refusing to sign an agreement that generalized offensive remarks at the workplace like it was nothing, Elika stood firm for all the women.

Know all about the sports broadcaster's personal and professional life, including the details of her age, nationality, birthday, married status, and more!

Elika Sadeghi was born in 1985 in Palo Alto, California and is an American by nationality. She celebrates her birthday on the 20th day of January every year.

Her parents had both migrated from Tehran, Iran. Despite coming from the same town in their home country, Elika's parents met only while at Ohio State University. For siblings, Elika has a younger brother. Elika Sadeghi with her brother during a wedding in November 2016 (Photo: Elika Sadeghi‘s Twitter)

She attended college at the California State University in Long Beach in 2002. She graduated with a Bachelor degree in Business Administration and a double major in Management and Marketing in 2007.

As for her measurements, the gorgeous brunette stands at a height above five feet. She has maintained a slim figure and is very conscious about her weight.

Is Elika Married? Husband In Sight?

Many people don't put their relationship on display for everyone to see. Some like to keep everyone else in the mystery since its none of their business anyway.

Elika is one of those individuals; she has managed to keep her personal life away from the bewitching eyes of the paparazzi. Such a beautiful woman must have been approached by a lot of Prince Charming(s), but she might be waiting for the one that will last a lifetime.

Or, she could be already married and keeping her husband hidden for unknown reasons.

Whatever the case is, fans will have to wait patiently for the day she breaks their hearts when she will come out to the public with a boyfriend.

Contrary to her personal life, her professional life contains a long list of jobs.

Elika started early at age 18 working as an SAT Prep Instructor for Kaplan Test Prep and Admissions in August 2003. She has since then dipped her feet in various endeavors gathering experiences and connections throughout the years.

Out of the multiple avenues she took up, Elika's rise to fame came as a sports broadcaster. She has worked with various multinational networks like ESPN, FOX Sports, NextVR, and CBS Sports.

She left the opportunity to work at Barstool Sports over a contract disagreement. The contract Erica was offered, if signed, meant that she was okay with offensive speeches on race, sex and so on. Her rejection of the offer made national headlines leading to ESPN dropping Barstool Van Talk after only ten days of broadcasting.

She now works as an Associate Director for a digital marketing agency named Wunderman Los Angeles.