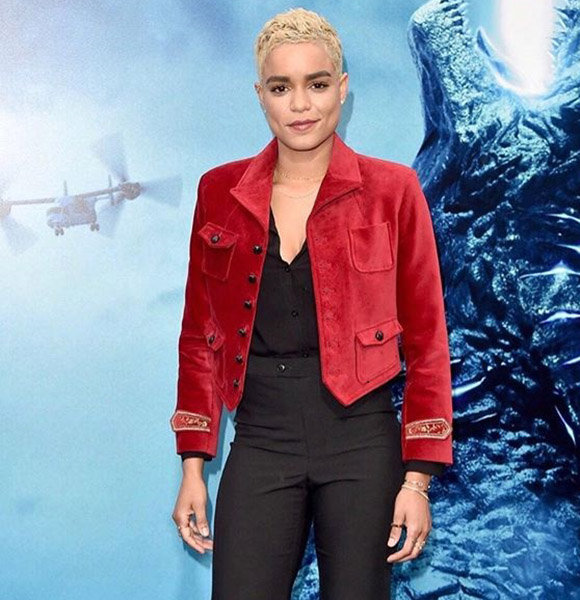 Elizabeth Ludlow started her career in 2013 via a minor role in The Vampire Diaries. She boosted her profile by working in TV series, namely Resurrection, Mr. Right, Satisfaction, Bound, and Powers.

However, it was her portrayal of Arat in The Walking Dead, which shot her to worldwide fame. Elizabeth further increased her popularity by working in movies; Guardians of the Galaxy Vol. 2 and Max Steel.

The American actress has been capturing the hearts of fans as Cas Isakovic in Netflix’s Another Life, which dropped on 25th July 2019.

The actress’ rise to Hollywood popularity has also brought attention to her personal life. However, Elizabeth remains tight-lipped about her dating status.

There is no trace of a potential boyfriend or girlfriend in her dating history. But, there are rumors rife about her lesbian sexuality. The notoriously private actress is yet to comment on such conjectures openly.

However, she does support the LGBTQI community on social media platforms. Her Instagram bio was dedicated to the significant LGBTQI slogan "Love Is Love” as of July 2019.

One can only assume things about her personal lives unless she comes out in the open about her relationship with a partner. For now, Elizabeth can be considered married to her acting career.

The American actress - height 5 feet 9 inches (1.75 m) - has worked with major studios like Marvel and AMC. Her role in the former was of Easik Mother in Guardians of the Galaxy Vol. 2. Also, she portrayed the character Agent Kat Ryan in the 2016 film, Max Steel.

With parts in high profile movies, Elizabeth commands a salary of over $49,986 per year, which adds to her blossoming net worth. In 2019, Elizabeth became an inspiration to many portraying a strong female character in the sci-fi series, Another Life. She opened up about her role while talking to MEA WorldWide ahead the premiere of her Netflix gig. She spoke at length about how there were no legendary sci-fi females, while she was growing up.

And, her role in the Netflix show was her effort towards changing the scenario of the sci-fi world in terms of women’s participation.

Born on 5 June 1989, Elizabeth boasts a mixed ethnicity. The Pittsburgh native is 30 years old, according to her date of birth. She is of African descent from her mother’s side.

Further, she also has English-Dutch-German-Scottish ethnicity, courtesy of her extended family. Elizabeth’s family life is no different than her romances; in a sense, details about her brood is mostly hidden.

Although the Max Steel actress is active on social media, she keeps the contents strictly dedicated to her professional life. No wonder, it is hard to get hold of information about her family.