By LRU Writer | On: December 05, 2019
British actress Felicity Jones is best known for her role in...earned the best actress nominations for the Golden Globes, BAFTA, SAG, and The Academy...is expecting her first child with...luminous and radiant with full pregnancy glow...tied the knot to British film director...was born...stands at a height of...got into acting at a young age...appeared in movies like...enjoys an estimated net worth of... 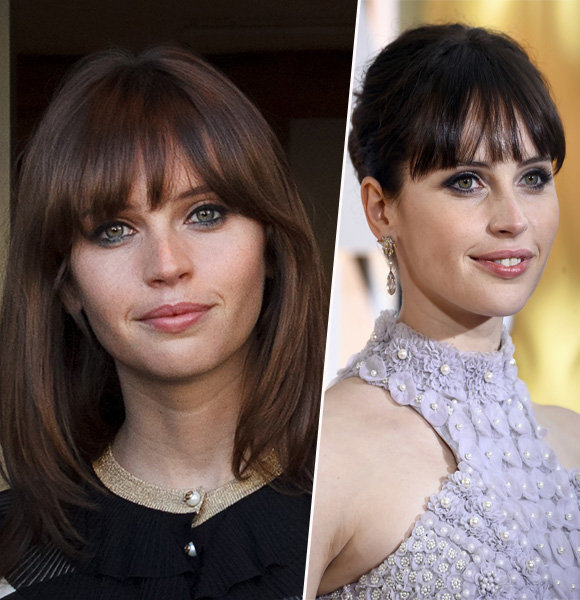 British actress Felicity Jones is among the A-list actresses in Hollywood. She is best known for her role in Stephen Hawking's biographical movie, The Theory Of Everything (2014). For her role in the movie, she even earned the best actress nominations at the Golden Globes, BAFTA, SAG, and The Academy Awards.

Most recently, the actress is back with her new movie, The Aeronauts (opposite Eddie Redmayne), in 2019. But, that's not the reason she is creating headlines.

Read on to find out more.

The Inferno actress turned heads on 4th December as she flaunted her baby bump at the New York premiere of her new movie, The Aeronauts. Felicity Jones during the premiere of her new movie, The Aeronauts, in New York on 4th December 2019 (Photo: people.com)

For the big event, Felicity dazzled in a black velvet gown with bow details and short puffed sleeves. As for her look, she opted for minimal makeup with her hair tied on the back.

As she was wearing a black dress, her baby bump was not popping too much but it sure was apparent. Further, the actress was luminous and radiant with full pregnancy glow on her.

Well, Felicity has not yet commented on her pregnancy but she must be looking forward to venturing into the new journey of motherhood.

Felicity Jones tied the knot to British film director Charles Guard on 30th June 2018. The couple dated for three years before walking down the aisle. As for their wedding, the couple opted for a very private and elegant wedding at Sudeley Castle in Gloucestershire, England. Further, stars like Tom Hanks and Eddie Redmayne were among the guests at their private wedding.

Felicity Jones is a gorgeous actress with a height of 5 feet 3 inches (1.6 m).

She was born as Felicity Rose Hadley Jones on 17th October 1983 in Bournville, England.

She got into acting at a young age after being encouraged by her uncle, actor Michael Hadley. She started acting at age 11, performing in various dramas at theatres. Her first big roles were in the TV shows: The Worst Witch (1998) and Weirdsister College (2001).

With such an impressive list of credits on her name, Felicity enjoys an estimated net worth of $6 million.