By LRU Writer | On: May 01, 2019
Starring alongside John Cena, as Kayla in Blockers, Geraldine Viswanathan has been noticed by the entertainment industry...Geraldine is working hard trying to climb the ranks and be among the elite actors and actresses in Hollywood... Geraldine stepped into the Television scene with, Lost Angels as Sarah in 2015 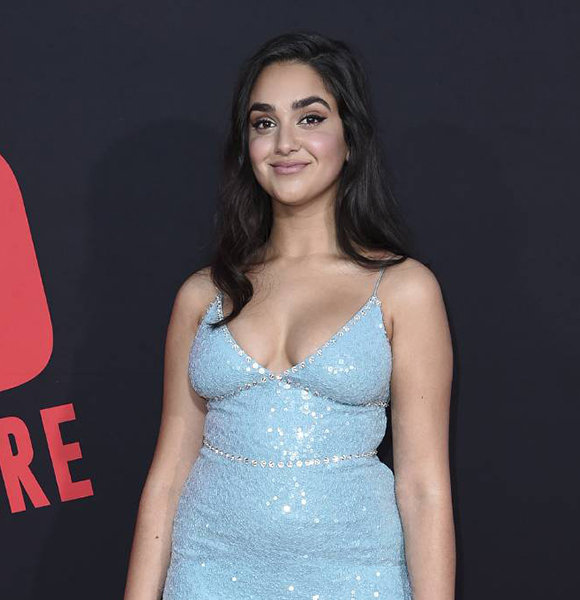 Starring alongside John Cena as Kayla in Blockers, Australian actress Geraldine Viswanathan garnered the attention of the entertainment industry. Now, that she is in the biz, Geraldine is working hard to climb the ranks and be among the elite actors and actresses of Hollywood.

Here is all that you must know about the uprising star!

Born on 20 June 1995, to Suresh Viswanathan and Anja Raith, Geraldine Viswanathan hails from the land of Down Under (aka Australia). She belongs to mixed ethnicity as her father is from Tamil, India whereas her mother is from Switzerland.

An Australian by nationality, Geraldine is an elder sister to Indira Viswanathan. Geraldine with her parents and sister (Photo: Geraldine Viswanatha's Instagram)

Taking about her measurements, Geraldine has an average height of 5 feet 6 inches (1.68m) and a weight of 56 kg. She has an hourglass curvy body figure measuring 32-25-34 inches.

Does She Have A Boyfriend?

Being a beautiful woman of age, fans are bound to question whether Geraldine is single or dating someone. But, the actress leads a private life and keeps things under the wraps.

However, Geraldine wrote about her boyfriend in an Instagram photo of 3 August 2016. On the post, she mentioned that she would miss her boyfriend as he would be in France for six months.

Likewise, she disclosed that her boyfriend was white via a 2018 tweet.

While fans are keen to know, who the mystery man lucky enough to be dating the gorgeous actress is, Geraldine has successfully kept her relationship under the wraps.

Geraldine's Career Plus Net Worth

Although Geraldine Viswanathan is not seen as often as she would like to in the ambitious movie industry, she does get a fair amount of work as someone who is just starting.

Geraldine stepped into the Television scene with, Lost Angels as Sarah in 2015. Since then, she has played a part in many other TV shows and movies. Most notable ones being, Blockers in 2018. She starred alongside John Cena as Kayla Mannes. The role helped her to be noticed by other people in the industry.

Another Talent From Down Under:- Katherine Langford Boyfriend, Lesbian, Age

Being a 23-year-old, Geraldine is just a young sprout in the film industry and has her whole life ahead of her. Considering that Geraldine has just started, she hasnt had time to build up huge assets. However, with constant work, her net worth will surely soar high.