By LRU Writer | On: September 05, 2018
Gino D'Acampo's is married to his beautiful wife...they met back in...when Gino worked at...resturant. His wife was the first woman he laid with and have been together since then. They got married back in...and are blessed with...children. Currently, he shares a blissful married life with his wife... 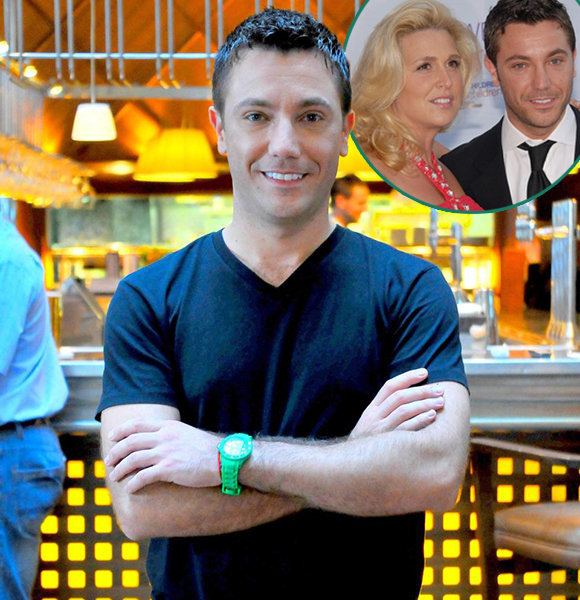 Italian celebrity chef Gino D'Acampo, who rose to fame as a regular chef on the ITV show This Morning, just knows how to keep his wife happy. While his quick wit and accent are just as attractive, his personal life is no less.

Indeed, he has been married and shares lifelong romance with his wife. The couple has also been blessed with children and now shares a blissful family life with them.

Here is a look at how this media personality's life is behind the curtains.

Gino D'Acampo, who is best known for his food-focused television shows, has been married for almost two decades. She shares the marital bond with his wife, Jessica Stellina Morrison.

What's interesting about Gino's love life is that Jessica is the first woman he laid with who eventually turned out to be his wife. Indeed, Gino first met Jessica when he was just completing his teenage at the age of 19.

Back then, Gino, who stands at the height of 5ft 8 (172.7 cm), worked in Sylvester Stallone's Mambo King restaurant which was located in Marbella. While working there in 1995, he met his love of life, and she was a few years older than him.

It turns out she used to abuse him, but in turn, Gino loved it. She was also the first woman he had a sexual relationship with far from the traditional Italian woman.

They had an instant connection and began dating right after. But after about a year of being together, they parted their ways. According to Gino, the break-up was important for him as otherwise, he would have always wondered what it would have been like to be with another woman.

Well, even if his wife is the first woman he laid with she sure is not the only one. Indeed, after being apart for a while, Gino did realize the quality of his first catch.

However, the couple later rekindled their romance and years later they were set to exchange the wedding vows. The pair got married back in 2002 and has been a married man since then. Well, Gino now has been married for 16 years to his wife Jessica and now shares a family of five with her.

In today's world, keeping the relationship alive is a challenge, but for Gino, it's an easy task. He has remained married despite catching the high fame the world of entertainment has brought.

Well, turns out he is something of a hopeless romantic with a definition of his own. His romance is nothing like of Rose petals on beds or cooking dinner for his wife but its something like cleaning her car or charging her toothbrush every time the battery is low.

Previously, Gino, who has a net worth of $10 million, opened up with OK! Online where he admitted of things he would do for his wife. He revealed that he fills fuel on his wife's car and keeps a bottle of cold water in case he got thirsty at night. He said,

"I clean her car every week. I charge her toothbrush every time the battery is low, and I always bring her a bottle of cold water just in case she's thirsty at night."

Adding to it, he is also the kind of person who gives his wife a goodnight kiss on her forehead before they go to bed. He added saying,

"I will always give her a kiss on the forehead and say good night before she goes to bed. I always make sure that she is happy, and that's how I believe a person can be romantic."

Well, he sure is romantic but in his own way which he believes to be far better than flowers or champagne or anything relatable.

Adding to it, he has also been able to keep his romance with his wife last this long. He revealed his secret to his long-lasting relationship saying that he and Jessica hardly spend any time together which is one of the reasons for them to last almost 20 years. He expressed saying,

"Jessica and I don’t really spend any time together. I think that’s one of the reasons we’ve lasted for 20 years. It’s a good thing, I don’t really want to know everything my wife does, because otherwise she will be boring to me."

Moreover, he also does not spend most of his time with his kids. He believes there is no point in spending every day with them and not talking to each other every other day.

Well, he would rather have an intense day together. He divulged saying,

"I’d rather spend one very intense day together. One second I’m watching Peppa Pig, the next I’m bike riding and then talking about girlfriends and love. It’s great."

Likewise, he also opened up about how his family would like to unwind. It turns out they would just go to a park or the pub with kinds and have a traditional English meal together.

Whenever Gino is not off to sets filming, he tends to stay home with kids and cook at home. When his wife is in the kitchen preparing a meal, Gino always throws his little tips at her out of habit which gets Jessica annoyed.

However, despite it, Jessica always does what she wants with the food but their children actually prefer food prepared by their dad.

Apart from it, Gino, who was previously jailed for breaking into Paul Young's wife, knows exactly how to clam his wife down when he needs to be forgiven. Every time there is something that needs to be settled, Gino walks in home with something sweet like chocolate cake with ice cream.

At times when he had been really bad, he gifts his wife with either a new car or a diamond.

Well, Gine sure knows how to keep his wife by his side!