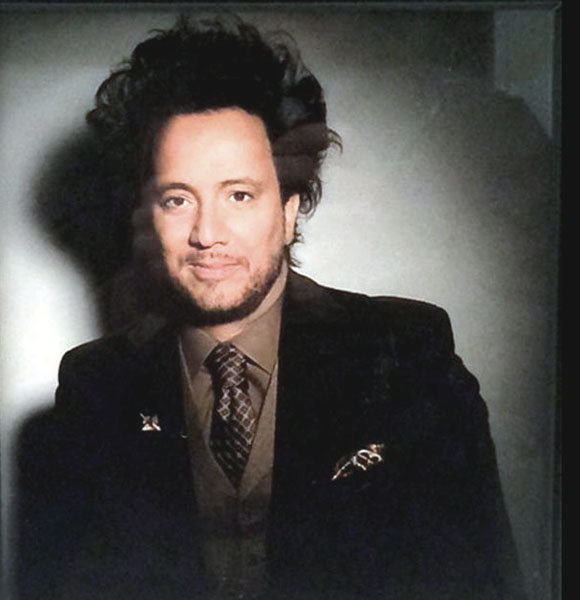 Giorgio Tsoukalos - known for Ancient Aliens show - is internet’s darling. His talk on aliens and his unique hairstyle has turned the guy into a meme. His fans across the world recognize him as the “alien guy.”

Building on the persona, he embraced the identity and started working as the host and producer of Ancient Aliens spinoff entitled In Search of Aliens in 2014.

Giorgio was born on 19th March 1978 at Lucerne, Switzerland. At the age of 12, he migrated to the US. Interestingly, he boasts a Greek-Austrian ethnicity and can speak five languages; English, Greek, German, French, and Italian.

In his adopted country, Giorgio went to New York’s Ithaca College and graduated in 1998 with a Bachelor’s degree in Sports Journalism and Communications. Post completing his education; he started his career as a sports promoter most prominently for Mr. Olympia.

The young man spent a whole of five years in the field of sports before discovering the Ancient Alien Astronaut Theory. After finding his calling, he studied under Chariots of the Gods author, Erich von Daniken.

Giorgio truly aced the new field as he went on to become Director of von Daniken’s Ancient Alien Society. Couresty of his work, he earns a salary of $4994.52, which adds to Giorgio’s net worth of $4 million.

Who Is Giorgio’s Wife?

Giorgio’s better half is Krix Beeble. The pair got married on 12th December 2012. The TV host and his wife dated for a while before getting engaged on 7th Nov and tying the knot the following month. Like Giorgio, his wife is also a creative individual. She is a photographer by profession and shares her creation via Instagram to the world. The pair are incredibly close and often flaunt love for each other on social media.

Krix has even put her relationship status on display on her Instagram bio. She lets the world know that she is a proud wife of Giorgio on the social media giant.

Taking about Giorgio’s religious views, he is an atheist. He is quite vocal about his disbelief of the higher being on his social media accounts. On 15th August 2011, he replied to a follower that he followed no religion. In line with his belief, the TV host also argued with his Twitterati's in 2015 that religions were the result of the visit of the extraterrestrial being in the past.

Giorgio’s narrative of aliens has become his trademark of sorts as he allegedly keeps blaming aliens for human problems. He is also blamed for spreading pseudo-scientific theory about aliens making contact with the ancient humans.

Add to that, he allegedly claims to be an author, but there is no research paper to be found.