By LRU Writer | On: May 22, 2019
Graham Patrick Martin didn’t know what he wanted to do in life...the path became apparent when he attended the New York performing arts camp called French Woods...It helped that post the training Graham booked Law & Order: Criminal Intent at the age of 15...Since then he went on to star in iCarly, Jonas, Good Luck Charlie, The Closer and Catch 22... 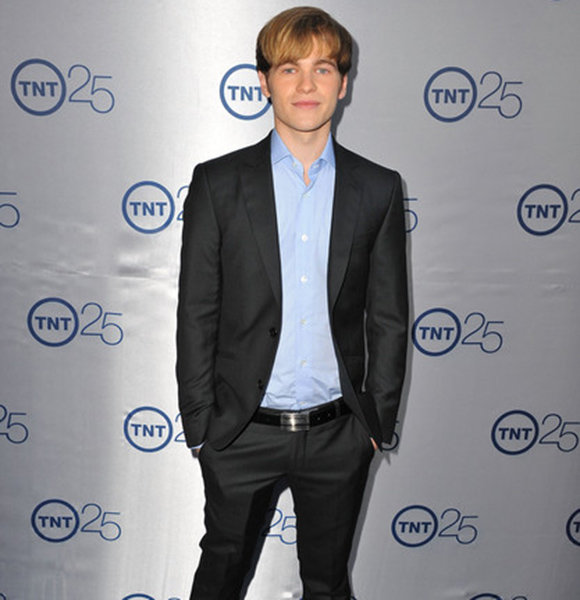 Graham Patrick Martin didn’t know what he wanted to do in life.

But, the path became apparent when he attended an art camp called French Woods. Post the training Graham booked Law & Order: Criminal Intent at the age of 15. Since then, he went on to star in iCarly, Jonas, Good Luck Charlie, The Closer and Catch 22.

Graham played Rusty Beck, a gay character, in Major Crimes so well that people began to believe that he liked men in real life. Add to that, his chemistry with on-screen boyfriend, Gus won everyone’s heart. People cheered for their romance and even shipped them to get married.

However, Graham’s brilliant gay portrayal turned out to be only excellent acting skills rather than reality. He is straight in real life.

He was dating girlfriend, Ginny Gardner in 2014. He walked hand in hand with the beauty and posed for pictures at the red carpet premiere of movie Somewhere Slow in January of the same year. However, it was the hacking incident in July 2014 that brought his love life to the forefront. Well, an imposter made a fake Twitter account representing Graham and even abused his girlfriend, Ginny. Thus, he had to go to the police to complain about the situation. The condition was terrible cause the faceless criminal would post 100 tweets in a day, and most of them would be offensive.

Post the incident the lovebirds refrained from making public appearances and kept to themselves. But, when Graham posted a cryptic post of loving oneself on Valentines Day 2018, it led people to speculate if he was single. However, the handsome actor didn't comment directly on his love-life.

Graham was born on 14th November 1991 in Thibodaux, LA. He boasts three siblings; one sister, and two brothers.

The young lad left his hometown with his family as the whole brood moved to NewYork to focus on his career. He even went to Fiorello H. LaGuardia High School at the new city. The move tuned out to be fruitful as he bagged movies and TV shows; Two and a Half Men, The Girl Next Door, The Anna Nicole Story, and Impastor, to name a few.

Also, Graham made his parents proud when he won Young Artist Awards for Outstanding, Young Performers in a TV Series and Best Performance in a TV Series (Comedy or Drama) – Leading Young Actor for The Bill Engvall Show in 2009.

Acting since a teenager, he has managed to earn a net worth of $4 million.

Talking about his measurements, he boasts a height of 5 feet 6½ inches (1.69 m) and a complementing weight. Besides acting, Graham is interested in football as he is a prominent New Orleans Saints fan. His whole family, especially his father Cornel Martin bond over their love for their favorite football team.