By LRU Writer | On: December 09, 2016
If you read any person's successful married life, then, you may find it joyful and inspiring. You might imagine that you could be that successful if you are yet to marry. Let's explore some stories, which is probably the exciting that we have ever found. She is the known sports reporter at ESPN and now living happy family life. 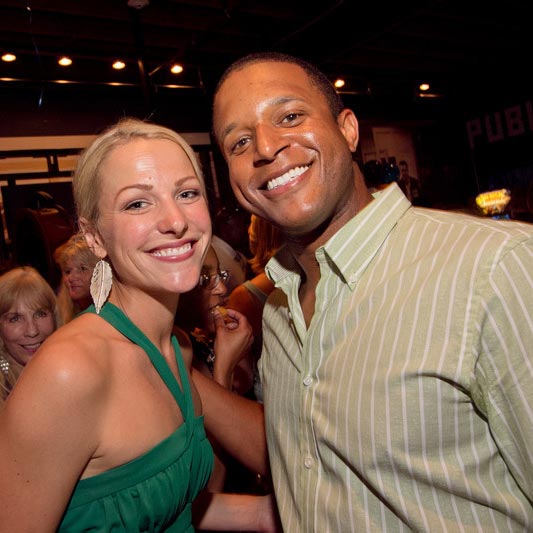 If you read any person's successful married life, then, you may find it joyful and inspiring. You might imagine that you could be that successful if you are yet to marry. Let's explore some stories, which is probably the exciting that we have ever found. She is the known sports reporter at ESPN and now living happy family life.

Lindsay Czarniak is an American sports reporter and anchor. She married Craig Melvin, an American journalist and news anchor, works at MSNBC and NBC News.

The Experience of the Competitors/Married life:

One of her friends introduced Craig when he arrived at NBC4 broadcast after completing the set at Beijing Olympics 2008. It was the time they first met.  Who could have ever thought that that friendly introduction could create such an amazing love story and moments!

These couples accepted the fact which Huffington had posted on 2011.

"We just wanted to hang out all the time," she says. Also, whenever she was with him, she felt calm and cared. Craig is the kind of guy that, when you are talking to him, he has this gift of making you feel like you are the only person in the world that matters." - Huffingtonpost.com

In 2011, The Marriage ceremony was held at Church of Holy City, 16th street, Washington. The wedding was simple and invited to their relatives only. Their married life went solidly and happily. Apart, on 2014, they have welcomed their first baby named Delano Melvin. Caption: Craig Melvin holds his first child Delano Melvin while the little looks at his father.

She even opened up in social media while experiencing the pregnancy for the first time. With Babble.com, she said,

“When you do pregnancy on air, it opens up for a whole different side of things. The hardest part for me was the in-between stage when you’re not completely showing but start to get to the ‘what do I wear?’ part. We had to get creative.”

After stalking Lindsay's Instagram's profile, she has been living euphoric married life. Here are some exciting moments.

Lindsay and her Husband in Sedona. She loves to trek:

What a Cute Couple: Husband and Wife?

With her First Boy (Son), Delano:

What a Happy Couple! Lovely smiles:

In 2016, Lindsay revealed that she was pregnant again and was taking a paternity leave from her work. She was ecstatic about a child and so were her coworkers. In 2016, November 5, Lindsay gave birth to her second child named Sybil “Sibby” Ann Melvin. She was reported to be 6 lbs., 6 oz., 20 inches long at the time of her birth. Their child was named by their son Delano, he called her Sibby, short for Sibling. Her husband shared about his experience with his wife's 2nd pregnancy in a blog recently. He talked about how he spent his time with his family after taking a paternity leave and how much it was important to him regardless of his love for his job and his fascination with news and politics as a whole , skipping arguing about the american election for his family. He speaks about his experience with family stating,

Turns out she was right. There’s no division — you multiply. Sure I haven’t changed as many diapers this time around or helped with as many newborn feeds, but I’ve discovered I’m valuable in a whole new way.

They are happily living in their family life, and it seems that there have not been any problems of any marital affair which would take to divorce. She is active in social media, and you can find her daily activities on Facebook, Instagram, and Twitter.

Well, despite her forties, she still looks beautiful and fascinating. She was once ranked as top 10 hottest sports reporter by top10for.com, and she is also quite a wealthy celebrity, with a net worth of $3 million according to celebrityworth.com.

Lindsay Czarniak was born on November 7, 1977, in Harrisburg, Pennsylvania and currently ages 38 years old. She joined at ESPN games, before that, she worked at NBC local television at Washington DC until 2011.

Lindsay was passionate about sports and engage her in games i.e. Field Hockey & Lacrosse. She worked in WTEV-TV, WTVJ, NBC Channel, and ESPN. She was the first reporter who covered the Indianapolis 500.