By LRU Writer | On: February 20, 2021
Heather Madden lived an ordinary life until she married a successful businessman. She got listed on the list of famous people after her high-profile wedding. Children Alert: Possibly Their Daughter. Heather posted a pic of a pretty girl on Twitter writing. The married couple usually hides from the bee of the media However In 2012, the duo contributed to the charity event hosted by The Children's Hospital of Orange(CHOC) Gala, which has been helping the kids with life-threatening conditions.Heather Madden is a known philanthropist. She is the chairman of the gala. 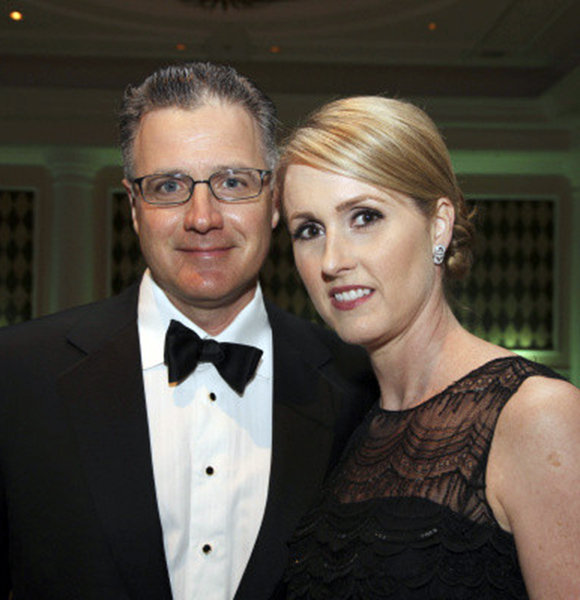 Heather Madden lived an ordinary life until she married a successful businessman. She got listed on the list of famous people after her high-profile wedding.

Since her high-profile journey started at the start of her married life, she is also enjoying her husband's high net worth and is equally making effort to keep their family life low-profile.

Heather Madden, who celebrates her birthday on 11 July every year, got married to American investor Jim Madden, but their exact marriage date has not been revealed.

See Also:- Pat Harvey's Wiki: Her Bio, Married/Family Life With Investor Husband And Daughter And Much More About Her

Though this marriage turned out to be blissful for Heather, the married couple usually hides from the bee of the media. They were seen together attending the amfAR Gala at Ron Burkle's Green Acres Estate back on 13 October 2017 in Beverly Hills, California. In 2012, the duo contributed to the charity event hosted by The Children's Hospital of Orange(CHOC) Gala, which has been helping the kids with life-threatening conditions.

Heather Madden is a known philanthropist. She is the chairman of the gala. In 2010, the famed Children's Hospital of Orange County began a $125-million fundraising campaign. In 2013, the hospital gala raised an impressive half-million dollars with the help of 300 guests including presenting sponsors Jim and  Heather Madden.

Jim Madden gifted his gorgeous wife a $ 10,000 worth Bulgari diamond bracelet in 2011. He had won the bracelet during a for-charity auction organized by the CHOC gala.

Heather's husband Jim is a Private Equity investor focused on technology-enabled business services companies. He is the co-founder and Managing Director of Carrick Captial Partners, which launched $180 million private equity fund in 2012.

Jim also founded BPO focused company Exult and served as its Chairman and Chief Executive Officer from November 1998 to 2004. Within five years, Mr. Madden grew Exult from a concept to more than $500 million revenue company.

He went on to lead its successful IPO in June 2000. He is also credited with innovating human resources led business process outsourcing strategies during his time with Exult. In 2004, the company was acquired by Hewitt Associates for US$795 million.

You May Also Like:- CNBC's News Anchor Amanda Drury Is Married To An Australian Investor. Meet Husband Tim Drury And Know Her Age

The business tycoon is also involved in several other successful technology-enabled services companies, including Axiom, Genpact (NYSE: G), Mavenlink and ServiceSource. Nevertheless, he has also invested in numerous other companies including Saviynt, Infinia ML, Mavenlink, Perfect Sense, and Instamed.

With his fast-moving business motive, he has earned a massive net worth, which has not yet been not disclosed. Likewise, he hasn't disclosed his birthdate and age, but he looks like someone who is in his fifties.

Heather Madden gained the immense popularity with her married life. Since she has kept her married life under the shed, the couple has not revealed anything about their family life.

The husband-wife duo is an irregular visitor to social media. Both of them have Twitter accounts, where they have posted a few personal life posts. However, most of their posts represent their professional life rather than family life.

Since she has revealed that she has a step-daughter named Jennifer Madden, she has shared any further information about her. With her married life to businessman Jim Haden, she is a step-mom to her husband's daughter Jennifer Maiden.

Read Also:- Married in 1999, 'Money Honey' Maria Bartiromo With her Investor Husband. Her Net Worth and Divorce Controversy

Well, she has not mentioned anything about her step-daughter in an interview and neither has shared the glimpse about how she looks like. However, back on 31 January 2018, Heather posted a pic of a pretty girl on Twitter writing "Future #CHOCGala chair....love the #HarryWinston necklace!!!." Moreover, Heather has not clearly mentioned whether the little girl is his step-daughter or not. Is the elegant-looking girl their daughter?

On 3 February 2018, the loving husband of Heather posted some snaps from a CHOC gala event. Of course, everyone wanted snaps with the charming chairperson, heather.