A Host of Animal Planet’s, “River Monsters", Jeremy Wade and his Adventures while filming full Episodes of the Program

By LRU Writer | On: June 13, 2017
Jeremy Wade was caught in midtown Manhattan recently, far away from his likely locations of deep Amazon forests or unknown waters of South America. He is the singular star and host angler of the top ‘Animal Planet’s’ show, ‘River Monsters.’ He is seen fishing for the most dangerous and rare water beings across the world.

Jeremy Wade was caught in midtown Manhattan recently, far away from his likely locations of deep Amazon forests or unknown waters of South America. He is the single star and host angler of the top ‘Animal Planets show, ‘River Monsters.’ He is seen fishing for the most dangerous and rare water beings across the world.

Caption: Jeremy Wade with his catch, a Giant Pregnant Stingray.

Almost all programs featured by Animal Planet Center the adventure in wildlife but ‘River Monsters’ centers' water creatures especially, fish, unlike the commonly featured tigers and elephants. The show takes Wade to some of the most rural, dangerous and uncharted waters around the world. The show is a part fishing show, part detective procedural and MythBusters.

They set the location by selecting some of the mysterious and gruesome incidents including the attacks in the water. Then he investigates the case by series of experimental fishing and concluding the real cause behind the incident. The Level of adventure in the show can be seen by the size of fish Wade Catches armed with terrifying, toothed things that will give you nightmares. So, let me tell you, the show is named ‘River Monsters' for a reason. 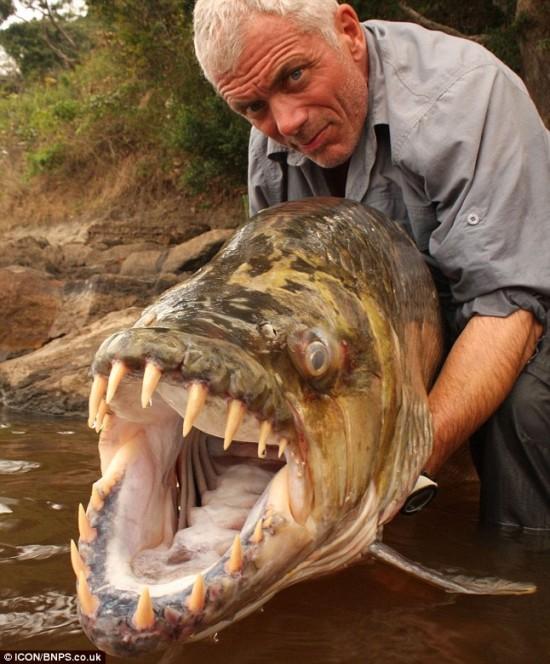 The full episodes of ‘River Monsters’ is filled with action and adventure that you do not want to miss. In his career, Jeremy Wade has faced multiple risks including attacks from the water life, detainment due to suspicion as a spy, a close death call due to Malaria, threat at gunpoint, nearly struck by lightning and survival from a plane crash.

As per his show, he has come in contact with the rarest of species, broken records of catching the biggest species and also the discovery of a new species of Arapaima Fish. The show has recently finished shooting for season 8 where they travel the sea instead of rivers. Wade is excited to try something different and much difficult. You should catch his show and join him in his adventure towards the saltwater for the first time. You can share the experience of pulling out large man-sized fishes from the water and change our perception of the water bodies as a portal to a world with strange creatures. However, his message in his words from the show is,

"The way that we live with potentially dangerous animals is not to kill them, but to understand them and to coexist with them. I make a big point of putting (fish) back into the water."

Tweet your fishing pic with #ReelMonster and we may put it on TV during the River Monsters Aftershow tonight! pic.twitter.com/VFbsPWZ4Ib — Animal Planet (@AnimalPlanet) May 17, 2015

Jeremy Wade Returns For The Final Season Of River Monsters:

Jeremy Wade is back on one more adventure, and he has a score to settle. The first episode of the Season 9 of Jeremy Wade's hit Reality Tv show 'River Monsters' aired on April 23, Season 9. Wade hinted some content for the final season saying,

“There is one fish that I failed to get, and we go back for a rematch, There’s an old score that needs settling.” According to sources, the newest season of “River Monsters” will include Wade's investigation into the trails of an unknown sea monster, killer fishes that impale snorkelers, an 'ice cold killer' as well as the infamous Killer Catfish.

Wade confessed that the content size and the plans for the new season isn't that long but insisted that it was no reason that would cut the season short as well as explained why they were ending the Tv show stating,

“The thing about ‘River Monsters’ is our subject matter is finite, It’s not something like a home makeover show where you can keep going.” and explored other issues for the show such as threats of overfishing, pollution, climate change as well as harder prior planning for the annual river cycles. Anticipations for the final season remain high as Jeremy plan to make the final episodes of River Marathon his finest.