Is Wendi Nix Really Been Divorced? If So, To Whom She is Referring As Husband in Twitter? Married Again?

By LRU Writer | On: May 02, 2019
For any sports fan, he must be somewhat familiar with the sports reporters and hosts from his favorite sports show. But what he knows is merely the professional side of the journalist. Right now learn about one of such beloved sports journalist Wendi Nix and her personal life. Also find out details from her marital life.

When a beautiful sports journalist is on the television screen reporting and rising high in fame, every fan wishes to know about her personal life.

However, some celebrities prefer privacy in their personal life, and when a star maintains a tight guard over the personal life, then least information circulates in the media. And, only the information the celebrity wants to share, is known to the fans.

Sharing a similar story is Wendi Nix, who was once married but failed in the relationship. So has she moved on from the past? Did she give marriage a second chance as she mentions about her husband in her tweet? Let's dig in to find the answers!

Wendi and her ex-husband Ben Cherington- the former general manager of the Boston Red Sox, reportedly met at the University of Massachusetts and fell in love with each other. And eventually, Wendi exchanged wedding vows and got married to Ben. But, the other details regarding the marriage have not been disclosed yet.

However, their relationship could not survive long and ended in a divorce silently. Wendi's statement in an interview with the Myrtle Beach Tribune in 2010 proved she separated from her husband.

Following the separation, Ben Cherington moved on in his life and married Tyler Tumminia, n a wedding ceremony held at  Brooklyn Borough Hall on 6 April 2012.

But, Wendi is one of the people, who like to seal their lips when it comes to her private life. Still, her fans wish to know - Has Wendi Nix moved on from her past? Did Wendi Nix marry again?

Despite all her efforts to keep her husbands identity a secret, Wendi is not perfect. She makes some slip ups here and there. Wendi mentions her husband every now and then on her twitter revealing little nuggets of information about the mystery man. i

In a tweet on 5 October 2014, Wendi confirmed the rumors of her being married. In the tweet, Wendi congratulates her husband and also reveals that he is a New York Yankees fan.

For good, Hannah Strom posted a group picture with Wendi Nix, NBC correspondent, Dan Hicks, Trista Sutter, and others along with a mystery man, through Twitter on 14 February 2016.

Some guy behind Wendi is photobombing you!

Following the tweet, Wendi acknowledged the mystery man as her husband and accepted the fault as she blocked his face in the photo.

That would be my husband! Pretty much my fault I boxed him out! :) Moreover, Wendi's complained about her husband's language when he was watching a game. And Wendi's tweet on December 2015, suggests that he is a fan of New York Jets while Nix is a strong Carolina Panthers fan.

However, that is all Wendi blessed her fans with. No other details of who the mystery man can be found out on the internet. Wendi's fans are just happy to know that she has moved on from her past relationship.

Another Couple With Lovely Daughters:- Vanessa and Kobe Bryant Wiki, Net Worth

Furthermore, Wendi is a mother of two beautiful daughters and takes out time from her busy schedule to spend with her daughters. She even flaunted her daughter through Twitter on 09 December 2017, where her daughters are enjoying winter of 2017 in the city of New York. 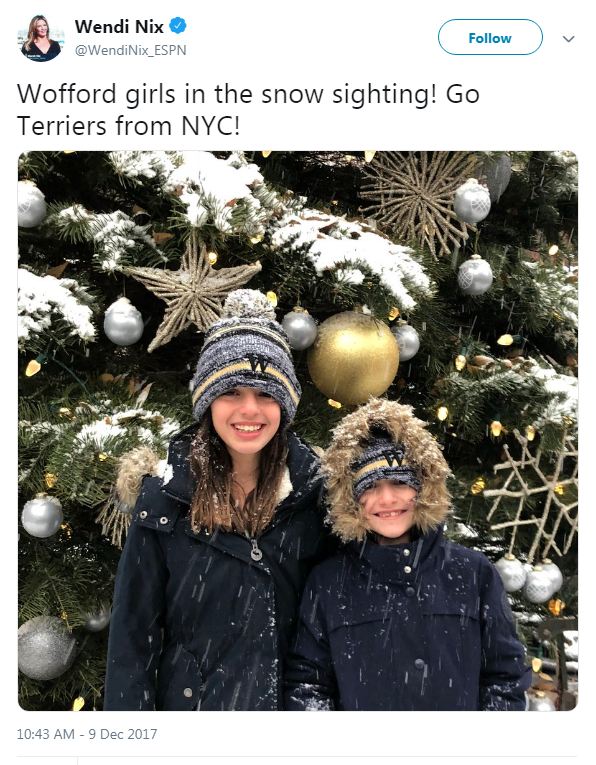 Wendi is leading a blissful married life with her family in their paradise. And the hope of her opening up about her personal life remains alive in the heart of Wendi's fans.