By LRU Writer | On: July 16, 2019
Jaelene Hinkle is an American...defender...she gave up the chance to play in the world cup because...born in...has three siblings...in a relationship with...engaged to boyfriend of... 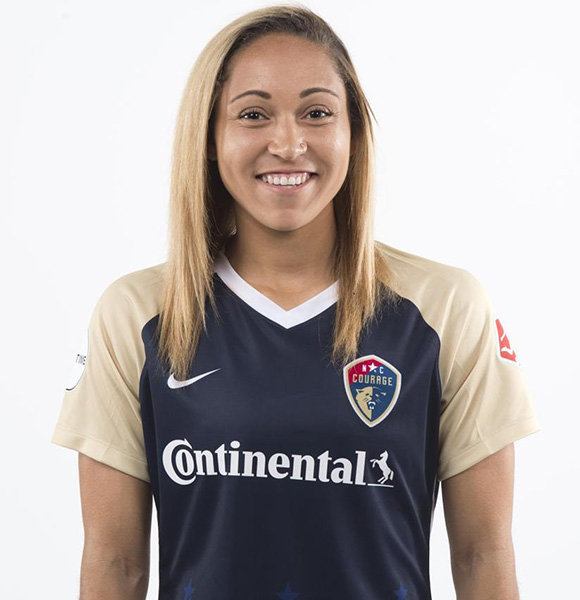 Jaelene Hinkle is an American footballer best known as the elite defender for North Carolina Courage. She has also made her way onto the United States Woman's National Team.

Jaelene has played for the international roster on multiple occasions and led the team to many victories. Nevertheless, she became the talk of the town after the Women's team won the 2019 World Cup. Find out the controversy surrounding the young athlete and more on her life below.

Born in the city of Denver, Colorado in 1993, Jaelene Hinkle belongs to the White ethnicity. She celebrates her birthday every year on the 28th of May.

She is the second youngest child of her parents. She has two elder siblings: a brother named Jeffrey and sister Jordan, along with a younger brother named Jamal. With her siblings, Jaelene attended Valor Christian High School in Highlands Ranch, Colorado.

Having spent most of her time physically active because of her profession, the athlete boasts a fit figure. She has a weight of 61 kgs and a height of around 5 feet that goes well with her stature.

Jaelene has been in a relationship with a man named Matthew Tyler. They started dating sometime in mid-2018. Together for over a year, the couple has spent some memorable times as lovers.

After a brief period of being together, the couple got engaged in May of 2019. Jaelene appreciates her partner's presence in her life, which is apparent from the footballer's Instagram feed. Matthew also returns the favor as he has been seen calling Jaelene as his inspiration.

The pair is yet to get married, but with the romance on air, a wedding could soon be on the cards.

The defender started her professional club career in 2015 with Western New York Flash. Bringing her A-game to the pitch, Jaelene played all 20 games in her first season and even scored a goal while playing as a defender.

For her second season, she provided the crucial goal that led to the Flash winning the 2016 National Women's Soccer League against Washington Spirit.

She continued to carry the mantle in 2017 and led her team - which is now rebranded as North Carolina Courage - to win the 2017 NWSL Shield. With her excellent performance, she managed to bag the NWSL Team of the Month in March & April 2018. The soccer player has also had her fair share on the international level. She earned her first international cap on the 21st of October in 2015 in a friendly game against Brazil that ended in a 1-1 tie.

Out of her career, the star athlete has been able to garner tons of fame. And along with it, she has also been successful in terms of finances. Her exact net worth figure is not known. But, with a salary cap of $421K, it would not be wrong to assume her bank account balance amounts to millions.

On July of 2019, Jaelene became the hot topic of the football world after she did not play for the United States Women's National Soccer Team (USWNT). The controversy also brought a thing up from her past. Back in 2017, the defender had not appeared for the international friendlies against Sweden and Norway.

Jaelene later revealed that she refused to appear for the games because of having to wear the LGBTQ Pride Month jerseys.

The matter came into the attention of the media after a fan dug up an old interview of Jaelene with CNN. In the interview, Jaelene accused the USWNT of not being open to Christians.

Later, Goalie Ashlyn Harris took to Twitter to clear things up. She mentioned that it wasn't Jaelene's religion that was the problem but her intolerance towards LGBTQ individuals.