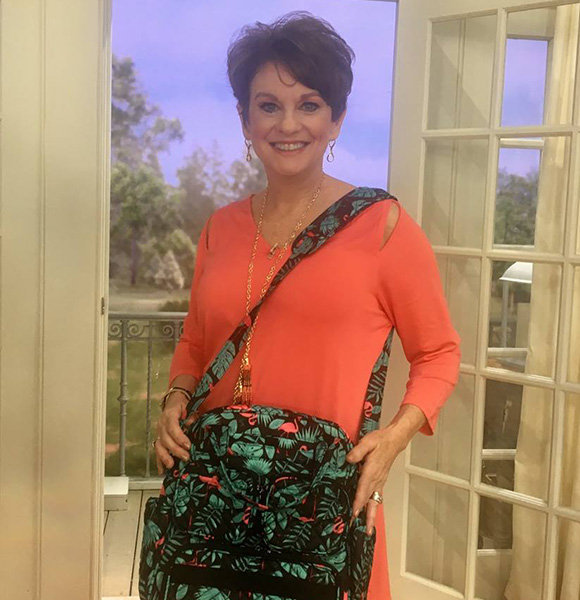 For Tv Host, Jane Treacy QVC is more than life. Having contributed whole of her career to the network she has been ably paid back by the network, whether that be in terms of professional growth or that be in financial terms, more specifically her net worth.

She is not only prolific ahead of the camera but also equally adept at managing her affairs off it. Behind the cameras, she has a beautiful life with husband and daughters that her followers might not know about. Despite her old age, she is actively indulged with her grown-up daughters and never misses a chance to join the fun with them.

Whether it would be going to Disney World or Halloween party, Jane is always on the front celebrating life with her husband and daughters!

28 Years In Love With Husband; Party With Daughters

Having spent more than 30 years in QVC, Jane has also been similarly stable in her married life. In an age of 'fender bender' where marriages and divorces take no time, she is setting an example of how married life can be nurtured to make a great relationship.

The beautiful American journalist, blessed with average height and slender feet, shares a very romantic bond with her husband, Sean Treacy who have been married for almost three decades. The couple was pronounced as husband and wife back on 11 November 1989. Since then, the couple has been together hitting newer heights in their union every passing day.

The married couple is just two years away from touching the three decades of married life. And celebrating her marriage, she Instagrammed an adorable picture with her husband wishing him on their 28th wedding anniversary in November 2017. Despite being busy with their own work, the happy family of four always spare their time for each other. Jane Instagrammed on August 2017 a beautiful family picture from their family vacation to Austria which she claimed as the "best vacation ever."

Another QVC host:- Where is Lisa Robertson From QVC? Fans Curious Amid Death Speculations

Disneyland seems to be the veteran anchor's go-to place as she is a regular at the famous landmark as evidenced by a quick swap over her Insta wall. Her feed is littered with time spent well with her daughters and her adorable captions about how lucky she has been to have her daughters.

And it's not just Jane who is quick to show about her love and affection to her kins as her daughters also reciprocate their feeling to their mother. Her youngest daughter--aged 17, Instagrammed an adorable mother-daughter picture wishing Jane on her 55th birthday quoting her to be the best mom in the entire world.

Similarly, the family is always united on festive days, and make sure to dine at one place whether that be Christmas or the Easter. On Christmas 2017, her daughter provided a small glimpse of what the Treacy household is like during X-mas posting the family picture quoting "No place like Home for the Holidays!" Even at the age of 56, Jean's enthusiasm of a mother has not dwindled. Don't believe me, just ask yourself who goes to the Disney World even at the 50s. The answer is spilled all across the beautiful anchor's wall!

Bio:- Loads Of Struggle Led To 30 Years With QVC & Staggering Net worth

While it looks to the outside world that Jean is now leading a fabulous life with little hardship and struggle, it did not come like a flying kite to her. She had to endure a lot to meet the success and be at a position she is now.

During her college days, she had done internships and worked at CNN, but after her college ended, she was rejected by more than 70 networks.

Read Also:- Jacque Gonzales - Former QVC Host Is Married And Has A Husband! But Her Age Deceives It All

Her career started taking legs after the Philadelphia native had her first job with a local radio station. Her first 'Yes' in a job interview was by a small New Jersian station where she hosted a weekly show and nightly news. Then she worked as the host and producer of Catholic TV show' "Real to Reel" in her hometown of Philadelphia.

During that time, she saw the vacancy on the paper for the hosts of QVC --a new network and gave an interviewed more in hope rather than confidence. However, that was to be her big break and she landed her first TV show with QVC. She was 24-years-old when she got hired by the network on 18 December 1986. Jane is given a big cake to celebrate her 30 years with QVC network (Photo: community.qvc.com)

And ever since that chilly day in December, she has been associated with QVC. Her 30 long years of contribution to the network has not gone unseen as she is one of the highest paid anchors in the network, commanding a salary of more than $100k per annum, which has helped boost her net worth supposed to be in millions.

On top of that, she was provided with a moment to cherish her whole life after the network organized a special party for Jane to celebrate her 30 years of contribution.

And the star anchor's feet still have lots of miles on it and is showing no signs of stopping, even at the age of 56!