By LRU Writer | On: August 20, 2019
Jarrett Stidham found an ideal girlfriend in...got engaged after asking his longterm muse in...married his fiancee turned wife in...turned 23 years of age on...hails from a family of...created buzz as a high school athlete in...owns a net worth of... 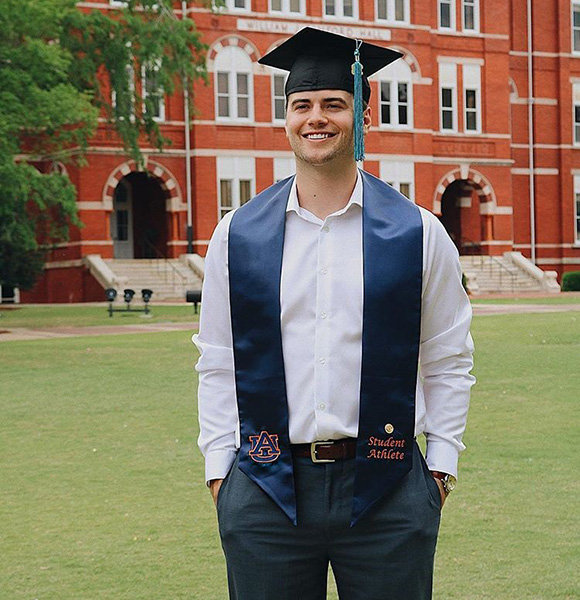 As it does with every NFL star quarterback-in-the-making, Jarrett love life became a subject of curiosity upon his draft. A breeze through the piece shall shed light into the intimate aspect of his life!

Jarrett met the love of his life, Kennedy Brown in 2015 while attending Baylor University.

A native of Kinghood, Texas, Kennedy hails from an affluent family. Her father Tad Brown, a former NBA athlete, got promoted to Huston Rockets' CEO in 2006.

At Baylor, Jarrett was a celebrated football athlete while his once-girlfriend Kennedy played for the University's women's soccer team. Together, they became inseparable while hogging the crown of "it" couple.

Never shy to show off his girlfriend on social, Jarrett dated Kennedy for three years before popping the big question.

Engaged in July 2018 at the Lake Brownwood in Texas, the duo took to their respective Instagram to announce the engagement. In his post, Jarrett labeled Kennedy "the girl of my dreams." Meanwhile, his then-fiancee replied with the tag of "my forever."

Precisely a year as an engaged couple, Jarrett and his then-fiancee Kennedy finally tied the knot.

Married at The Astorian, Houston, Texas on 7th July 2018, the duo's wedding was an intimate affair. In front of select few guests, they shared the "I DOs." Notable personals in the attendance include the likes of Kerryon Johnson and Rhett Lashlee. Following the wedding, Jarrett and his wife Kennedy flew to the Bahamas for the honeymoon. Instagramming from their trip, the duo shared adorable photos together.

Now age 23, Jarrett was born on 8th August 1996. Discussing his family, he is the son of Rochelle and Juder Stidham.

A native of Corbin, Kentucky, Jarrett calls Stephenville, Texas his hometown. It is during his years at the Stephenville High School that he created buzz because of his footballing exploits.

Upon his draft, the Baylor University alum penned a 4-year contract worth $3.1 million. By signing the deal, he pocketed $633 thousand in signing bonuses. Per the agreement, he would earn an average annual salary of $788 thousand.

Considering his marketability, Jarrett shouldn't have trouble landing multi-million endorsement deals, which should solidify his burgeoning net worth.