By LRU Writer | On: April 05, 2019
Jerry Rice, age 56, is a former NFL wide receiver. Considered one of the greatest players of the American football, he played in the coveted game for 20 long years. During his stint, he managed to win the Super Bowls three times with San Francisco 49ers and even managed to snag Super Bowl XXIII MVP title...On His Married Life... 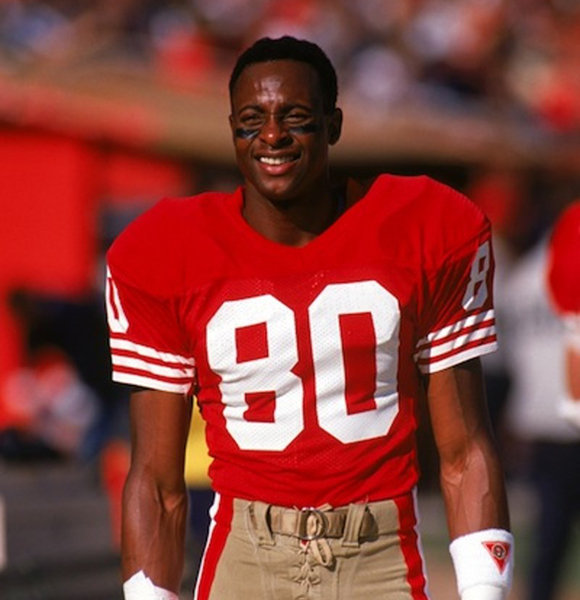 Jerry Rice, age 56, is a former NFL wide receiver. Considered one of the greatest players of the American football, he played in the coveted game for 20 long years.

During his stint, he managed to win the Super Bowl three times with San Francisco 49ers and even snagged Super Bowl XXIII MVP title.

Jerry got married to Jacqueline Bernice Mitchell on 8th September 1987. Things were going well for the couple; they had become new parents to daughter Jacqui Bonet Rice in June of the same year.

On the other hand, Jerry who started his career in 1985 was also doing very well professionally. Along with the field success, happiness came in abundance to the family when the brood increase from three to five. The addition to the family was son Jerry Lee Rice, Jr. ( born 1991) and daughter Jada Symone Rice (born 1996).

However, the happiness didn’t last long as the couple formally divorced in 2009. Well, the twist in the story was Jerry was already dating Latisha Pelayo since 2008 while still being a married man. No matter how he started dating Mexican beauty, their love stood the test of time. On 24th March 2018, Jerry went down on his knees and proposed his girlfriend of 10 years at DeBartolo Family Foundation All-Star Charity Gala.

While the engaged pair are yet to tie the wedding knot, there is not an ounce of doubt about Jerry being gay.

Jerry has his high school official to thank for giving him a start at the American Football.

Well, the Oakland Raiders alum was quite a mischief in his high school. One day he was on his way to skip school when he was spotted by the said official. A great runner himself, the official chased Jerry but, couldn't catch him. Before the poor guy knew, teenager Jerry was out of his sight.

Of course the next day, the football pro was reprimanded, but the officer took him to the school football team recognizing his athletic abilities. It helped that he had a height of 6 feet 2 inches (1.88 m) and weight suitable for an athlete.

Fast forward, he completed his education at M.S. Moor High School and joined Mississippi Valley State University ( 1981-85). Straight out of college, he was drafted by the NFL. He went on to become the greatest wide receiver ever to play. Recognizing his contribution, he was inducted in College Football Hall of Fame in 2006.

Till date, Jerry is the only non-kicker to score over 1000 points in his career in NFL history. The now-retired footballer is also a recipient of Pro Bowl status on 13 occasions.