By LRU Writer | On: December 07, 2018
Retired Footballer from NFL, Victor Cruz, was almost married once. He was involved with...for years before their relationship turned sour. Victor shared a baby...with his girlfriend... making them a family of...years later he proposed...and the pair planned to get married on...but the pair parted ways silently...Victor was spotted sharing romance with...back in...and since then they have together.... 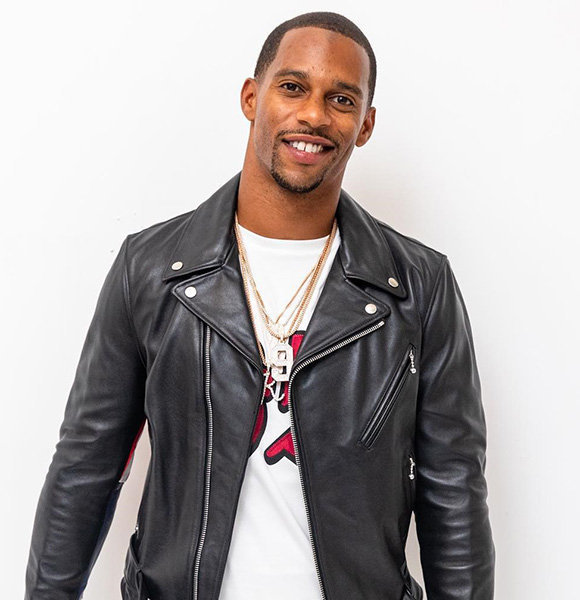 Former American wide receiver, Victor Cruz, retired from NFL and now has his hands in television world as he joins ESPN as an NFL analyst. After his college career balancing between his education and knack for football, Victor landed himself in New York Giants.

His career as football took off since then, but his personal life had something else in store for him. He once shared a family with his former fiance but without any notice, their engagement came to end.

However, he found romance with his current girlfriend and they seem to be getting along really well!

A Family With Former Girlfriend-Turned-Fiance, Separated In Silence

Victor Cruz, who signed with Chicago Bears back in 2017, was almost married once. He was involved with Elaina Watley, who is a brand strategist in New York City. Victor and Elaina shared years of relationship before they parted ways in silence.

The pair began their romance back in 2003 and was together for a long time. The couple was even engaged and was set to get married but the romance between the two suddenly turned sour leading to their separation instead.

After being together for almost a decade, the pair took their relationship to another level from being girlfriend and boyfriend to being parents. They welcomed their first baby together Kennedy in 2012.

Victor shared a happy family with his then girlfriend and the mother of his only child. He was balancing between being a father to his baby along with his career as an athlete. However, the duo was raising their kid right.

As their only child grew older, the pair was determined to give their relationship a name. In July 2014, Victor got down on one knee and presented his girl with a ring while asking her to marry him.

Shortly after the proposal, Elaina took it to Instagram to reveal the news of her engagement to her followers while showing of the sparkler. Back then, the newly engaged couple was planning for a summer wedding which would take place in New Jersey the following year. Victor also opened about his excitement taking with E! Online. He said,

“It’s really exciting. We don’t want it to be a sit-down snooze fest. We want people to party. This is a wedding. We don’t get this back.”

The pair seemed to be getting along really well and determined to tie the wedding knot until Victor was alleged of cheating on Elaine. Through some outlet, a screenshot of a message from Elaine to a group of Victor mistresses surfaced the media giving rise to their relationship conflict.

You may like: NFL Star Cris Collinsworth Torn Between Career & Family With Wife?

Even after the conflict, the couple appeared to be happy sharing a family together. But now, the pair seems to have parted ways with an end to their relationship as Victor was spotted holding hands with his new found romance.

After calling off an engagement with Elaine, Victor now shares a loving romance with his current girlfriend Karrueche Tran, an American actress and model. The romance between the two surfaced in December 2017 after they were spotted holding hands in LA.

According to an insider, they remained friends for a while before acknowledging the love for each other. Back then the insider opened up about their budding romance with US Weekly saying,

“They really like each other and are trying to make it work and see where it goes. They were and have been friends for a while and she was at his private birthday dinner in November.”

Well, their friendship has surely laid a strong base for their love to grow. Since the beginning of their romance, the pair has been inseparable as they have been taking vacations together while sitting together in the front row at fashion shows. Victor, who has an estimated salary of $75,637, seems to admire his current girlfriend while letting the world know about his love for her. Taking with Us Weekly, he opened about how he felt for her saying,

“She’s very much the one for me. I love her very much. We’re still growing and learning things about each other as we’re going along.”

Well, by the looks of it, Victor seems to have finally found "the one" for him and seems determined to have her around all his life.