Who Is JoJo Siwa Dating? Her Personal Life Status Now 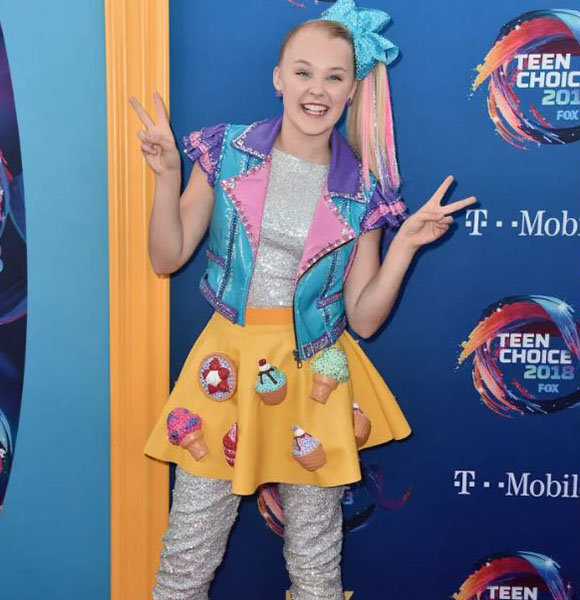 JoJo Siwa is an internet sensation, who is best known for her titular YouTube Channel, where she posts varieties of contents ranging from comedy sketches, vlogs, Q&A's, challenges to many other fun videos. She has more than 10 million subscribers on her YouTube channel.

JoJo is also a talented dancer who started dancing at the age of five; she is trained in hip hop, jazz, contemporary, and lyrical dance forms. Further, she was among the top 5 finalists on the second season of the Lifetime series, Abby's Ultimate Dance Competition.

JoJo Siwa was born as Joelle Joanie Siwa on 19th May 2003 in Omaha, Nebraska, USA, to Tom Siwa and Jessalynn Siwa.

Her dad works as a Chiropractor at Northwest Chiropractic Center, and her mom is a trained dancer who runs a dance school.

Apart from her parents, the Youtuber also has an elder brother named Jayden Siwa; JoJo's brother is also a celebrity dancer and an Instagram star.

JoJo Siwa is reportedly in a relationship with aspiring model Elliot Brown. The duo first sparked dating rumors after JoJo shared a picture with Elliot on her Instagram account on 25th February 2020. The post featured a picture of JoJo and Elliot in matching outfits with the caption-

Twinning for the win!! E didn’t have shoes that matched his outfit so i made him wear some fancy sparkly high tops! i’d say we look pretty cool

JoJo's career started at a very young age. Being inspired by her mom, she also developed a true passion for dance.

She had her first brush with fame as a contestant on Lifetime's dance competition show. Although she did not win the show, she gained a huge fan base. Later, she competed on Dance Moms with her mother and eventually won the show.

In 2015, she created her YouTube account and started uploading various content. She first got attention on YouTube after releasing her song, I Can Make U Dance, in November 2015, after that her song Boomerang released in May 2016 became a massive hit.

Apart from her dance and YouTube career, JoJo is also an entrepreneur, who has successfully monetized her big cartoon-like bows and other accessories. Her accessories are sold at Claire's, a fashion accessories company for young girls.

According to Celebrity Net Worth, JoJo's multi-dimensional career as a YouTuber, dancer, singer, actress, model, and reality TV personality has rendered her a net worth of $12 million.