Jonathan Van Ness Only Man Without Boyfriend Or Husband In Queer Eye!

By LRU Writer | On: September 25, 2019
Jonathan Van Ness is the grooming expert in one of the best Netflix series of 2018 Queer Eye. Queer Eye, however, was not the first foray into acting for the hairstylist as he had already created a name for himself as the man behind the chair in...The handsome hunk is the only...in the series and harbors a dream date with a guy with a mix of...What's more, the Quincy-Illinois native is a role model to the...after establishing himself in Hollywood despite his past troubles... 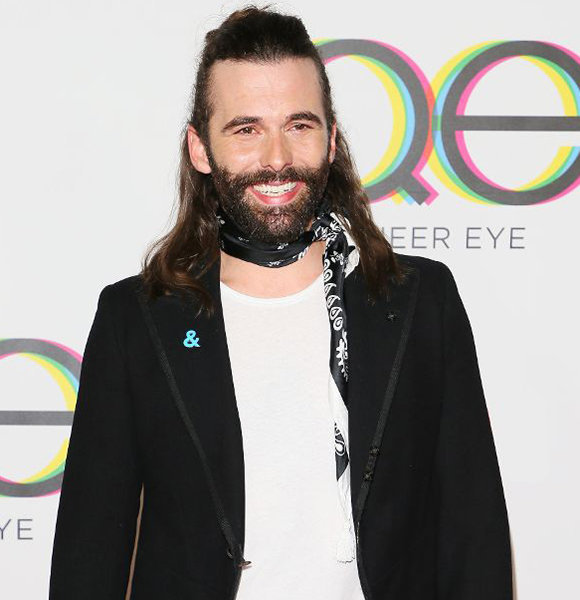 Jonathan Van Ness (JVN) is the grooming expert in one of the best Netflix series of 2018 Queer Eye. The series, however, was not the first foray into acting for the hairstylist as he had already created a name for himself as the man behind the chair in Gay Of Thrones.

The handsome hunk is the only bachelor in the series and harbors a dream date with a guy with a mix of a brutal physicality and brain. What's more, the Quincy-Illinois native is a role model to the gay youths and kids, after establishing himself in Hollywood despite his past troubles.

Netflix's series Queer Eye, the reboot of Queer Eye For The Straight Eye, has received widespread praise and thrust the five gay professionals coming together for the show to unchartered heights in Hollywood.

The five persons, also known as 'Fab Five' can be seen in the show talking about their boyfriends and husbands except for Jonathan. The hairstylist with a contagious self-belief and love for self; has not indulged in talks about a relationship in any of the eight episodes of the Queer Eye in 2018, leaving viewers wondering if he was dating or single.

While he did his best to hide any news of a possible relationship, his dating life was unveiled in 2019 nevertheless.

According to reports, Jonathan and his boyfriend Wilco Froneman were dating for a few months before separating. Jonathan himself confirmed the split. Through a post on his Instagram handle, he cited a few words from  Ariana Grande’s hit breakup song “Thank U, Next.” He later changed his caption. It read :

“Please don’t go in on Wilco, he doesn’t need the anger & I don’t want to see him suffer so just know I’m all good & sometimes people break up — Love you all so much.”+

He also disabled the comments sections on his post.

And for all the fans and admirers its good news, the hunk with a tall height is single, and despite a hectic schedule is single in 2019. However, he was rumored to be dating his Queer Eyes co-star, Antoni Porowski.

While Jonathan was seen kissing him and even called him bae, the two have denied the dating rumors.

Speaking to The Wrap, the star of Gay Of Thrones - a weekly parody of HBO's Game Of Thrones - detailed about his busy schedule, saying:

"I would shoot in Atlanta Monday through Friday, fly to LA, do hair, like, for twelve hours on Saturday and then go to Funny or Die and we’d watch ‘Game of Thrones’ on the East Coast feed, write it, shoot it, produce it, all of it by Sunday night. And then I would be on like the 5 a.m. flight out of LA back to Atlanta every Monday, and usually, I’d go straight to set." Jonathan Van Ness on the Emmy winning Funny Or Die's series 'Gay Of Thrones' a weekly parody of Game Of Thrones (Photo: nerdist.com)

With such a busy schedule it must have been difficult for the star to make a new boyfriend, or it could just be that he is waiting for a perfect partner.

In the sixth episode of Queer Eye, the actor explained his dream guy who needed to have the physicality of The Rock and the personality of Canadian Prime minister Justin Trudeau.

Well, good men are hard to find, but men like Jonathan's dream mix of silk and steel is even harder.

However, some sad news was revealed through Jonathan. On his new memoir titled Over the Top released on 24 September 2019, the Netflix star revealed he is HIV Positive.

The news is devastating to anyone and was most saddening for the 32-year-old. He described that the day was a devastating one, but has come out as a proud member of the beautiful HIV-positive community.

Jonathan opened up from an early age that he was a gay which culminated in a tough childhood where he was regularly bullied due to his sexuality. However, after struggling to get grips to the bully, he found a way out from it through comedy. The actor took up humor and even became a cheerleader in his high school, making him the first male cheerleader at Quincy High School.

Then he moved to California in 2009, and three years later he had a heartbreak. He lost his stepfather because of cancer, and his family was a mess. This led the stylist to take up eating, which quickly became an obsession. Jonathan gained more than 70 pounds in just three months after his fathers' death. However, it quickly dawned on the star's mind that he would have problems finding a dating partner with such a massive weight leading him to the road of weight loss. What started initially as the act to find himself a right partner later turned into self-realization that it was for him. He said to InStyle:

"Oh my god, I have to lose this weight because if I don’t, then who’s gonna date me?” [Now], my working out is about me. It wasn’t always like that, but that’s where it’s landed."

The star, who has always been a preacher of body positivity, feels that he has come a full circle from being a bullied kid to a gay role model. His message to all kids and youths, however, has always remained the same, 'Be True To Yourself.'