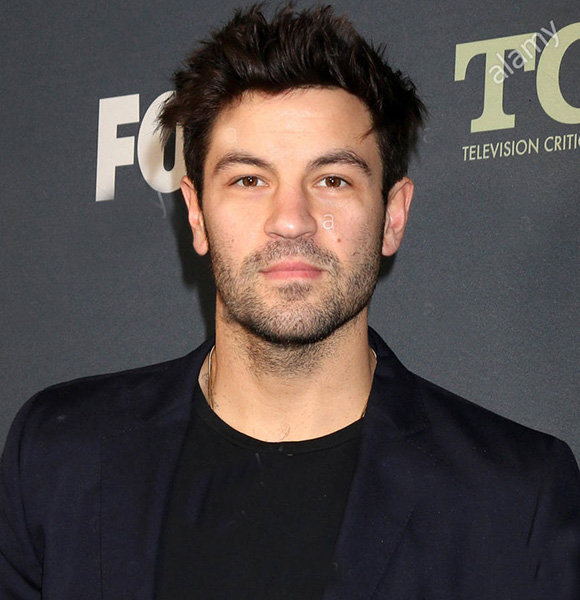 Jordan Masterson is well known for portraying the role of Ryan Vogelson in ABC’s comedy series Last Man Standing. Viewers may also recognize him from the hit comedy movie The 40-Year-Old Virgin.

Apart from the star's amazing career, the fandom is well curious about the actor's romantic life and wants an answer to an ongoing question, Is Jordan Gay?

Having a pretty low-key like there were rumors regarding the star's sexuality tagging him as a gay man, but is that correct? Let's Find Out:

As the actor has not come out with any statement regarding his sexuality, there are no resources that can verify if Jordan is gay.

And as there is no confirmation, we cannot assume the star's sexuality and tag him as a gay man.

Apart from the rumors and assumptions, let's get into the details about the star's previous dating history.

In 2006, he started dating actress and model Angie Simms after getting to know her at a private party. They dated for about four years before splitting in 2010.

A year later, the artist started going out with Dakota Johnson. They were introduced to each other by his sister, who happened to be a good friend of Dakota.

Unfortunately, rumors started that his girlfriend's emerging fame in the industry was starting to take a toll on their relationship.

It's not known if the rumors are true, but the duo did break up in 2014. Since then, Jordan has kept his dating a mystery.

Just like his present personal life details, Jordan's salary, and net worth also remain under the wraps and away from the media's limelight. Only it is known that his brother Christopher relishes a net worth of $10 million according to Celebrity Net Worth and his sister Alanna owns $2 million, reported by Celebrity Net Worth.

But, with acting credit in more than ten TV shows and movies, he probably relishes a handsome figure.

Jordan was born on 9th April 1986 in Florida, USA. His father, Joe Reaiche, is a former rugby player and descendant of Australia.

His mother, Carol Masterson, works as his manager and producer. The actor has tattooed his mother's name on his neck to honor her. Well, his mother had a significant influence on him to join the Church Of Scientology.

Interestingly, two of his siblings are already familiar names in Hollywood. His younger sister Alanna Masterson is an actress known for her roles in The Walking Dead. She made headlines by becoming the show's first gay character.

Besides working as an actor, Jordan is active in working for non-profit organizations for humanitarian causes. Notably, he is an extreme supporter of the organization Citizens Commission on Human Rights.

However, his stance on the organization is a bit controversial as it was established by the debatable cult called Church of Scientology in 1969. Moreover, he was also a member of the sect during his prime times. Likewise, Jordan's eldest brother Christopher Masterson is also an actor. Further, the 36-year-old artist also has two more brothers named Danny Masterson, who has a net worth of $8 Million according to Celebrity Net Worth, and Will Masterson, whose net worth is undisclosed.