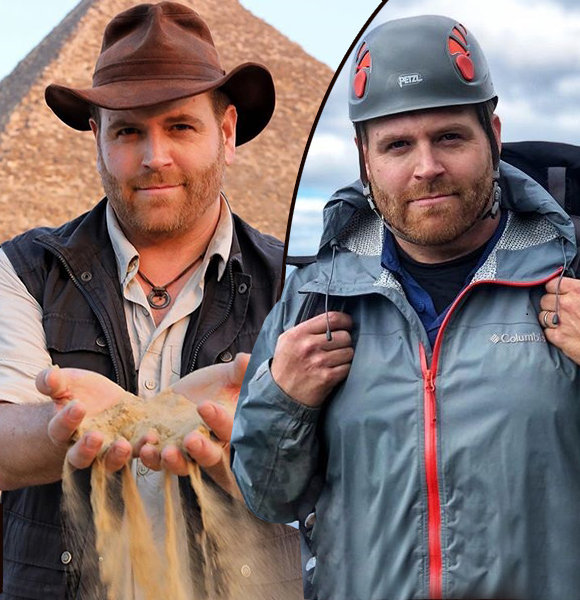 Apart from the star's successful career, the fandom is curious about his relationship with his wife.

He appeared as the host and the lead investigator in the series for 50 episodes from 2007 to 2012.

Josh is married to his wife, Hailie Gnatovich. The couple met while working on the series, Destination Truth. They were co-workers; Josh hosted the show at the time, and Hailie worked as a researcher. The couple started dating shortly after and got engaged on the set of the show Expedition Unknown. Josh announced their engagement through a Twitter post on the 12th of May, 2013.

More On Their Engagement:- Hallie Gnatovich Said Yes To Wedding With Josh Gates, & It's Not Mainstream

And four months after the engagement, they tied the knot on the 13th of September 2014 at the Hidden Pond Resort in Kennebunkport, Maine.

The husband and wife have two children: a son, Owen, born in February of 2016, and a daughter, Isla.

Josh made his TV debut with a small appearance in the TV show Beg, Borrow & Deal in 2002. Then in 2007, he got his first big break as the host of Destination Truth.

Apart from hosting TV shows, he has also produced them. He is the executive producer for 23 episodes of Expedition Unknown from 2015 to this date; he has worked as a producer in the show Destination Truth for 30 episodes in different years throughout the entirety of the show’s airing.

Also a character actor, Josh has gathered nine credits in the acting department, working on productions such as Party Foul (2003), Stranded (2013), and Legend Has It (2017).

Josh was born on the 10th of August 1977 in Manchester-By-The-Sea, Massachusetts, the United States.

His mom is British.

He is an avid SCUBA diver who started scuba-diving when he was ten.

His wife is a therapist. According to Hailie’s LinkedIn profile, she is a licensed marriage and family therapist and has worked as one since 2009.

Stay with us for more updates regarding the star's successful career and happily married life.