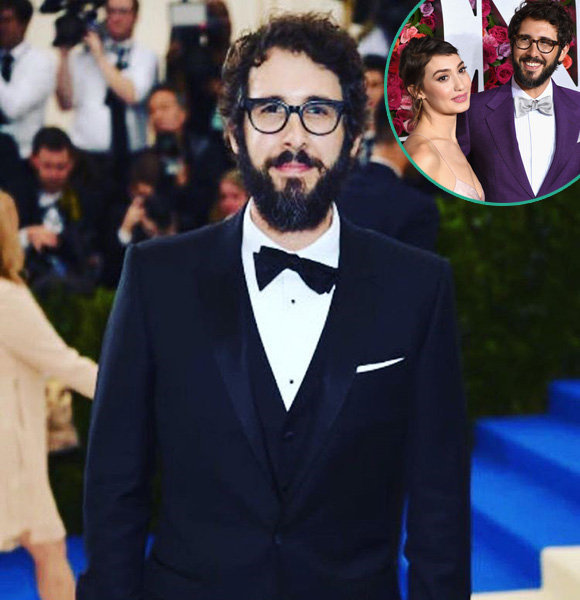 Started a career as a singer, but later transformed into a bonafide Broadway star!

That's how American singer-songwriter Josh Groban dived deeper into the theater world after hosting the 2018's Tony Awards along with Sara Bareilles. An occasional actor was also nominated for his work on Natasha, Pierre and the Great Comet of 1812, which has made his entrance to the broadway more easier and popular.

Aside from his popularity, he was speculated to be a gay star though he had a long dating history with the famous starlets of Hollywood.

Josh Groban has dated many famous popular faces of Hollywood. Dating is his main cards, but he took the gap from his ground after he was committed to the Broadway career, Natasha, Pierre and the Great Comet of 1812.

And it seems he has finished his commitment as he walked with the actress Schuyler Helford in his co-hosted 2018's Tony Award. The newly blossomed couple stunned the public when they attended the red carpet together at the 2018 Tony Awards held at Radio City Music Hall on 10 June 2018 in New York City. Well, though the couple didn’t mention the exact date of their relationship, it seemed they started dating in late 2018. Josh talked to Bustle on earlier in 2018 that he was single and in June 2018 he walked on the Award function with the beautiful brunette.

Entry of a stable girl in Josh’s life worked wonders for his professional life. With his girlfriend’s support, he achieved quite a lot in 2018.

Josh was cast as a lead in Netflix’s The Good Cop, a leap from his smaller roles in film like Crazy, Stupid Love-opposite Emma Stone and hit sitcom The Office.  Although the 10-part family-friendly comedy-drama got canceled after one season, it did boost up Josh’s confidence. He was genuinely surprised when he was offered a lead role in Netflix’s sitcom.

Furthermore, he released his eighth studio album titled Bridges on 21st September 2018 which peaked no 2 in Billboard charts. The album includes songs River and Granted, as well as covers including Bridge Over Troubled Water. It also features We Will Meet Once Again, a duet with Andrea Bocelli.

Lady luck sure favored Josh as he announced his first ever tour on Singapore including dates in Philippines and Poland.

You May Like:- They're Not Dating! Ryan Phillippe Smacks Down Dating Rumors with Alleged Girlfriend Katy Perry

In the past, he dated actress Kat Dennings for the two years before they amicably split up in 2016. As stated by E! News, It was a mutual breakup, and are still friends and care about each other. Also, they thought that it was not right for them to be in the relationship.

Also, his dating list includes the Buffy the Vampire Slayer's actress, Michelle Christine Trachtenberg in 2012, famous singer Katy Perry in 2009, American Wedding actress January Jones in 2003 to 2006, Two and a Half Men actress April Bowlby in 2009 to 2010.

The famous face facing the questions on their sexuality is heard and seen usually. Josh Groban is also one of the celebrities who got indulged on the gay controversy aside from his married tweets and long dating history.

When he was in a relationship with the actress Kat Dennings in 2015, Josh was engaged in the gay rumors. Despite the speculation, he made it clear that he is not gay. He said to Eonline in 2015:

"If I was gonna be gay, that would've been the moment. That was probably my greatest test, and I failed."

Also, in an interview with ETonline's Chris Azzopardi, he candidly faced the rumors on his sexuality.:

"Honestly, if I were gay, I would have had no problem saying it from day one. ... People have speculated, have wanted to speculate -- whatever, fine. I'm not gay, but if I were, I don't view it as a bad thing."

Well, though he cleared his gay rumors away, the 37-years-old actor does not appear to be rushing the altar now. But indeed shared his wedding plans and tweeted on May 2017 that, if he gets married he wants SNL themed wedding ceremony.

Notably, Josh has always been a true entertainer, so with his perfect wedding plans with his wife, Josh and his girlfriend Schuyler might have something up their sleeves for their future.