By LRU Writer | On: October 22, 2019
Kareem Abdul-Jabber invented his very own trademark way of putting the ball in the basket which he called the...married once in his life but his five children come from three different...he spent all the productive days of his life in basketball, the sport also loved the...Playing for the Unversity of California-Los Angeles, the Hall of Famer bagged the title of... 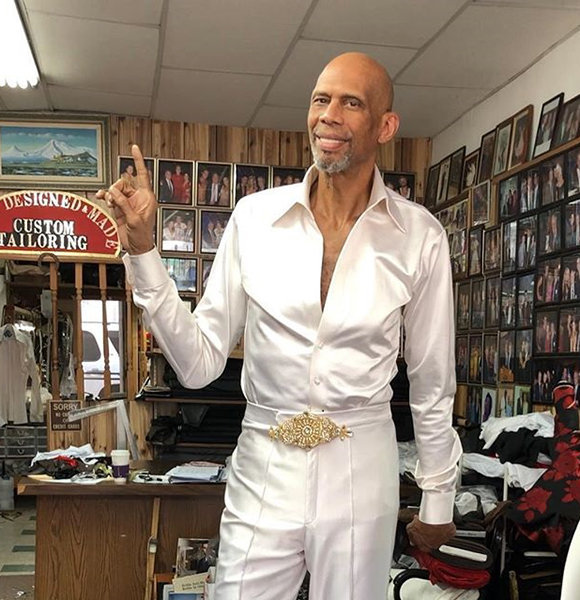 If you are an NBA fan, you cannot forget the name of Kareem Abdul-Jabber.

The man invented his very own trademark way of putting the ball in the basket which he called the Sky-Hook. Also, he became the player with most points scored, shots blocked, and most MVP awards before his retirement aged 42.

Now, he rests as a great ambassador of the sports and puts his effort and time in other productive things like film making, acting, and coaching.

Kareem Abdul-Jabbar might have stuck in the same team for many years in the NBA, but he was not doing the same when it came to personal bondings.

Soon after that, the NBA star fell in love with girlfriend Cheryl Pistono Jenkins in the 1980s. The relationship brought a son, Amir, into the world. Similarly, Kareem also has a son named Adam from a possible dating relationship.

Playing basketball for nearly two decades, Kareem Abdul-Jabbar is a true legend of the sports. While he spent all the productive days of his life in basketball, the game also loved the 72-year-old back.

During his playing days, his salary reached upto $3 million for the Los Angeles Lakers. Also, he was amongst the highest-paid player in the whole Lakers team.

Now, though he does not play competitive sports, Kareem actively lends his insights into the game as a coach. The 19-time All-Star also distributes his time outside of the court and into writing, acting, and film producing. Some of his notable works outside of playing are his books Giant Steps, Brother In Arms, and movies like Games of Death, Airplane and, Zero Hour. From the same, he has accumulated a net worth of $20 million.

Kareem Abdul-Jabber - height 7 feet 2 inches (2.18m) was a shining light ever since his childhood.

Born in New York City as the only son of his parents, Ferdinand Lewis Alcindor Sr and Cora, Kareem always captivated people with his stellar height. Taking advantage of the same, he stamped his authority in college basketball.

You May Like:- Jennifer Jason Leigh Husband, Family, Net Worth

Playing for the Unversity of California-Los Angeles, the Hall of Famer bagged the title of college’s best player leading his team to three national championships. Following the tremendous form, he was drafted in the NBA to play for Milwaukee Bucks.

Even playing in the big leagues, it did not take him much time to adjust. He continued his form and became the best player of his era.