By LRU Writer | On: July 01, 2019
Kash Doll had a rough start in...As successful artists, Kash boasts a net worth of ...As a budding rapper and Instagram star, she still provides for her family... 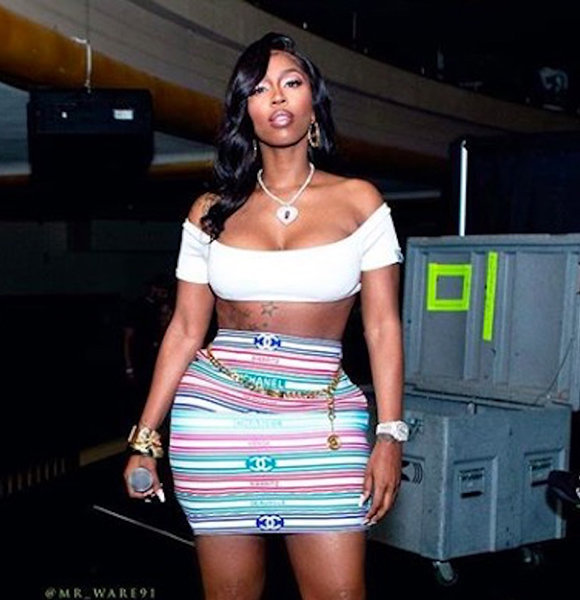 Kash Doll had a rough start in life. Her father passed away on her first birthday. So, growing up in a troubled neighborhood, the rapper learned to take care of herself from a young age.

But, working these jobs were not enough to support her five siblings and mother, who worked two jobs. Thus, she started working as a stripper. Kash used her stripping career as a steeping step into the rap industry and made a splash in the rap world via her mixtape, K.R.E.A.M Kash Rules Everything Around Me.

The budding rapper opened in concerts for Beyonce, Drake and Meek Miller.

Now, she tours on her own and is a busy artist all year round. Due to her burgeoning career, Kash boasts a net worth of $600K.

With a rising career in the rap industry, Kash has been linked to significant rappers, namely Drake and Meek Miller.

However, the Freestyle hitmaker was in a relationship with a guy named Shawn in 2018. In March 2018, she shared the sweetest message on Instagram for her boyfriend, sending him strength when his father died. In spite of all the sweet gestures, their relationship couldn’t last. It so happened that Shawn dumped the rapper for posting a picture with Drake. The image in question was Kash’s appreciation post for the Hot Line Bling singer for letting her open his concert, Summer Sixteen.

Since the dating debacle, Kash has kept mum about her love life.

Kash’s hardship while growing up shaped the person, she is today.

As the oldest of six siblings, the Accurate hitmaker used to take care of her brother and sister, while their mother was working. The rapper used to make sure they were fed and not into any trouble. In a way, she became a second mother to her siblings.

As a budding rapper and Instagram star, she still provides for her family. Well, Kash’s generosity doesn’t end at her family’s needs; she looks after her friends too.

On 1st 2017, the Kash’s best friend, Kendra put up a lengthy Instagram post thanking the rapper of African-American ethnicity for giving her a diamond necklace on the occasion of her birthday.

Kash, birth name Arkeisha Knight, was born in 1992. She is a Pisces by virtue of her birthday on 14th March.

The Detroit native used to be a cheerleader at middle school. At high school, she used to be part of a dance group called Fresh Girls. She went to two highs schools as she ran into trouble at Henry Ford school. Subsequently, she went to Detroit City High after being expelled from the former.