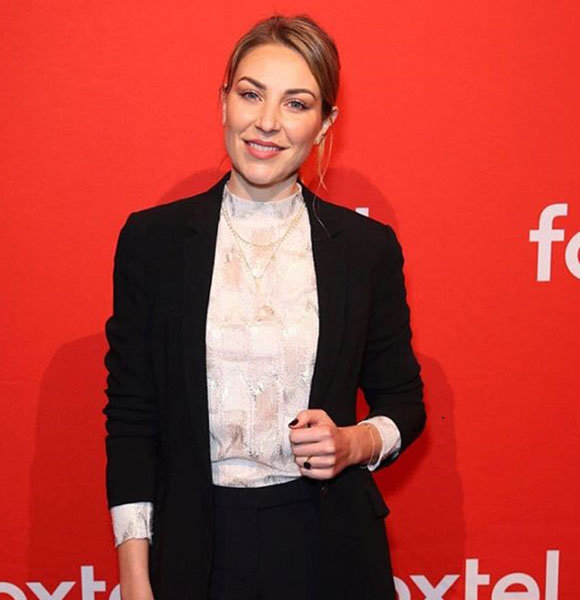 Kate Jenkinson is an actress best known for playing Allie Novak in Wentworth (2016-2021). Adding on to her amazing career the fandom is well curious about the star's romantic life with her loving boyfriend.

Before the acclaimed role, she rose to fame for portraying Kendall Quinn, a lawyer in the comedy series Super Fun Night (2013-2014) alongside Rebel Wilson.

Who is Kate Jenkinson's Boyfriend?

The Wentworth actress Jenkinson is dating her boyfriend Nathan Harding, an entrepreneur, marketer, and the founder & managing director of Yo Media. The boyfriend and girlfriend started dating around 2018.

Kate Ellen Jenkinson was born on 24 August 1981 in Perth, Australia. She graduated from the West Australian Academy of Performing Arts (WAAPA) in 2004.

The Super Fun Night actress' very first acting job was in a play called Zastrozzi for Perth's Black Swan Theatre company. She was cast as Julia in the play two weeks before her graduation from WAAPA. In 2005, she got nominated for Best Newcomer for her performance.

Kate was flown from her native place Australia 4 times within 14 months to test for various projects in Hollywood, with finally landing Super Fun Night (2013) in 2013.

The actress plays a gay drug-addicted prostitute named Allie Novak in the prison drama series, Wentworth. Her character was introduced in the fourth season (2016) of the series.

Her character is caught up in a tricky situation when she falls for the adversary of her protector, Bea Smith (played by Danielle Cormack).

Adding to her list of relations the star is very good friends with her co-stars from Wentworth (2013) Tammy Macintosh and Danielle Cormack.

On graduation from WAAPA, she was awarded the Nigel Rideout award for excellence.

Adding on the star is close friends with Rebel Wilson.

With a loving partner, the actress has also welcomed a rescue dog named Bowie to her family.

Talking about her family the actress also has an older brother named Andrew and two half-siblings.

Kate's boyfriend, Nathan, has documented his day to day entrepreneurial journey and posted it on his website, nathanharding.com.

Stay with us for more updates regarding the star's rising and amazing career along with her happily blessed romantic life together with her partner and dog.