By LRU Writer | On: August 22, 2019
Kathrine Narducci’s start in the showbiz is fascinating. She was accompanying her nine-year-old son...The actress was married to husband...Growing up in East Harlem, New York City, the 53-year-old saw mob-related activities first hand as... 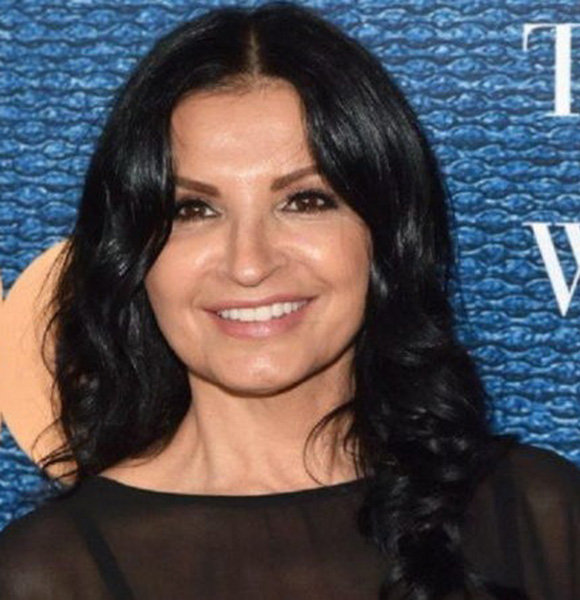 Kathrine Narducci’s start in the showbiz is fascinating. She was accompanying her nine-year-old child to an audition when the casting director spotted her. Instantly, Katherine's life changed as she got cast as Robert De Niro’s wife in the movie, A Bronx Tale.

Since then, the actress has been part of projects namely Power, NYPD Blue, Third Watch, Two Family House, and The Sopranos.

The actress was previously together with her now-deceased partner, Richard Arthur Ligotino. The pair's union brought two children; son Nick Ligotino and daughter Sally Prisco into the world.

Sadly, Kathrine and her children were left alone when Richard passed away in 2002. Since the devastating loss of her husband, the actress hasn't opened about her dating life.

Sopranos Actress:- Edie Falco Feels Getting Married And Having A Husband Is Not Important! Does That Make Her Gay?

In the absence of news on her personal life, fans can enjoy her reel romance on movies and TV shows.

Interestingly, Kathrine is connected by fate with actor Michael Rispoli. The co-stars have unknowingly been cast as a couple in Two Family House, Law and Order, and Third Watch.

In Two Family House, Kathrine and Michael played the role of an unhappily married husband-wife duo. The co-actors' realistic acting even gave rise to dating rumors, which were later disproved.

The actress was born on 22 November 1965 to parents; father Nicky Narducci and loving mother. Kathrine boasts Italian heritage from her guardians.

Growing up in East Harlem, New York City, the 53-year-old saw mob-related activities first hand as her father was associated with the Mafia.

Sadly, he passed away in a mob-related brawl when the actress was just age ten. Coping up with the loss, Kathrine and her family including her sisters Rhonda Narducci and Carol Narducci managed to survive on their own.

Katherine has been a busy actress ever since her acting debut in 1993. Till date, she has 48 acting credits. Her memorable roles include Charmaine Bucco in The Sopranos and Lorraine Lionello in Chicago Overcoat.

As a working actress, she earns an average salary of $49,924 per year. With her various creative endeavors, there is no doubt that Katherine boasts a decent net worth.

As of 2019, she is set to portray the character of Olympia Gigante in the TV series, Godfather of Harlem. Also, her projects, namely Fonzo, Two Ways to Go West, and Bad Education, are in post-production in 2019.

Along with a reputed resume, Katherine boasts a striking figure. The veteran actress stands at the height of 5 feet 6 inches (1.66 m) with a complementing weight of 64 kgs.

In terms of her measurements, her bust size is 35 inches, waist 25 inches, and hip size is 37 inches. Talking about her appearances, Katherine boasts black hair color complimented by dark brown eyes.