By LRU Writer | On: July 12, 2019
Kathy Baker is an American actress mostly known for portraying the character.....she married after a long interval in....still acting in several TV shows with a net worth of... 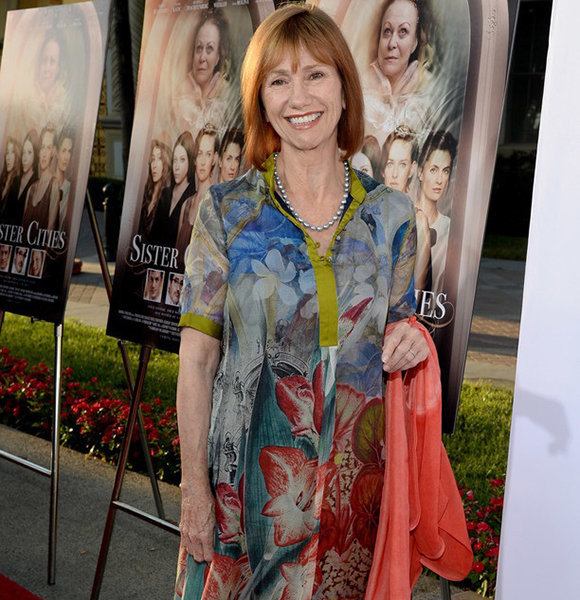 Her career hasn't been confined to a single character as she has starred in several other hit movies like Edward Scissorhands, Street Smart, Saving Mr. Banks, and I Blew Up The Kids.

And, she is well-rewarded for her contributions; with awards like the Golden Globes in 1994 and three Primetime Emmy.

Kathy (full name: Katherine Whitton Baker) was born on 8th June 1950 in the town Midland in Texas, USA. She was raised by her parents: John Seawand Baker and Helene Andree.

Her father worked as a geologist and educator and geologist at Princeton University. Kathy's mother was from France, which inspired the actress to study French art and culture.

Interestingly, her aunt (father’s cousin) Diana Muldaur is a famous actress, known for her performance in the Star Trek franchise.

After Kathy finished high school in New Mexico, she moved to California for her college education. The artist enrolled at the University of California and received her Bachelor of Arts degree in French in 1977.

Soon, she moved to France and studied French culinary. Although she had plans to become a chef, she discovered that her real passion was in acting, so she joined San Francisco's Magic Theatre.

Eventually, she started performing in notable plays which became a foundation for her career in showbiz. In terms of height, she is five feet and 6 inches (1.68 meters) tall.

Kathy's acting career has helped her in building a fan base along with earning a substantial fortune.

At the age of 69, she is still acting in several TV shows and also enjoys a net worth of $2 million. Kathy Baker attends the Look What She Did! Benefit Brunch at Jar on 31st March 2019 (Photo: gettyimages.com)

She possesses a 1,972 sq ft home in California that she bought in 1996 for $450 thousand. The house, which is worth much more now than its original price, shows a glimpse of her luxurious lifestyle.

Kathy - age 69 - has been married twice until now. Her first husband was Donald Camilleri, whom she met during the beginning days of her career.

The pair's union bore a son named Julian Joseph Camilleri on 27 November 1974. Nearly a decade after childbirth in 1984, Kathy and her then-partner tied the nuptials in a private wedding ceremony.

The marriage turned out to be a blessing for the two as they welcomed their second kid, a daughter named Marieclaire Camilleri.

With the arrival of her children and the added responsibility of motherhood, Kathy took a break from theatre acting.

Similar Married Life:- After Divorcing Her Actor Husband Is Autumn Reeser Back At Dating Or Just Too Busy Because Of Motherhood?

Instead, she focused on performing in movies and TV shows as it had more economic prospects.

Unfortunately, due to undisclosed reasons, she filed for divorce from her husband Julian, and they separated officially in 1999. Interestingly, in one of her interviews before the divorce, the actress had revealed that she wished to have more children, but she couldn’t.

Since she was still married back then, it’s probable that their differences arose after the couple's disagreement on sharing more children.

In 2003, the actress married director Steven Robman, a director by profession. The couple was first introduced with working together on an episode of Boston Public.

As of now, the artist is in a happily married and sharing a household with her second husband.