By LRU Writer | On: March 23, 2018
Katie Lee Engaged To Producer Boyfriend; Husband-To-Be Spoils With Huge Ring Only a few are fortunate enough to grab the second chances presented to them! Katie Lee, American Chef, is all set to give marriage another chance. Previously married food critic is now engaged with her man of dreams. Take a look at her romantic life which is enhanced by the presence of an elegant diamond ring engagement ring. 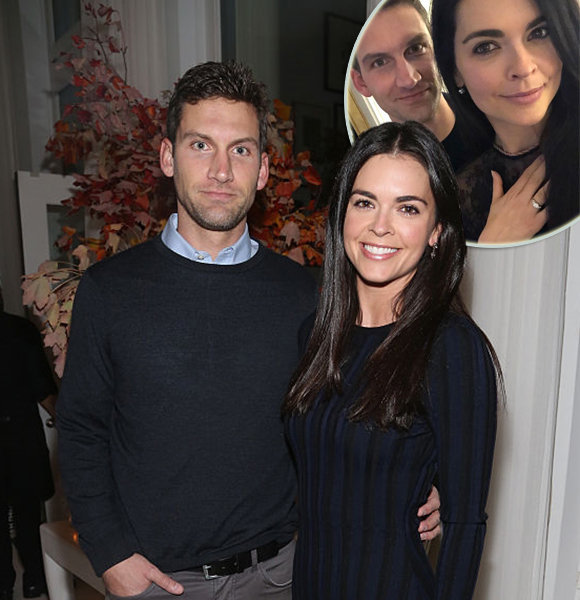 Only a few are fortunate enough to grab the second chances presented to them!

Katie Lee, American Chef, is all set to give marriage another chance. Previously married food critic is now engaged with her man of dreams. Take a look at her romantic life which is enhanced by the presence of an elegant diamond ring engagement ring.

Katie Lee, a television personality is yet again set to walk down the aisle with her newly engaged man. Katie is engaged to a television producer Ryan Biegel, her to-be husband. The news of their engagement was announced through a social media on Thursday in 22 of March.

Katie revealed her engagement on her Instagram while posting a picture of her with Ryan. In the photo, she is showing off her elegant diamond ring while posing up for a picture with her fiancee.

On the post, she captioned the picture with her answer to the proposal by Ryan. Furthermore, their engagement occurred during their picture perfect holiday to Paris, France, which Katie and Ryan have been happily documenting over social media.

Moreover, the duo had their memorable moment at the La Réserve Paris Hotel and Spa. They also enjoyed dinner at Chez Georges earlier in the same week.

However, the duo has not yet revealed the tenure of their relationship. They have not shared how the twosome met and fell in love with each other. The stories of their love life is still a mystery.

Nevertheless, Ryan has shared a picture while cozying up with Katie back in November 2016.

Talking about Katie, she first shared the picture of her boyfriend turned fiancee on Instagram account at around May of last year. She posted an image in which Ryan was holding her pup, Gus. She captioned the picture as,

“Gus made a new friend,”

Since then, both Katie and Ryan have been sharing some glimpses of their dating life with their followers on the social media. Moreover, it turns out the duo previously worked together. Katie and Ryan were sharing a set together. In Katie's 2016 Tv show, Bites With Katie Lee, Rayn was serving as an associate producer.

However, this newly engaged couple has not talked anything about their wedding yet. The couple surely is looking forward to a perfect wedding including parents, friends and close ones.

Well, for Katie this is not the first time that she would plan a wedding or choose a wedding dress. Kaite, who enjoys a net worth of $10 million, was married to Billy Joel, an American singer, songwriter, and pianist, whom she met at the Peninsula Hotel bar. She tied the nuptial knot with Billy in 2004.

However, their marriage could not last long. After six years of living together, the couple divorced in 2010 while they remained caring friends and had mutual respect for each other.

It seems that moving on from her failed marriage Katie is all set to take the wedding vows with her newly engaged fiancee again!