By LRU Writer | On: June 05, 2019
Kristopher is a YouTuber, comedian, and a social media personality...Kristopher London was born in London, England...He is in a relationship with a youtuber...He met his girlfriend on twitter... 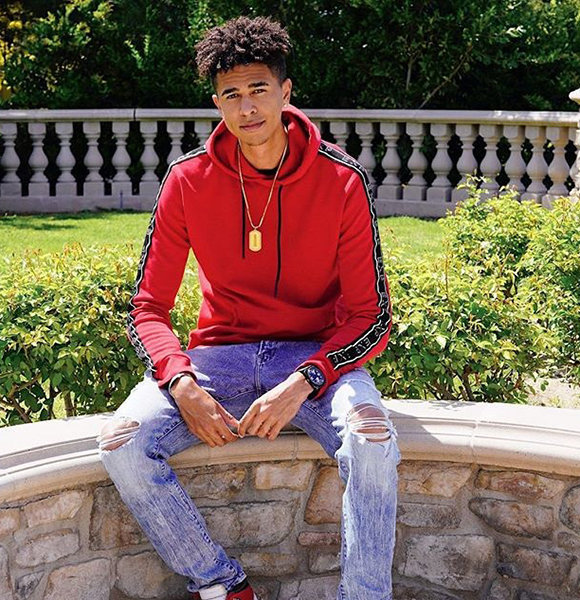 Failing to make it in the NBA, Kristopher London took a different route to stardom. He chose to become an online entertainer. And, for good, it worked out for him in the long run.

Now, Kristopher dons a hat of a YouTuber, comedian, and a social media personality. Know all about him, including details on his personal life, measurements, and more!

Kristopher London was born in London, England, in the year 1993.

The star celebrates his birthday on 3rd of April. Having American, British, and Nigerian heritage from his parents, Kristopher flaunts a mixed ethnicity. He stands with an unbelievable height of 6 feet 10 inches (2.08 m) and a weight of 80 Kgs.

Celeb From London:- Wendy Hurrel: Married to her Secret Husband? Or Boyfriend and Dating?

There are no information available of his parents in public at the moment. It is only known that he has a sister named Olivia for siblings.

As someone who spends time on the internet, it wasn't a surprise when Kristopher revealed that he met his girlfriend online via Twitter.

Since early 2016, the star was talking to the YouTuber, Bri Martinez. Their daily conversation sparked a feeling in them, and the duo fell in love. However, they only met in person at the end of the year. Marking their second anniversary, Kristopher took to his social media, specifically Instagram on 5th of December 2018. He shared a picture with Bri, and through the caption, he shared that she brings butterflies in his stomach.

If social media is any hint, they are having a pretty good time in each other's company. Moreover, they have been living together in L.A., California; ever since Bri moved to L.A. after graduating from her college in Portland.

Kristopher’s professional life is as exciting as his personal. Before becoming a YouTuber, he was a professional basketball player at the college level. But, he had to leave the sport because of medical issues.

However, his life took a turn on the 9th of August 2012. He created a YouTube channel titled “JustSayItMmokay” at the age of 19.

His channel is focused around basketball, but he does upload videos on other subjects like his personal life and comedic skits. Within seven years, his channel amassed almost 2 million subscribers.

With his massive followings, Kristopher has undoubtedly reached a high level of stardom. Working an unconventional job, a Youtube, he doesn't have a salary, but he does earn up to $200K just from his ad revenue.