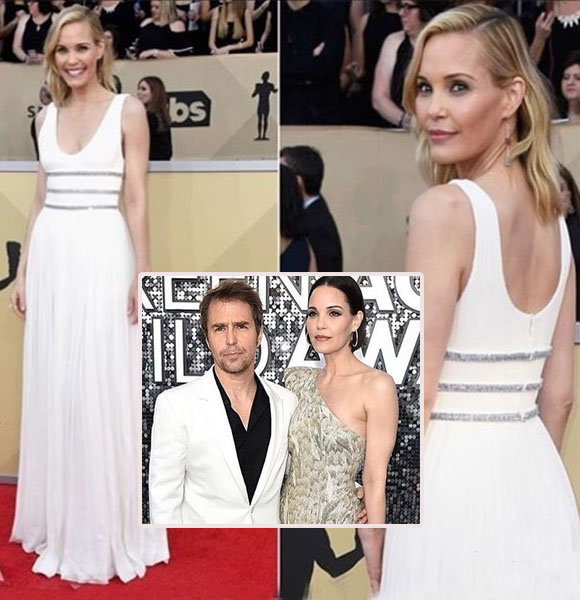 Leslie Bibb is a model turned actress who began her career after winning a nationwide modeling contest run by The Oprah Winfrey Show and Elite Agency. She was just 16 at the time. Throughout her modeling career, she has appeared in magazines such as Maxin, FHM, CosmoGirl, 944, and Seventeen.

The Babysitter actress was born on 17 November 1974 in Bismarck, North Dakota, as Leslie Louise Bibb. After Leslie's father died when she was three, her family moved to Nelson County, Virginia. There, she was raised alongside her three sisters by her mother, Betty Blakemore Sulzbach. Leslie is the youngest of her siblings, and her elder sisters are Bev Bibb, Kim Bibb, and Trish Bibb.

She attended the Saint Gertrude High School in Richmond, Virginia. Leslie joined the University of Virginia but dropped out to focus on her career. Afterward, she studied at William Esper Acting Studio for three years.

The Iron Man actress has been dating actor Sam Rockwell since 2007. The two first met at Chateau Marmont Hotel in Los Angeles, California. She was waiting in the lobby to have dinner with her friends when Sam walked in. He was working on the movie Frost/Nixon (2008) at the time.

The couple even played together in Iron Man 2 (2010), where Leslie played Christine Everhart while her boyfriend played Justin Hammer.

Sam Rockwell is an actor best known for The Green Mile (1999), Three Billboards Outside Ebbing, Missouri (2017), and Fosse/Verdon (2019). Sam made his acting debut when he was just ten. So far, he has his name credited in over 100 works.

He has won dozens of accolades and bagged the award for Outstanding Performance by a Male Actor in a Miniseries or Television Film for his performance on Fosse/Verdon during the SAG Awards on 19 January 2020.

According to celebritynetworth.com, Leslie Bibb is worth $4 million while her partner has a net worth of $30 million.