By LRU Writer | On: July 02, 2019
Louise Thompson is a British model and... has impressive physical attributes like a light...Her family consists of a younger brother... was seen with Spencer Matthews immediately after...are now engaged to each other... 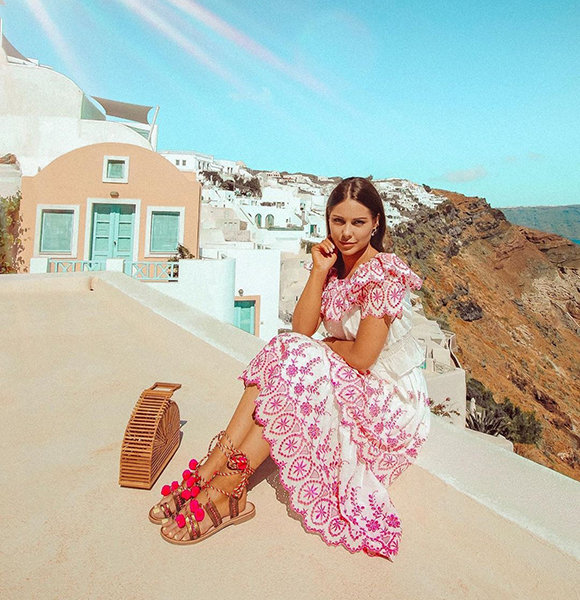 Louise Thompson is a British model and reality TV personality. Supporting her profession, she has impressive physical attributes like light brown eyes and dark brown hair.

Though her height is just 5 feet(1.52m), her stunning cheekbones, and maintained body figure compensates her gorgeous look. She has a body weight of 49 kg at the age of 29, while her measurements are 32-24-33 with the feet size of 38 (EU).

Louise was born on 26 March 1990, in South Kensington, London, England. Her family consists of a younger brother Sam and her mother Karen Thompson.

She is not so close to her father as her parents are separated. And, it was her mother, who raised her and her sibling on her own. Her father now lives with his girlfriend.

Louise is much recognized for her work on the reality show Made in Chelsea. The show tracks the dazzling life of the cast members. After her appearance on the show, Louise has been in the limelight for a while. Along with her fame comes a list of boyfriend's she has been with over the years.

One of Louise's boyfriends includes Jamie Laing, who she dated in 2012. They were in a relationship for a few months, but, they failed to establish a concrete foundation and broke up eventually.

Louise was seen with Spencer Matthews immediately after her split with Jamie. Spencer was Jamie's close friend, so tales began that she cheated on Jamie. However, they were not seen together after a month.

In the year 2013, Louise was spotted with reality star and Irish soccer player, Andy Jordan. But, their relationship did not last long; Louise was reportedly cheating on her boyfriend with One Direction's member.

After her brother Sam confirmed the affair, the relationship only went south.

Afterward, she dated Alik Alfus for two years. In the middle of 2015, they were ready to get engaged. Surprisingly Louise dumped Alik in 2016. She was again charged with the crime of infidelity; Alik accused her of cheating with Ryan William Libbey.

After her string of relationship, it seems Louise has finally found the man of her dreams. She and Ryan William Libbey, have been together since 2016. The couple are now engaged to each other.

Ryan proposed Louise, on his birthday, 4 August 2018. He was fully prepared with a beautiful white, gold, and cushioned cut diamond engagement ring. Although they planned to have a religious wedding in 2019's Christmas, it got postponed. Louise delayed her wedding to fiance Ryan stating that she doesn't want to rush into things until she feels like she is ready for all the preparation required.

Louise is one of the most successful stars among the members of Made in Chelsea. In March 2019, her brother Sam left the show. After a few months, news about Louise also leaving the show came into the hype. But, Louise confirmed that the story was fake. She still works on the show.

Although it's not known how much salary she earns from Made in Chelsea and other shows, Lousie's estimated net-worth is £1.2 million.