By LRU Writer | On: July 21, 2019
Marc Murphy is the owner of the iconic... appearing as a judge on the popular...chef never attended any conventional colleges... married his longtime girlfriend, Pamela... 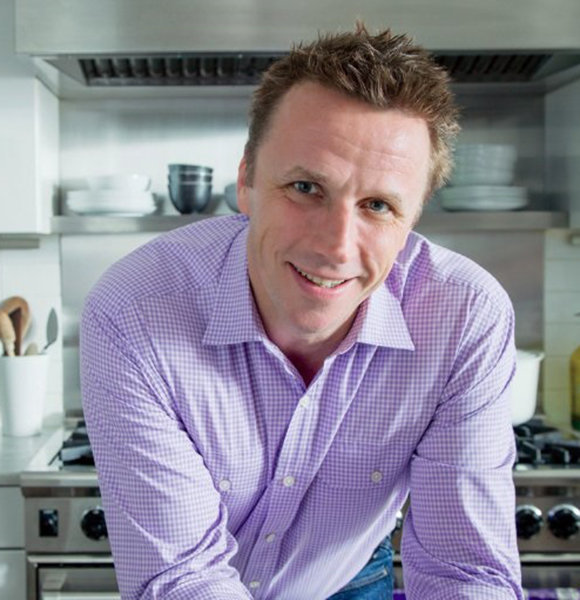 However, he is mostly known for appearing as a judge on the popular cooking reality TV show, Chopped from 2009 to 2014. He has also made guest appearances in Toy Soldier (2015), Best Ever (2015), The Today Show, Rachael Ray Show, The Martha Stewart Show, and more.

Marc was born on the 6th of February 1969 in the city of Milan, Italy. While his ethnicity is a mix of Italian and European heritage, only a few details of his background like his parents and siblings are known. For instance, it is known that his parents live in Monte Carlo.

As for his education, Marc attended Fryeburg Academy in 1988 and later on enrolled in The Institute of Culinary Education to pursue his passion in Cookery. The chef never attended any conventional colleges.

Similar to his professional life, Marc has also had the same level of success in his personal life. He has been in a relationship with the same woman for almost two decades now.

The celebrity chef married his longtime girlfriend, Pamela Schein in 2002. Since being married, the couple has been blessed with two children; a daughter, Campbell ( born in 2003 ) and a son, Callen (born in 2006). Marc and his wife live a blissful life with their children in a stunning apartment, located in the Upper West Side of New York City.

Mark started as an apprentice at restaurants located in France and Italy before returning to New York. In New York, he was offered a job as a line cook at Terrance Brennan's Prix Fixe. For two years, he got engaged at the Prix Fixe and gained experience.

Then, he moved to Paris where he worked at Le Miraville for one and a half years. Once back in America, Marc served as Executive Chef at Cellar in the Sky at Windows on the World at the World Trade Center, La Fourchette, and Chinoiserie.

From once owing one restaurant in Tampa and five in Manhattan, Marc's net worth is estimated at $6 million. His wife worked with him in managing restaurants and running his lifestyle blog, The Select 7. Marc closed down last of his restaurants - after 12 years of service - in July of 2019.

Apart from working in the kitchen, Marc also wrote a cookbook titled Season with Authority: Confident Home Cooking. With a rating of 3.9 out of 5, the book is available on Amazon for $21.