By LRU Writer | On: August 11, 2019
Marianne Williamson is a world-renowned author/writer who has contributed in the field of book writing and film making with outstanding works like...has taken the standards of storytelling and writing to the next level with...completed her education from California’s Pomona College in...is one of the top-earning book authors and hopeful presidential candidates for... 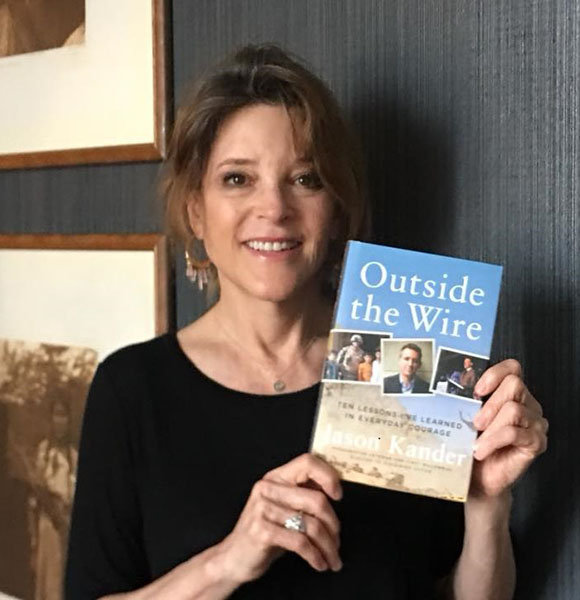 Marianne Williamson is a world-renowned writer - who has contributed much to the field of book writing and film making - with outstanding works like Bigfoot, XeNation?: MPO, and American Visionary: The Story of Barbara Marx Hubbard.

The best-selling A Course in Miracles author has taken the standards of storytelling and writing to the next level with her highly creative thought process and understanding of the readers' mindset.

Let's go ahead and know more about her family background, husband and net worth

The quick-witted presidential representative, Marianne Williamson, had her fair share of fun when the topic came to marriage and choosing a life partner.

She officiated the wedding of Elizabeth Taylor and Larry Fortensky, but when talks of her marriage arose, the writer said she married once and referred it as a fifteen minutes mistake.

Marianne didn't reveal the identity of her ex-husband and has kept it a secret to this day.

However, the co-founder of the Peace Alliance is a single mother to a daughter named India, who ages 28 as of 2019.

Marianne Williamson was born on 8 July 1952 in Houston, Texas. She came from a Jewish family background as both her parents Sophie Ann and Samuel Williamson possessed a Jewish accent.

Growing up, she attended Congregation Beth Yeshurum and completed her education from California’s Pomona College in theater and philosophy. In mid-1980’s she preached in Los Angeles and officiated weddings. In 1992, the Houston native transformed her spiritual beliefs into writings and published her first book titled A Return to Love. The book was a massive success and even spent 39 weeks on the New York Times' best-seller list.

Then onwards, Marianne published other best-selling books like Emma and Mommy Talk to God, The Age of Miracles: Embracing the New MidLife and Enchanted Love: The Mystical Power of Intimate Relationships. The success of her books saw the writer as one of the greatest authors of all time.

As of now, the 67-year-old is helping the needy with foods and funds through her organizations: Peace Alliance and Project Angel Food.

Marianne Williamson is one of the top-earning book authors and hopeful presidential candidates for the 2020 campaign trails.

While her narrative talents were matched by none, she bagged more than $950K from books advance sales and self-produced events in 2014. Marianne has published thirteen books amongst which four ended up being New York Times bestsellers.

More On The Presidental Race:- Andrew Yang Net Worth In 2019, Policies, Education

As of 2019, her assets like royalties from books, LLC business income, speaking fees, affiliate commissions, and stocks have made her a wealthy woman. Marianne's net worth ranges somewhere between $700K and $2.1 million.