By LRU Writer | On: May 08, 2017
You remember the famous sports debate while watching ESPN channel. He is someone who perhaps gives more importance to his job than his wife. You wouldn't believe us, but you will surely understand this smart man's words. In fact, his wife is also in the media business, and this may be one of the reasons their relationship has stood rock-strong for years.Being a sports analyst he sometimes came to controversy due to his step forward nature. Now, You may get the clue who the person is! 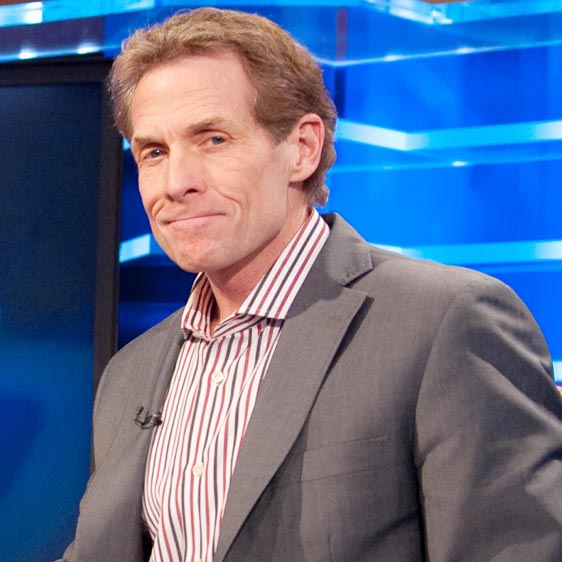 You remember the famous sports debate while watching ESPN channel. He is someone who perhaps gives more importance to his job than his wife. You wouldn't believe us, but you will surely understand this smart man's words. In fact, his wife is also in the media business, and this may be one of the reasons their relationship has stood rock-strong for years.Being a sports analyst, he sometimes came to controversy due to his step forward nature. Now, You may get the clue who the person is!

Yes! Skip Bayless, a well known for sports columnist & reporter at ESPN2. He was the person who lifted the First Take of ESPN2 on the top rank in the US in viewership. Talking about who is he committed? There are some interesting facts that you need to know.

He met while his wife, Ernestine Sclafani, who is known for famous publicist while working on the sports program called ‘Cold Pizza’ about ten years ago. Worked as a co-host with Stephen A. Smith on ‘First take’ ESPN2, Skip was always interested in sports activities.

At the first date, he told her that.

‘You will never be more important than my job.’

Well, Sclafani adored him like most of the girls do. She said.

That was so perfect, isn’t it?

Keeping the affair private for years and years, they got married, which was so personal that there were not any pictures of their wedding over the internet. Despite, they kept their marital status private for many years. The famous publicist, Ernestine was not his first wife. Once he married his high school girlfriend, and he accepted the fact that those decisions were a ‘Big mistake.' He didn’t want to reveal about their divorce.

Bayless is preoccupied with his job and healthy living. Graduated from Vanderbilt University and included on Fred Russell-Grant land Rice Sports writing scholarship, Skip was always interested in sports activities. Along, he is the man of strict daily diet routine, made himself ‘an odd’ member in the family.

Though we haven't found any information; where they settled or what they were doing! Maybe! They want privacy.

In April 2016, ESPN has published their statement regarding Bayless’s contract.

"Skip Bayless has decided to leave ESPN when his contract expires at the end of August. His final appearance on First Take will be the day after the NBA Finals conclude. We want to thank Skip for his many contributions to ESPN. His hard work and talent have benefited ESPN for 12 years." - espnmediazone.com

You can see the last video on ESPN first take that skip hosted. He said that that was his last day at ESPN studio nearly after 12 years on the show. He had gone the crazy woody page in New York City on cold pizza with Steven S Smith.

Richard Twitted about the offerings:

Damn! Man…Go and Get your offer skip.

Sports Illustrated’s Richard Deitsch has also tweeted about the offering of newly contract for Bayless.

Though Bayless was the one who lifted the ESPN’s ‘First Take’ as one of the tops showed program in the United States due to his incredible contribution.

According to the Richard, ESPN was about to renew his previous contract. The reason for leaving ESPN after the contract was over was unknown.  There was the rumor that he might have headed for Fox Sports. Usually, ESPN personalities don’t react to Bayless’ troll; they just leave it on the internet for the pile.

Even former ESPN friend Rich Eisen was not sad about skip’s leaving:

His steady behavior created the reality that he was always right. Once, BarkelyBasketball ‘Hall of Fame’ CBarkley told Washington post that

“If I could get Skip Bayless in a room, you’d need DNA to find out who it was.” Seattle Seahawks cornerback Richard Sherman, during an appearance on “First Take,” called him an “ignorant, pompous, egotistical cretin.” - Washington Post 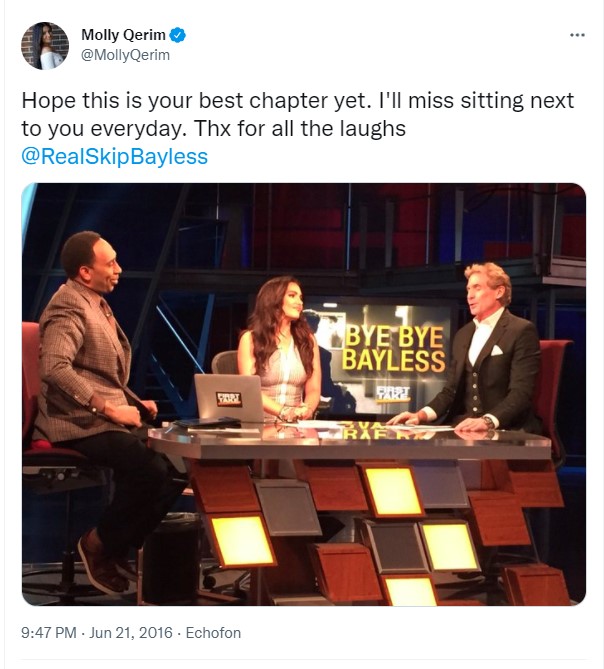 Sexy journalist, Molly Qerim, who promoted as the permanent host of ‘First Take’ in 2015, twitted about Skip’s departure.

Skip Bayless is done with his “First Take” tenure and bid farewell from ESPN altogether in 2016, but Fox Sports 1’s newest host recently revealed to TheWrap that his famous show nearly came to an end long before his departure in June.

“I loved my 12 years at ESPN,” Bayless said during a rare interview.

“And I loved working with Stephen A. [Smith] — and trust me, it’s hard to even talk about it because I miss him.”

“But the truth was, I never quite fit on a Disney-owned network. And it’s not that I was ever a shock jock — I just like to go a little deeper in my arguments than [ESPN] was comfortable with,” he revealed.

“I like to take on athletes who have issues with me.”

Quarterback Tony Romo is expected to be released by the Dallas Cowboys on March 9, 2017, bringing an end to the ongoing controversy in Dallas.  On March 9th episode of Undisputed, Shannon Sharpe and veteran journalist who works in First Take with Stephen A. Smith, Skip Bayless reacted to the news.

Moreover, Bayless explained why Jerry Jones' decision to part ways with Tony Romo just sealed a Super Bowl win for the Cowboys ahead of the season. He said:

“Guess what just happened? Jerry Jones just won his first Super Bowl in the last 22 years. I am ready to make an early Super Bowl prediction: My Dallas Cowboys just beat Tom Brady and the Patriots in Super Bowl 52 in Minneapolis. I’m going to go on record already, I know it’s early, but I am going on record.

So, there we have it, people. Ahead of the whole season, the super bowl season has already been decided!

He is known for sports columnist who made the "First take,” ESPN2’s one of the top rated programs. He is also an author; he published his book ‘God’s Coach: The Hymns, Hype, and Hypocrisy of Tom Landry's Cowboys.

The passion towards the sports was incredible. He broke down into his tears on his show “First Take” when the Dallas Cowboys were out of the game during knockout. Well, hard work pays off, Skip as a TV personality has earned the net worth of $4 million dollars, and salary was about $500 thousand dollars.

A day contract with ESPN!

Well, it has happened! Saying that he could not imagine going out in disgrace anywhere else, Skip Bayless reportedly signed a one-day contract with ESPN to be fired by ESPN a day after. Bayless said:

“ESPN is where I got my big break, and I’ve always considered it to be my true home, so I want to thank the network for letting me end my career here with this termination,”

Bayless sat next to ESPN president John Skipper while signing a day contract to go on a five-minute tirade slamming star LeBron James as immature and wildly and also speculated that various NFL players were using performance-enhancing medical drugs before being summarily fired a day later. He added:

“I went on some of my best rants here, and it’s truly a privilege to have one last opportunity to make an indefensible statement and offer a half-hearted apology. I always pictured myself getting fired behind an ESPN desk.”

On the other hand, Skipper praised Bayless after the termination, saying that his baseless arguments, high-pitched screaming as well as arrogant attitude had helped define ESPN for the last decade.