By LRU Writer | On: March 17, 2017
They have been named one of the coolest couples in the world by Vogue magazine. Yes, I’m talking about beautiful Samantha Ponder and Vikings quarterback Christian Ponder. In case you have no idea who Samantha Ponder is. Samantha is a gorgeous host and reporter for ESPN’s College GameDay and married NFL star just months after meeting him. Well, we can only say: Love is unconditional. 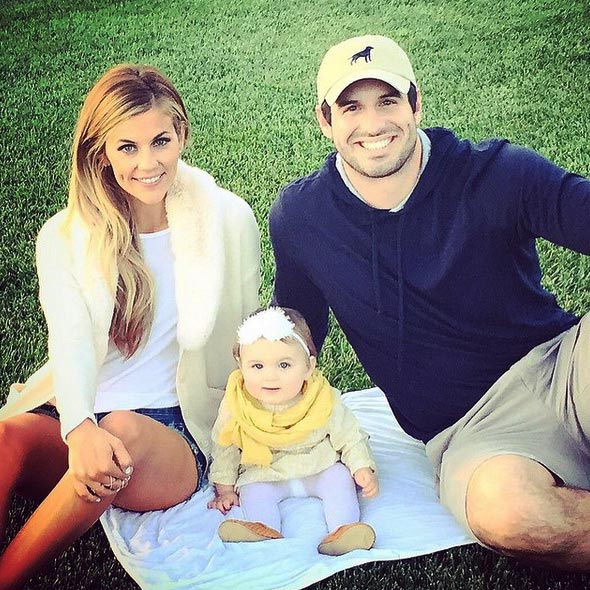 Samantha Ponder secretly tied a knot and exchanged vows in 2012. This created a hype around the media, and it was no secret few days later. And they thought they could hide it. What irony? More about Samantha and Viking’s quarterback whom she married, their relationship to follow:

Caption: A report on one of the most Adorable the Couple in Professional Sports, Samantha and Christian Ponder.

They have been named one of the coolest couples in the world by Vogue magazine. Yes, I’m talking about beautiful Samantha Ponder and Vikings quarterback Christian Ponder. In case you have no idea who Samantha Ponder is. Samantha is a gorgeous host and reporter for ESPN’s College GameDay and married NFL star just months after meeting him. Well, we can only say: Love is unconditional.

It has been no secret that couple married secretly on December 17, 2012, in Hudson, United States of America. The couple did have a second ceremony and a reception for their family and friends although. Still, a question pops why did they marry secretly? Why didn’t Samantha even tell her parents? Don’t worry; we will be diagnosing all the details.

The fact is that both couples wanted to keep their marriage ceremonies quiet and far from the limelight. Rather than having a grand reception at a wedding, the two lovely couple decided to drive in the car and got married in a civil ceremony and that too without telling their parents. Naughty, hmm?

From the Pioneer Press, Samantha says:

I never was really a girl who planned out what my wedding would be, what my dress would look like. Everybody’s different. When we got married, he picked me up at the airport and I was wearing jeans and a sweatshirt and a hat. We drove the 20 minutes to Hudson or whatever it was, walked in, got married. Then we went and ate Arby’s as our wedding meal. We get way more attention than we ever deserve or need or want, because of our jobs. I don’t need a day that’s all about me. I was happy to go get married. That night after we had our Arby’s, we forgot the offensive line had an Ugly Sweater Party at a local restaurant. One of the guys texted Christian and asked, “Dude, where are you at?” We went to the mall and found ugly sweaters and went to the Ugly Sweater Party. We wanted to leave early, but everybody was like, “No, don’t leave.” I’m thinking, “Gosh, we just got married.”

It all began in 2012 when Christian started sending Samantha twitter messages.

Here’s how Samantha described the courtship:

He started sending me messages on Twitter. I’m like, “Why is this old Florida State quarterback messaging me? This is weird.” He was always asking me random questions about living in Austin. Nothing creepy, but that was our original connection. Our version of Christian Mingle was on Twitter. 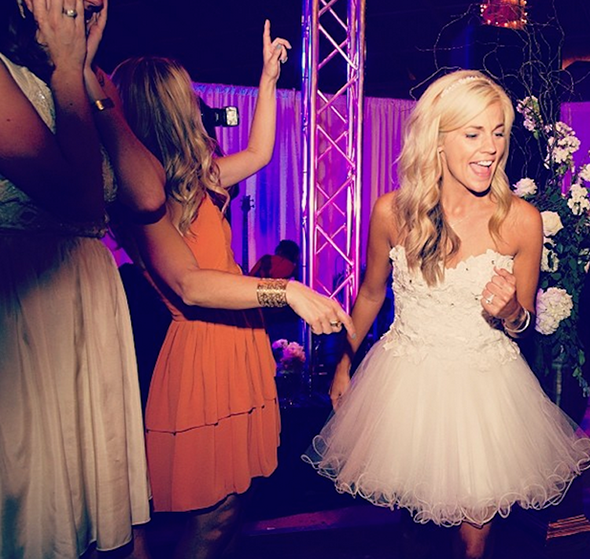 Samantha and Christian started dating in 2012 and by December of that year, Christian purposed her. It was just matter of question. And the answer: Yes, of course. In Samantha Own words:

“He picked me up from the airport. I was coming in for just a few hours. He took me back to his house. This was the first week in December. I noticed there were some lights outside. I was like: “Oh, cool. You put Christmas lights outside.” He was like, “You should go look at it.” It was December in Minnesota, and I’m from Phoenix. I’m like: “Dude, I’m not going outside. I don’t want to look at your lights. It’s freezing.” He said, “You should go look.” I said, “No, I’m good.” He’s like, “Seriously, you should go look.” I was arguing with him. I’m like: “No. Don’t tell me what to do. I’ll look at the lights in the morning.” I was being the brat that I am. Then it clicked in my head. So I walked outside, and I look over to the balcony area and he put “Marry Me” in Christmas lights into the ground. He didn’t put a question mark. It was more of a command, like “Marry Me!” I don’t know if I had an option. I turned around, and he was on his knee and asked me. I don’t even remember what he said. It was all kind of a blur. We decided to get married two weeks later.”

And then they had a baby child. Happy family, isn't it?

Samantha gave birth to a beautiful daughter named Bowden Saint Claire Ponder on July 22, 2014. She was named after legendary Florida State Coach Bobby Bowden, who Coach Christian in Tallahassee, and given the middle name same as Samantha’s. What a tribute? Boyfriend turned husband Christian and Samantha along with their little angel are leading a happy life.

Christian Ponder is an American Football Quarterback, who plays offensive football. His career started in 2007 at Florida State University. Ponder started as a quarterback.He played till 2010 and started his professional career as he was picked by Minnesota Vikings in NFL draft in 2011. He played till 2014 in Vikings, and then he joined Oakland Raiders in 2015. He also played briefly for Denver Broncos in 2015 and is free agent currently.

Hits back at critics!

But in between work and seeing their 2-year-old daughter, Bowden “Scout” Sainte-Claire as she is named after Christian’s football coach Bobby Bowden, the 31-year-old star reporter took some time to knock Twitter trolls on her as some of them had been throwing hateful comments her way. She wrote on Twitter:

“Getting sexist/vulgar tweets abt my job/appearance while I’m unable to see my own feet & covered in toddler pee is somethin else I tell ya,”

Being a working mom in ESPN has put Samantha Ponder in a place where she’s often the target of critics even from other mothers. Ponder said to Sports Illustrated in December of 2016:

“I have had people walk up to me and say things to my face about my parenting and mothering. One time I had a lady ask me if this was her [Scout’s] first flight and I made a joke out of it as I usually do, saying she’s a long pro at this. The woman said, ‘You know, that is terrible for a baby. The immune systems are not ready for this.’

“One of the things I have learned is some of the most judgmental people have been other moms, and there have also been a ton of moms who have been very supportive and encouraging,” she added. “I think a lot of people see how they did it and it worked for them, and they assume that is what works for everyone. I told my doctor I was feeling guilty about having her out so much and he said, ‘There are two things that you have to do. You have to love her and you have to feed her.’ I was like, ‘Okay, I can do those things.’ ”

Samantha Ponder replaced Erin Andrews as the face of ESPN’s College GameDay back in 2012. She has also been the regular sideline reporter for the ESPN’s Thursday Night College Football and is also rumored to replace ESPN anchor Chris Berman on the Sunday NFL Countdown.

Samantha Sainte-Claire Ponder is an American sportscaster and a reporter as well as host for ESPN college football and basketball sideline reporter. Ponder is co-host of ESPN and host of BattleBots, an American Competition series in 2016 season.