By LRU Writer | On: August 26, 2019
Marshawn Lynch is a true ambassador of the sport of the NFL famous from the nickname...fans are more eager to know whats going on in his personal...rumors of Charmaine being the girlfriend of Marshawn turned out to be just... aimed high from the beginning of his playing days at...suffered a groin injury which made him feature in the sidelines for... 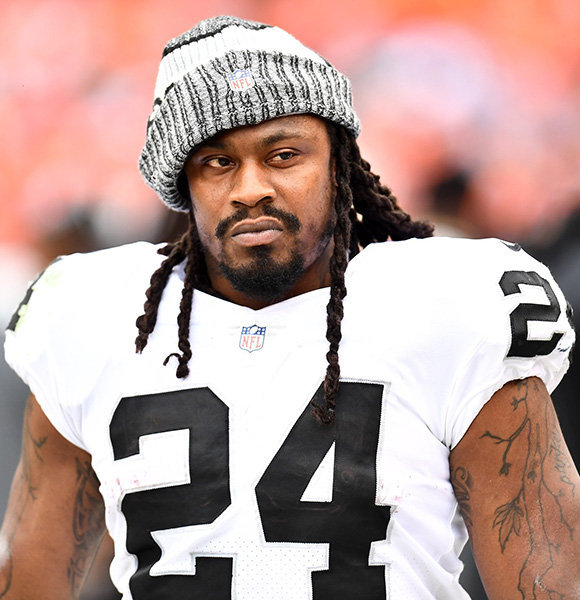 Famous from his nickname "Beast Mode," Marshawn Lynch is a true ambassador of the NFL.

His near to impossible 67-yard touchdown against the New Orleans Saints in the playoffs of 2011 marked his arrival in NFL as the toughest running back in the league.

Anyone who has seen Marshawn "The Beast" Lynch play in the NFL knows what the guy is capable of. However, his fans are more eager to know whats going on in his personal life.

At the start of the 2014 season, the former Seahawks star was strangled between the rumors of dating model, Charmaine Glock. The hot tattoo model was the talk of the town at that moment, and it would be evident if a player like him fell for the model.

But, as the dust cleared out, rumors of Charmaine as the girlfriend of Marshawn turned out to be just a fluke. In an interview, when the model was asked about her relationship with the running back, she replied saying the two were just friends.

Furthermore, the beast mode player’s mother added on the matter, claiming if he had a girlfriend or decided to marry a wife, she would know it.

Raised by parents Delisa Lynch and Maurice Lynch, Marshawn - aged 33 - was the youngest in the family with three elder siblings. Marshawn Lynch before and after high school (Photo: sportsgossip.com)

During his troubled times, Marshawn's brother David Lynch guided him to do the right things. While his sibling Devonte Lynch drew inspiration from him to pursue a career in NFL.

Standing tall at a towering height of 5 feet 11 inches (1.80m) and with a bulky weight of 97kgs, young Marshawn aimed high from the beginning of his playing days at UC Berkeley high school.

Backing a strong performance in high school the 33-year-old was drafted by the Buffalo Bills in 2007, and the rest is history.

Marshawn Lynch was under a two-year contract with Oakland Raiders since 2017. According to the terms of the contract, the running back earned a total of $9 million at the end of the contract.

Then, in 2018, he suffered a groin injury which made him feature in the sidelines for most of the season. Following his unavailability due to injury, the beast of a player restructured his contract which reduced his base value by $500k but guaranteed him $4.5 million in salary.

Now that he has permanently decided to call off time to the sport, Marshawn is making full use of his NFL nickname to start his clothing line and a Youtube channel called Beast Mode.

With more than 38K subscribers on his channel, the beast has accumulated a healthy net worth of $30 million even after his retirement from the sport.