By LRU Writer | On: August 25, 2019
Richard Sherman is a bonafide American footballer. He started his NFL journey...Richard married his long-time girlfriend, Ashley Moss in 2018. He started dating the cosmetologist in...However, the family of four saw a hard time as Richard ruptured his Achilles in the 2017 season... 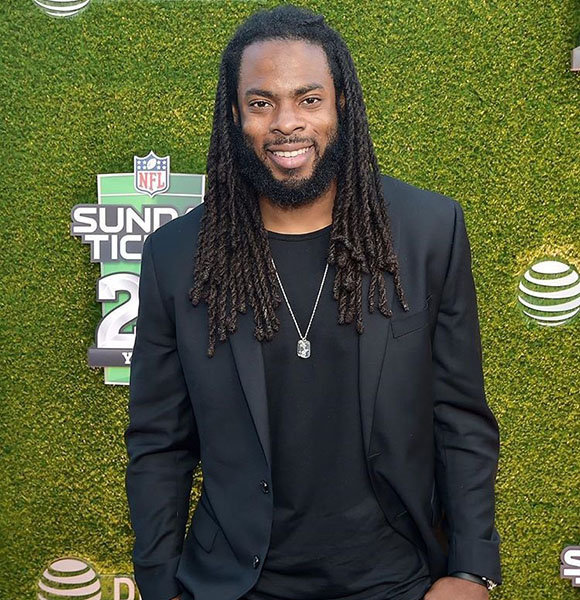 Richard Sherman is a bonafide American footballer. He started his NFL journey with the Seattle Seahawks in 2011. Steadily, he rose to the NFL ranks and managed to win Super Bowl XLVIII with the team.

After a glorious run with his first pro-team, Richard signed with the San Francisco 49ers in 2018. Today, he continues to play as a cornerback with the same group.

Besides being an active athlete, he is a member of NFLPA's executive board.

Who Is Richard’s Wife? Family Info

Richard married his long-time girlfriend, Ashley Moss in 2018. He started dating the cosmetologist in 2013. The couple’s relationship became strong when they welcomed their son, Rayden Sherman, on 5 February 2015. After becoming parents to Rayden, the happy couple got engaged in June 2016.

Richard and his fiancee’ became parents again to a daughter named Avery Sherman, who was born on 16 April 2016. However, the family of four saw hard times as Richard ruptured his Achilles in the 2017 football season. To heal, he had to undergo two surgeries. As if the hardship was not enough, he was let go of Seattle Seahawks in 2018.

After healing from the surgery, the NFL pro bounced back and negotiated his deal with San Francisco 49ers. Interestingly, he has no agent as he likes to settle on his own.

Post solving the adversities of his life, Richard got married to his support system and baby mama on 29 March 2018. The wedding ceremony was a dream as the couple became husband and wife at the Hard Rock Hotel & Casino Punta Canta, Dominican Republic.

The cornerback's wife supports her husband in Blanket Coverage - the Richard Sherman Family Foundation. She is the executive director of the company which helps students of low-income families.

The couple continues to remain an ideal couple as they share a beautiful life and also give back to the community.

Richard is one of the few athletes who excelled both in sports and education. He was a salutatorian of his class in high school with a 4.2 GPA. With his on and off-field skills, the NFL pro went to Stanford University.

The 49ers star graduated with a degree in Communication from the Ivy League college in 2010. After working on his skills, Richard entered the pro-football league in 2011 with Seattle Seahawks. He started his jouney with a four-year contract worth $2.22 million. The lucrative deal also included a signing bonus of $182,424.

You May Like:- Deshaun Watson Stats, Contract, Net Worth, Girlfriend

The athlete of height 6 feet 3 inches (1.90 m) and weight 88 kgs managed to win Super Bowl XLVIII in 2014. Post the success; he signed a four-year contract extension with the team worth $56 million.

However, he was let go of the team in 2018. Shortly, he signed a contract worth $39 million with San Francisco 49ers, the same year.

Today, he boasts a net worth of $25 million along with a salary of $15 million per year.