By LRU Writer | On: May 29, 2019
Melanie Collins is an American Sports broadcaster...She was born in 6th of Feb 1986...started her career working in broadcasting with AccuWeather...had her own show on WPSU-TV with Steve Jones...doesn't come as a surprise to anyone that she found the love of her life... 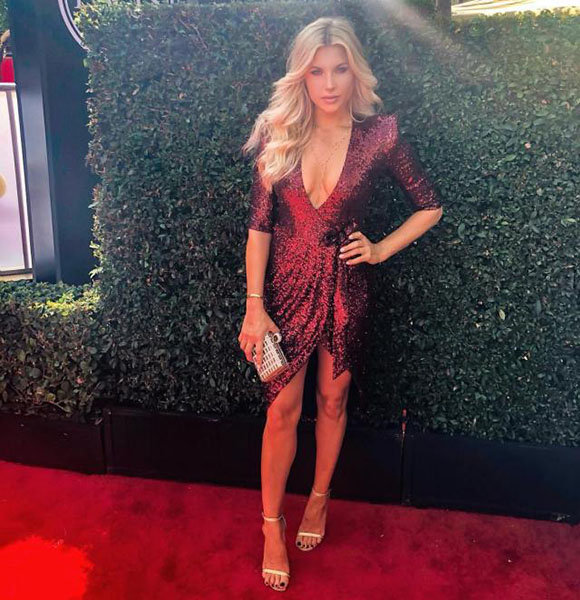 Melanie Collins is an American sports broadcaster and host of the multiple shows belonging to CBS and FOX.

Born and raised in State College, Pennsylvania, Melanie Collins is an American by nationality. An Aquarius, the 33-year-old celebrates her birthday on 6th of February. She was born in 1986 with white ethnicity.

You May Also Like:- Who Is Dante Pettis, NFL Star's Girlfriend?

As for her family, she has two brothers; Kurt & Christian aside her parents. By her admission, her father is a surgeon. Melanie with her brothers, Kurt and Christian at Downtown Birmingham on 17th of January 2015 (Photo: Melanie Collins’ Instagram)

Regarding her measurements, the beautiful blonde has a height of 5 feet 6 inch (1.67 m) and a well-maintained body with a weight of 50Kg. Melanie is a dog lover and has two pit bulls, Nixon and Snoop.

Is Melanie Married? Boyfriend Or Husband?

With most of her time spent on sports, it doesn't come as a surprise to anyone that she found the love of her life somewhere close. Melanie fell in love with a Canadian hockey player, James Neal. Even after their relationship has come out to the public, they remain secretive about their affair. Both Melanie and James have kept their relationship as far away from the radar as possible. They have not revealed any details of where and how they met.

It is clear that they are dating each-other but have they married? Has Melanie made James her husband? Fans will have to wait for either of them to come out with the information!

Melanie is one of those few people who know what they are doing and grab success.

She had an early start in her career. She was already working in broadcasting AccuWeather while she was at Pennsylvania State University.

However, she chose sports in WPSU-TV. With the passion and drive she had, she successfully managed to bag her show with Steve Jones called “Let’s Talk Sports Nittany Lions Fans.”

Melanie has come a long a since then and has established herself as a TV personality. She hosts an NFL sideline reporter for CBS Sports. She also hosts another show on Golf Channel, The Big Break and Driver vs. Driver while also serving as a fill-in host for SportsNation on ESPN.

The talented blonde, with all her hard work, deserves every bit of fame she has accumulated. Also, she justifies more than the average salary of a journalist, i.e., $39K.