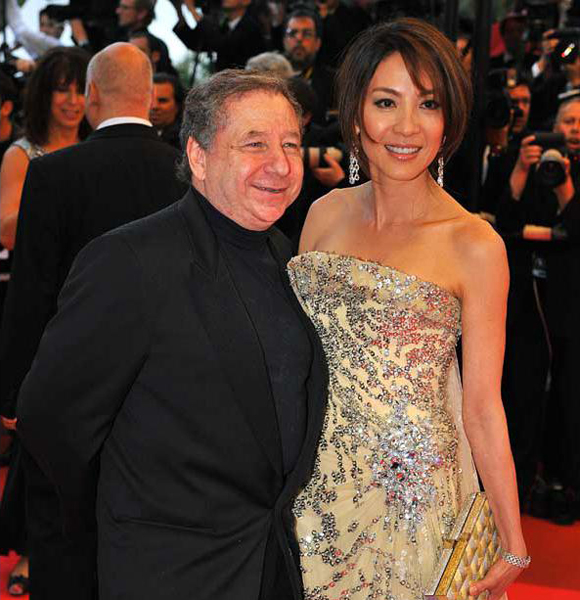 Life is unpredictable; one might taste failure in a relationship, but that does not mean you will not have a successful relationship later in life.

Actress Michelle Yeoh shares a similar scenario, as she too faced failure in love before finding her now partner. Michelle and her soon-to-be husband have been engaged for a long time, and it seems like the wedding will take place soon.

Let's take a deeper look at her personal life.

Michelle Yeoh has been with her fiancé, Jean Todt, the former President of the Fédération Internationale de l’Automobile (FIA). She met her perfect partner, Jean, in Shangai in 2004, and have been together since then.

After being together for a year, Michelle's husband-to-be proposed to her, and they have been engaged since 2005. Michelle calls her future husband her significant other. Michelle and her husband-to-be in Cannes Film Festival 2008. (Photo: Zimbio)

The incident raised many questions regarding Michelle's marital status. However, she clarified the situation and commented on her rumored marriage to Todt, mentioning that she is yet to tie the knot.

She assured people that she would announce her marriage publically when it happened. She said,

"Although we are not officially married, we have been together for so many years. He and I are regarded as each other's respective significant other in our families,"

During a television show in China, the host asked Michelle about her wedding date, to which she smilingly replied, "I am quite free in March."

After her statement, reports circulated that Michelle could exchange wedding vows with her long-time fiancé, Todt, in March 2016. However, that did not happen.

Recommended: Actor Jesse Metcalfe Shares First Engagement Kiss With His Fiancee Cara Santana! When Do They Plan to Getting Married?

Michelle's wedding date has been a matter of interest for her fans, but sadly, the couple is yet to reveal the date of their marriage, possibly due to their busy professional obligations.

The curiosity about Michelle's wedding is still at its peak, as she is asked everywhere regarding the matter.

When Michelle made an appearance in Hong Kong for Crouching Tiger, Hidden Dragon in March 2017, she was kept forth a question about her wedding date, to which Michelle replied,

“[Todt] is very busy himself. We haven’t seen each other in four weeks.”

After hearing her answer, she was asked if there was no time to prepare for the wedding, to which she answered,

“No time! This year will be very busy. I will probably be doing two to three more movies this year. [The wedding] probably won’t happen this year.”

Moreover, when asked about the chances of the wedding being next year, she said,

Uncertainty hovers around their wedding to this date, but we hope they take time from their busy schedule to escalate their already beautiful relationship.

Though Michelle and her husband-to-be Jean have been together for almost two decades, they have no children. However, Michelle hopes to have her kids someday. But she is a stepmom of Jean's son Nicolas from his previous affair.

Before Jean, Michelle married Dickson Poon, a wealthy D&B Films executive. They got married in February 1988 and got divorced in 1992. However, Michelle is close to Poon and his second wife.

Although Michelle does not have children of her own, she is a Godmother of her former husband, Poon's daughter.

However, she did once share that she "loved the idea of having kids."

But, besides her maternal roles on the big screens, the actress has not had the chance to bring the "idea of having kids" into reality.

As of now, Michelle has been focusing more on her growing career than getting married.

Michelle Yeoh was born in Ipoh in West Malaysia as Yeoh Chu-Kheng on August 6, 1962, to her parents, Janet Yeoh and Yeoh Kian Teik.

She belongs to an ethnic Chinese Family of mixed Cantonese & Hokkien descent.

Michelle, also known as the queen of martial arts, had her first passion for dance. She started the formal training for ballet at the young age of 4.

Then, at the age of fifteen, she moved to England to study at London's Royal Academy of Dance.

Explore: Constance Wu Talks About Her Baby For The First Time!! A Look Inside Her Relationships

However, Michelle suffered a spinal cord injury which shattered her dream of becoming a prima ballerina. Despite the setback, she finished her bachelor's degree, focusing on choreography and drama.

Yeoh later participated in the Miss Malaysia pageant and won the title. She also won the title of Miss Moomba in the 1980s in Melbourne, Australia.

Michelle faced the camera for the first time for a commercial in 1984 with star Jackie Chan. Michelle, who stands at the height of 5 ft 3 inches, is best known for her performances in 'Crouching Tiger, Hidden Dragon' and her cameo in 'Tomorrow Never Dies.'

She was nominated for the BAFTA awards in the Best Actress category in 2000 for her performance in 'Crouching Tiger, Hidden Dragon.'

She has also made appearances in 'Kung Fu Panda 2,' 'The Children of Huang Shi,' 'Reign of Assassins,' 'Crazy Rich Asian,' and many other movies.

You May Like: Who Is Liv Lo? Henry Golding Wife's Complete Wiki & Exclusive Facts

According to Celebrity Net Worth, she has accumulated a net worth of $40 million during her career.

Michelle has been living a comfortable life with her fiance in their luxury Geneva mansion. We hope to hear wedding bells from this adorable couple.

Stay with us for more updates on Michelle Yeoh!