Nikki Mudarris - From One Boyfriend To Other! Sparks New Dating Affair Rumors

By LRU Writer | On: February 07, 2020
Nikki Mudarris - From One Boyfriend To Other! Sparks New Dating Affair Rumors. The American TV star and fashionista, Nikki Mudarris aka Miss Nikki Baby, is famously known for her role in the VH1’s reality TV series 'Love & Hip Hop: Hollywood' in the entertainment world. But prior to the appearances in the series, Nikki repeatedly became the talk of the town for her wavering allegations of love affairs. 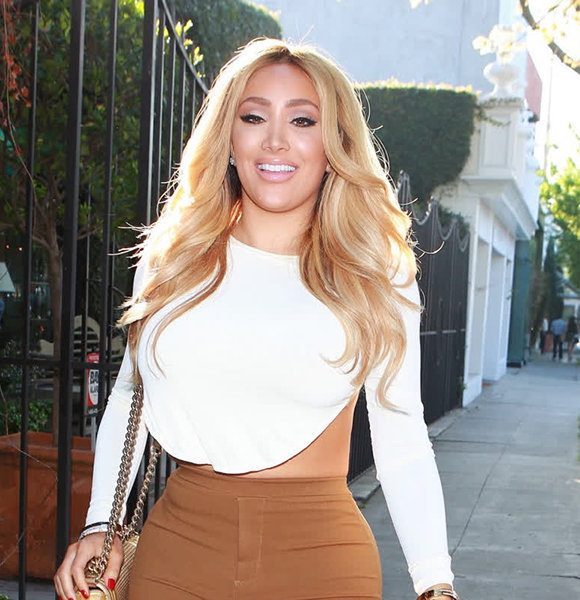 The American TV star and fashionista, Nikki Mudarris aka Miss Nikki Baby, is famously known for her role in the VH1’s reality TV series 'Love & Hip Hop: Hollywood' in the entertainment world. But prior to the appearances in the series, Nikki repeatedly became the talk of the town for her wavering allegations of love affairs.

Even recently, Miss Nikki is rumored to have a new affair. So, if you people want to get acquainted with the information of her recent relationship status along with her previous romantic affairs in a single scoop, follow us in the preface below!

Nikki Mudarris who mostly becomes the buzz in the entertainment world due to her A-listing dating resume was first famously dating the music producer Jamal Rashid, who is well known as Mally Mall in 2012. The duos always were in the limelight due to their on and off relationship status.

However, in 2015 things became messy when Nikki vandalized Mally's house and destroyed the china worth $30k for avenging the breaking of her iPhone 6 by Mally. Though Nikki didn't get, filed for any charges, she was escorted out of place by the cops.

Their dispute turned even messier in September 2015 when a tape featuring Mally and Nikki's intimate moments got leaked on the internet via Mally's iCloud account. Though Mally confronted his accounts had been hacked, Nikki blasted Mally for allegedly recording her, having sex with him without her permission. She then subsequently filed a restraining order against him. Mally Mall and Nikki Mudarris in Miami, Florida back on 18 January 2015 (Photo: gettyimages)

Moreover, just after days of the significant blow with Mally, Nikki was rumored to have rebounded with the NBA player Austin Daye, whom she dated before Mally. The pair was seen together at the Mastro's fancy Beverly Hills steakhouse. Nikki Mudarris and Austin Daye as seen on the Mastro by the TMZ (Photo: TMZ)

After the confusing dating updates, Nikki even kept her fans more in a dilemma by confirming her intimacy with Joseline Hernandez. Nikki previously appeared as a guest in the 'Love & Hip Hop Atlanta After Party' show on June 2016, and there she joked on stealing Joseline from her boyfriend, Stevie. Nikki spoke about her relationship with Joseline in the VH1 exclusive, saying that she has been intimate with Joseline a lot of time, she uttered,

Me and Jose you know, I love her. She loves me too." Well, Nikki's relationship with Joseline hinted her to being bisexual. However, their bonding news got blanketed when Nikki got romantically linked with the producer of the VH1's 'Love And Hip Hop Hollywood,' Safaree Samuels in 2016. The pairs went public with their relationship just before the show returned for its third season.

Talking in the interview with the VH1, Safaree said that his feelings for Nikki were true, as, Nikki Mudarris with Safaree Samuels in a date at Katsuya Restaurant (Photo: zimbio.com)

But at the same time, the lip-lock Nikki had with Rosa Acosta made quite a hum in the media. She was double-ditching both the stars at the time.

The news relating their affair again dimmed away when Nikki Baby got rumored to be dating the producer, Stephen Belafonte, who is also the ex-husband of the former pop star Mel B.

Nikki on her skintight white lace-up trousers and a plunging bodysuit had attended the late-night dinner date in Los Angeles with Stephen in the 2017's Christmas Day.

Conversely, on 30th December the source for the TMZ said that the rumor got falsified. Nikki had attended the dinner on Mastro's to discuss a new shoe-line business with Stephen. Despite a series of dating affairs and rumors, Nikki is probably single, as she has not vocally spoken about any serious relationship. It seems like the lady is assumably waiting for the right partner in her life.

Moreover, Nikki, who is alleged to have relationships with different boyfriends every time, had once been through a devastating past. Back in 2015, she had to lose one of her siblings, her brother, Anthony Omar Mudarris. Commemorating her brother, she posted a picture on her Instagram account with a heartfelt message.