By LRU Writer | On: July 17, 2019
Pete Wentz was in a shortlived marriage with his ex-wife.....the performer's sexuality was gay....girlfriend gave birth to son.....In terms of ethnicity, he is half German, half...net worth amounts to... 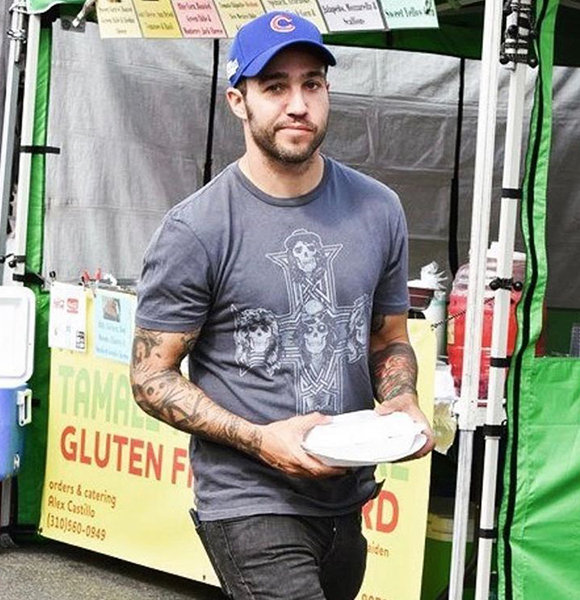 Pete Wentz is an American musician mostly known as a member of the Chicago based rock band, Fall Out Boy. He’s been an essential part of the group as the bassist and primary lyricist.

Interestingly, with eyes decorated with eyeliner, he disrupted the gender roles in rock and roll by giving performances that appealed to gay fans as well. Also, there were rumors in 2009 that Pete was secretly gay. But, he put a stop to the claims citing his sexuality as straight and even wished to become a gay man.

His sexual preference is irrelevant as the musician puts humanity above all. He has done several humanitarian works for fundraising projects such as Invisible Children, Inc., and UNICEF's Tap Project.

Pete's date of birth as per the official records is 5 June 1979. He grew up in Wilmette, a village in Illinois under the birth name Peter Lewis Kingston Wentz III. The singer almost graduated in political science but eventually dropped out of college to focus on his band.

His father Pete Wentz II works as an attorney, and his mother Dale Lewis is a high school admissions counselor.

Surprisingly, even though the musician grew up to pursue a career in the creative field, he comes from a very political background.

His grandfather Arthur Winston was appointed as the US Ambassador for Sierra Leone; whereas, his parents have a good connection with former US Vice President, Joe Biden. Moreover, the songwriter's parents had first met each other during Joe Biden’s campaign trail, and the ex-VP even attended their wedding.

In terms of ethnicity, he possesses a mix of German, English, and African heritage as his maternal grandparents are from Jamaica. Meanwhile, he stands not that tall at the height of 5 feet and 6 inches (1.68 meters).

The artist was in a shortlived marriage with his ex-wife Ashlee Simpson, pop singer and younger sister of Jessica Simpson. The pair tied the knot on 17th May 2008. The same year their baby boy Bronx Wentz was born.

Sadly, in 2011, the pair got divorced officially but continued co-parenting their son under reasonable terms.

After the divorce in 2011, Pete started dating model Meagan Camper the same year, and their relationship led to the birth of two children. His girlfriend gave birth to son Saint Laszlo in August 2014. Coincidentally, their daughter Marvel Jane Wentz was born on Mother’s Day in May 2018. Although the pair had expressed their will to get married back in 2014, Pete and Meagan could be having second thoughts about being bound legally.

At the age of 40, the musician has already succumbed a net worth of $16 million due to his focus on investing money in profitable businesses. He is the founder of Clandestine Industries and owns a film production company called Bartskull Films.

Artist With Net Worth of $ 16 Million :- Father of 2 Children, Tony Sirico's Interview in Friend's Funeral

He is also the co-owner of a New York City Night Club and maintains a lavish lifestyle in his $5.5 million worth mansion in The Summit, California.