By LRU Writer | On: August 22, 2018
Princess Eugenie, a member of the British Royal family, has chosen a Non-Royal man as her soon-to-be bridegroom...Princess Eugenie first met her husband-to-be at... Princess Eugenie got engaged to her fiance in... after she met him at...The wedding is set to be held on... For the wedding, she has undergone a weight loss journey... 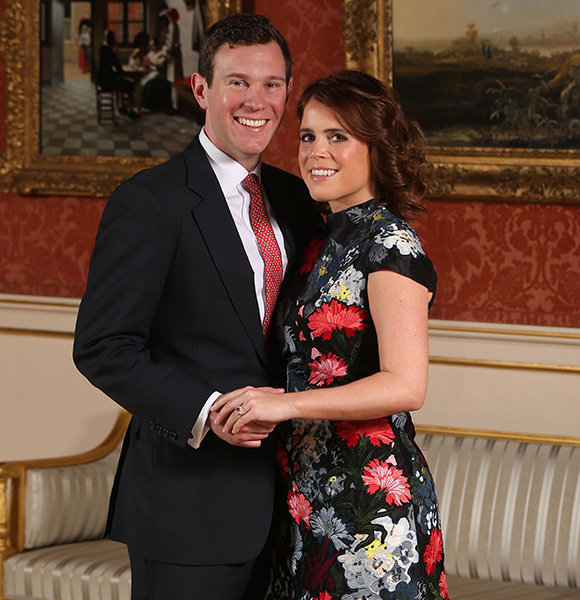 Princess Eugenie, a member of the British Royal family, has chosen a Non-Royal man as her soon-to-be bridegroom, which is nothing less than a real-life fairytale. The pair, who got engaged earlier in January, has a grand wedding to be held after a few months.

Well, on one hand, Eugenie has her upcoming wedding's excitement to contain while she has turned more health conscious, following a strict workout and diet plans to achieve some weight loss before the marriage takes place.

First Meeting To Getting Engaged; Wedding Plans Made

Princess Eugenie started her romantic chapter after she first met her husband-to-be Jack Brooksbank in February 2010 at the 50th birthday celebrations of the Duke of York, Prince Andrew, which was held in Verbier, Switzerland. The Princess, who was 20 then, developed an instant liking for Jack.

Jack, who previously worked at the Admiral Codrington pub in Chelsea and the Markham Inn, also met Prince Harry and Guy Pelly at the event; and was hired to manage the nightclub Mahiki located in Mayfair. Jack left the job in the same year and later started his wine merchandise. Further, he is also the brand ambassador of Casamigos Tequila, a brand which is co-founded by Hollywood actor George Clooney.

The pair attended their first Royal event in 2011 at the annual horse race. In 2013, when the Princess moved to New York, the couple maintained a long distance relationship but remained intact and regularly communicated on Skype. Jack told in a 2013 interview with the Daily Mail,

"We spend a lot of time on Skype. It’s great. We are still very much together."

Eugenie moved back to London in 2015 and continued her romance with her boyfriend. The couple maintained a low-key dating life and mostly spent their time indoors watching television shows like Game of Thrones and Walking Dead. In an interview, the Princess of York even mentioned that it was a coincidence as her boyfriend and dog shared the same name.

In September 2016, rumors spread that the couple had got engaged after they spent a weekend at the Balmoral along with the Queen and other Royal family members. Although the engagement rumors turned out to be false, an insider claimed that Jack was accepted and welcomed by the Royal family.

Although sources mentioned that the pair was taking things slow, the public was surprised when the Royal family announced the news of their engagement on 22 January 2018. In a post shared by the Royal family on their Twitter account, a statement notifying about the couple's engagement was attached.

Soon after the announcement, a photoshoot of the newly engaged fiances was held. In one of the photographs, Eugene could be seen flaunting her massive engagement ring. Soon after the photo shoot, the couple appeared in an interview where Eugenie talked about the surprise engagement which took place during their vacation in Nicaragua. The Princess spoke in the interview,

"The lake was so beautiful. The light was just a special light I had never seen. I actually said this is an incredible moment, and then he popped the question, which was really surprising even though we have been together seven years. I was over the moon."

Eugenie, who is the daughter of the now-divorced couple: Duke and Duchess of York, Prince Andrew, and Sarah Ferguson; is a distance cousin of her fiance. The pair is set to get married in a wedding which will be held in St George's Chapel in Windsor, the same venue for Prince Harry and Meghan Markle's wedding.

The wedding date is planned to be held on 12 October 2018, as notified by the Royal family.

With a net worth of nearly $4.8 million, Eugenie will tie the knot with Jack in the Windsor Castle in front of 1200 guests. Although specific plans for the wedding have not been disclosed, the 28-year-old Princess has officially announced Princess Beatrice as the bridesmaid.

Further, Prince William and Kate Middleton's two kids will accompany Eugenie while she walks down the aisle. However, the Royal Family has not revealed whether the wedding will be broadcasted on live television.

The upcoming event is set to cost a fortune for the Royal Family as its estimated expenses will reach $3.5 million with the cost of maintaining security alone valued at around $2.5 million.

The security charges for the October ceremony was earlier supposed to be costing about $1.3 million but now has nearly doubled due to ongoing terrorist threats. However, the Royal Family will not be worried about the increased charges as the payments for the upcoming wedding will be paid from the money of the taxpayers of UK.

In the meantime, it has been assumed that the soon-to-be husband and wife may not sign a prenup before they get themselves tied to the matrimonial relationship. Famous author, Katie Nicholl mentioned that prenups are not a regular custom in the Royal Family and neither Prince Harry nor William signed the contract before getting married.

Katie further added that prenup is not necessary as most of the family's properties and money were in the name of the Queen.

After the announcement of Eugenie and Jack's engagement, the Princess has been following a more healthy diet and performing physical exercises which are helping her in the weight loss she hopes to achieve before her wedding.

Read Also:- Darrell Sheets Gets Love & Weight Loss, All After Divorce With Wife Of Longtime

She talked to the Harper's Bazaar about her daily workout routine and her weight loss journey. She told in the interview,

"I get up around 6:45 to start exercising by 7. I go to the park from 7 to 8. I do circuits, which I love because they're quick: burpees, squat jumps, lunges, the whole lot. It's much better, as I can't run for a long time. Or I go with my best friend to this amazing, women-only gym called Grace Belgravia."

Further, she has also replaced alcoholic beverage with Vodka and soda water, with is much lower in calories than other alcoholic drinks. In her recent photos, Eugenie can be seen slimmer than she was back in early 2018. Princess Eugenie looks slimmer (right) than she was at the beginning of 2018 (Photo: GettyImages)

Personal trainer, Jess Tonking assumed that she may have lost nearly three percent of her body fat by now. If Eugenie continues losing the weight, she might not have to get worried if the wedding dress will fit or not.