By LRU Writer | On: January 26, 2021
American TV star Darrell Sheets is famously known as one of the treasure hunters of the reality series Storage Wars. Darrell keeps his luck at stake and hopes to strike rich every time he bids, but not everytime turns out to be lucky. Sometimes the storage units credit expensive things, and sometimes only trashes. Though his career rarely gets lucky, it has come to the limelight that his personal life is filled with luck as he timely is seen dating blissfully. Despite the failure of first marriage, his life showered him with happiness from girlfriend, children, and grandchildren. 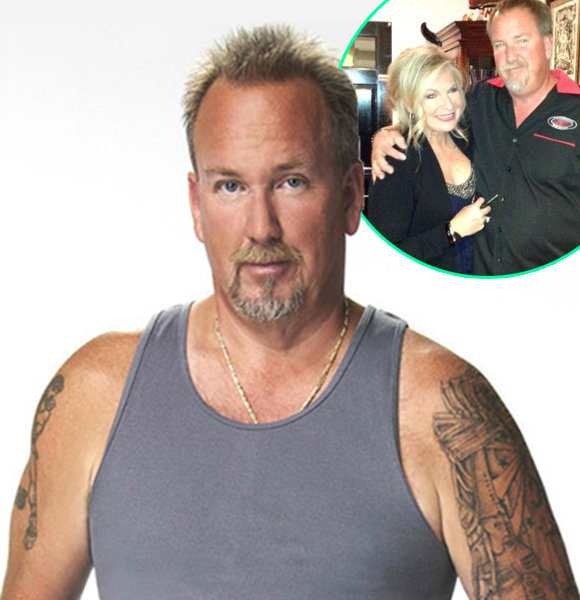 American TV star Darrell Sheets is famously known as one of the treasure hunters of the reality series Storage Wars. He keeps his luck at stake and hopes to strike rich every time he bids, but not every time turns out to be lucky. Sometimes the storage unit credits expensive things, and sometimes only trashes.

Though his career rarely gets lucky, it has come to the limelight that his personal life is filled with luck as he is seen dating blissfully. Despite his first marriage's failure, Darrell's life showered him with happiness from his girlfriend, children, and even grandchildren.

62-year-old Darrell is indeed a bold person who unhesitantly takes risks and speaks out his bid out loud. But when it comes to the affair of his past, Darrell never drops a word.

Darell has two children from his ex-wife, but he has kept his wife's identity under the wraps. One of his children is Brandon Sheets, who even partners up with his father for the show Storage Wars. But the information on the other child is still concealed.

Moreover, it is also not sure when the couple tied the knot and when they divorced. Their whole marriage and family life are kept in the dark. But despite being low key about the previous marriage, Darrell openly flaunts his relationship with his girlfriend.

Darrell, who owns a net worth of $4.5 million, has been in a relationship with Kimber Wuerfel, a successful real estate agent from Orange County, since 2011. The pair first saw each other on the open road, and their eyes met through their car windows while Darrell was driving on the 55 and 91 interchanges in California.

The pair exchanged glances, and Darrell couldn't resist but follow her several miles before giving her his number via a piece of paper. Interestingly, Kimber called, and the pair clicked instantly. Also, Darrell moved to Huntington Beach from San Diago to be close with Kimber. As a result, they were so close that within a year, they got engaged in March 2012.

The fiances even attended various events together. They participated at the A&E Networks Upfront party at Lincoln Center, NYC, on 9 May 2012. Moreover, they also updated their fans on their relationship via social media accounts. On their fourth anniversary, i.e., in March 2015, Kimber uploaded a beautiful scenery on her Instagram, and via the captions revealed that she and Darrell were going for a romantic dinner date.

Darrell also Instagrammed a picture of Kimber and disclosed that their anniversary day was great.

"Had a great anniversary , church with the kids , shopped, lunch , kick back on the yacht , and now capt jacks dinner"

The pair had a good time together, and Kimber helped Darrell not only with his business but also with his weight loss. She motivated him and made his start Nutrisystem, a new fitness regime, which transformed his body from 315lbs to 197 lbs.

However, in 2016, the dark part of their relationship surfaced out, as the couple appeared to have parted ways.

In December 2016, when Darrell returned to the show Storage Wars, he revealed that he was engaged to Romney Snyder, a HiCaliber Horse Rescue worker that saves the horses from slaughter auctions.

You May Also Like:- Unsuccessful Married Life of Kimberly Guilfoyle: Know About Her Ex-Husbands And Reason For Divorce

He didn't mention anything about Kimber neither gave full details of his engagement with Romney. On 21 July 2017, he posted a collage picture with Romney and, via the caption, revealed that he was outing with Romney. But since then, his social media lacks the presence of Romney. Instead, he can be seen again with his long-time love Kimber.

On 13 May 2018, Kimber uploaded a photo with Darrell and, through the caption, asked her fans to help her wish Darrell a Happy Birthday.

Moreover, Darrell too celebrated Kimber's happiness in his Instagram when Kimber's son graduated from Chapman on 21 May 2018. He Instagrammed a picture of Kimber and her son and wrote that he is proud of Kimber, who has a net worth of $400 thousand. He also quoted Kimber as his "babe."

So proud of this women , busting her ass and putting her son through a top notch college great job Babe

Speculating at the social media posts, it seems like Darrell and Kimber have reconciled and rebounded. Hopefully, the pair remains together in the upcoming days. With his reconciled father-son relationship, he also found some worth in the locker. Darrell found a locker that had a value of around $300,000. The cabinet contained the great artwork of Frank Guttierez, which made it the single biggest find on Storage Wars.

The father-son appeared on the TV show Storage Wars, and the audience loved to watch them have fun and play their part correctly in the show. As Darrel found the most valuable items on the show, his son seemed to have more lurked towards his father, and he is more determined to follow in his father's footsteps.

But as of now, he is more interested in finding valuable items so that he could exchange them for cash. So, instead of collecting the items that his past hobbies were more like his passion, he is driven by the monetary worth.

The reality star suffered a mild heart attack on 10 March 2019, which saw him hospitalized for days. Darrell, who had been ill for nearly three months before the cardiac arrest, shared the news of his condition with fans via an Instagram post.

After being rushed to the hospital, he found out that he suffered from congestive heart failure along with problems in the functioning of his lungs. Darrell Sheets alongside his fiancee Romney Snyder at the hospital in March 2019 (Photo: Darrell Sheets' Instagram)

The Storage Wars' star was set for surgery after the mild trauma, but the procedure's success or failure is yet to be revealed. Throughout the process, Darrell's fiancee Romney remained by his side and even provided emotional support to her partner.

It looks like Darrell is still together with his fiancee Romney and has not got back with his former flame, Kimber.

Years ago (around 2014), Sheets was not the same as he is today. He had some extra calories, more than 300 pounds, to be specific. He realized that he had to lose a remarkable amount of weight, so without any delay, he started the process with the necessary requirements.

He initially lost around 35 pounds and then turned to Nutrisystem, a commercial provider of weight management products and services, to further weight loss.

He said his joint and body hurt initially. He was tired of exercises with no results, so he had to look out for a solution, and there was no better choice than Nutrisystem.

Moreover, Sheets was lucky to have his then-wife, who stood by his side to support him. His wife, Kimber, was always there for him as a motivator.

After losing weight of 40 pounds, Sheets completely changed his lifestyle. He has learned portion control and is making better choices. Today, he wants to be an inspiration for others looking to achieve weight loss goals.

It's all about hope. Hope is having 200 bucks to buy a locker and a chance to change your life. It's that same hope that motivated me to lose weight. I knew life would be much sweeter when I achieved my goal. Now, I want to spread that message of hope to others. If I can change one life at a time by helping someone get off the couch, I will be happy

Big cheers to Sheets, who never gave up on the weight loss process, and thanks to his then-wife wife and Nutrisystem for their motivation and effective program.