By LRU Writer | On: November 11, 2019
Rebecca Jarvis is married to...surprised her fans in...Her small bundle of joy...the couple seems more content than ever stepping towards parenthood...Rebecca Jarvis was born on...She is quite an established name in the realm of journalism as she holds the position of...

Who does not wish for success? This is a silly question actually because success is something that everybody craves. Some people desire success in their careers, while some in their love life. But not everyone is lucky enough to acquire success in every aspect of their lives.

However, some well-known personalities like Rebecca Jarvis do manage to pull it off and have it in their career and their love life too.

Rebecca Jarvis is married to Matthew Hanson, who is a stakeholder at GSA Asset Management. The couple got married on 28th January 2012 at McNamara Alumni Center, Minneapolis.

The couple also revealed to The New York Times about their love story and how they started to date. It turns out that they first met when they were students at the University of Chicago. They were not dating while at University. When asked about what she remembered about Matthew, she said,

“I remember him as this guy’s guy, always hanging out with a large group of friends and making them laugh.”

“She was the funniest girl I ever met, There was an enormous depth to her personality and character that she didn’t reveal to a lot of people. I found that very appealing.”

After graduation, the young Rebecca and Matthew found themselves in the investment banking sector in Chicago. After more than a year of working together with Rebecca, he finally asked her out on a date. When asked why she accepted Matthew’s date proposal, she answered,

“By working so closely together for a year, I got to know him very well,” Ms. Jarvis said. “I had already seen how well he treated other girls he dated before me, and I knew how genuine he was. Investment banking is a brutal business, but he always had the ability to do the comic-relief thing to help relieve the stress, not just for me but for other members of our group. So by the time he asked me out, I was able to see who he really was without him having to make a first impression.”

It was not until 2010 when Matthew asked the ultimate question to Rebecca while kneeling on his one knee.

“I did not see it coming,” Rebecca continued, “It was so cold out, and we were both shivering. When he took off his glove and reached into his pocket to take out the ring, it was difficult to tell if he was shivering from the cold or from nervousness.”

However, she kept off from revealing news of her pregnancy to anyone and surprised her fans in 2019 with a piece of promising news. On 20th February that year, she gave birth to her beautiful baby girl Isabel Noemi Jarvis Hanson.

Her small bundle of joy weighed about 3.6 kilograms during her time of birth, and interestingly, the pair had previously expected that their child would weigh less than that. 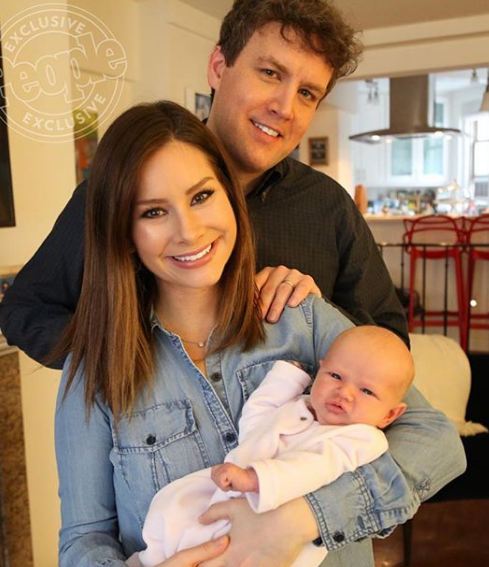 As of now, with a healthy adorable baby in their life, the couple seems more content than ever stepping towards parenthood. Speaking on the experience, Rebecca shared citing,

“This is the most magical moment in our lives, Everything people say about becoming a new parent is true. We’re overjoyed — she’s incredible.”

Since then, her daughter has made an appearance in her Insta handle several times.

And by the looks of her posts, her husband seems to be allocating more time to spend quality time with their daughter. Similarly, working together, they do not need to divorce themselves from their professional life completely to raise their newborn.

Rebecca Jarvis was born on 14 December 1981. She is the daughter of Gail Jarvis and James T. Jarvis. Rebecca is also a social worker, and she has been honored for raising $750,000 for her own non-profit children charity. She has also been awarded a point of light for her support for disfranchised children and teenagers.

She is quite an established name in the realm of journalism as she holds the position of financial journalist and Chief Business & Economics Correspondent at ABC News Channel. Apart from that, she is also known as a finalist on season 4 of The Apprentice.

The Apprentice's Omarosa Manigault's 2017 Wedding:- Was Engaged With Boyfriend Of 4 Years After Then-to-be Husband Died

Before working at the ABC, Rebecca worked at CNBC as a co-anchor of CBS This Morning Saturday. Later on 30 March 2013, she announced that she was leaving CNBC News. Shortly after that, on April 2, she announced she was joining ABC News.

On top of her career, she also has a youtube channel called Real Biz with Rebecca Jarvis, where she talks with many famous personalities, and to be honest, this is a pretty fun show.