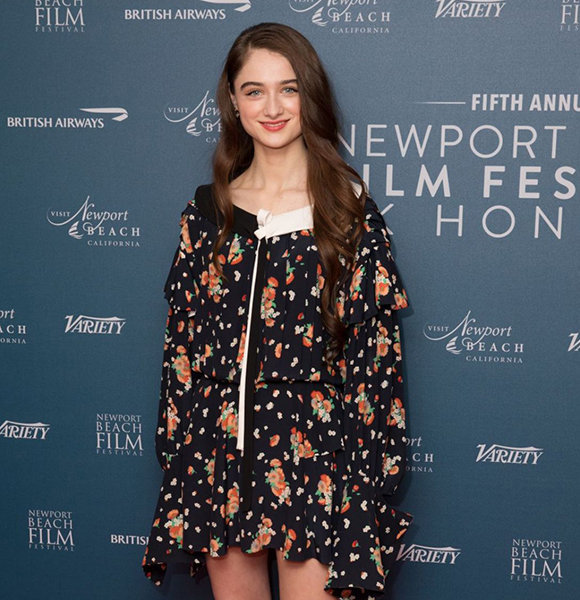 Renowned for her roles in movies like Tomorrowland, Mr. Selfridge, and Snow White and the Huntsman, English actress Raffey Cassidy has proven herself as a genuine artist.

Merely aged, Raffey has built a strong fan base, but her career path may change in the future as she hopes to be a fashion designer post finishing her education.

Born in 2002, Raffey celebrates her birthday on the 30th of August every year. She grew up in a town called Worsley in England, making her a British by nationality. Further, she belongs to the mixed ethnicity of Irish, English, and possibly others.

Raised in the loving arms of the father, Simon Cassidy, Raffey is the youngest of three children. She has two elder siblings, a brother named Finney, and a sister, Grace. Both of her siblings are also actors.

A star at a young age, Raffey is a beautiful teenager. The young actress stands with a height of 5 feet 4 inches (1.65m), but she still has more years to grow. She possesses a weight of 52Kgs.

As for her education, the star attended Moorside High School located in Swinton.

While some people hustle hard and grind to get an audition. Raffey had luck on her side.

She was accompanying her brother Finney to an audition. The casting people announced that they needed a girl to play a small part. Raffey accepted the offer. The role turned out to be for the movie, Spanish Flu: The Forgotten Fallen. Raffey was only seven years old at the time when she played the role of a little girl named Ellen.

The movie started her career in show biz and propelled her into the spotlight of Hollywood. Raffey's rise to fame came when she was cast for the role of Athena in the sci-fi 2015 film, Tomorrowland, alongside stars like George Clooney and Hugh Laurie. She has since then lent her talent in many movies and TV shows. Raffey Cassidy as Athena in the 2015 movie, Tomorrowland (Photo: IMDB.com)

Her skill in the craft had her listed in the Stars of Tomorrow by Screen International in 2013. She is the youngest actor till date to make a list. Undoubtedly, Raffey has a lot of stardom waiting for her in the future. As of now, the young star is making the rounds all over Hollywood.

Her net worth is not mentioned, but she is undoubtedly paid well for her time and earns more than the average salary of $50K.

After seeing her sacrificing herself to save her lover Frank in Tomorrowland, people began to question who the particular person in her life off the screens.

The truth is that Raffey is a young girl and might not be mature enough to be in a serious relationship. She could have a high school crush or a boyfriend, but there has been no substantial evidence of her dating anyone at the moment.