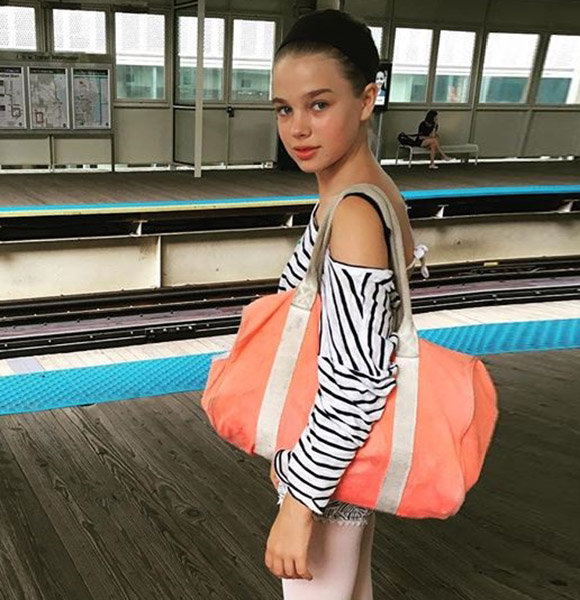 Australian actress Teagan Croft got her to break with the role of Indi Sommerville in the 2016's movie, The Osiris Child.

With her great art-work, her work is well-appreciated by the viewers. She has also earned the record of the first actress to portray the role of DC comics Raven in the television series, Titan.

Australian actress, who celebrates her birthday on 23 April, was born in the year 2004, in Australia to the actress mother Rebecca McNamee Croft and father Tims Croft, is the eldest child, who also has other two younger sisters.

However, the identity of her sister is not known. But she took to Instagram on 2 August 2016 to share the news about her newest addition to her family.

She shared the picture of her mother with her baby bump writing the caption: "My mama has a little baby in her belly!!! Looking forward to the #thirdbornchubby-cheeks!"

Don't Miss:- Peter Gadiot Has A Girlfriend He Hoped For? The Actor Wants A Dating Affair

It seems she is happy to be the eldest among her siblings and with the arrival of the little one, she could not stop herself from sharing the glimpse of her baby sister. She took to Instagram on 13 January 2017, to announce the arrival of her sister writing:

"She is sweeter than sugar. Welcome to the world, baby sister."

Teagan, who stands at the height of 5'4", followed the footstep of her mother and became the young teen actress in the Hollywood. However, she is also close to her father, whose detailed information is hidden. Being the husband of the actress-wife and rising star daughter, he has successfully kept his information inside the box. Not only to father, she also expressed her love and respect for her mother and baby sisters, where she described them as her world. Teagan is usually spending her time with the family aside from her work schedule.

Here, Teagan was spotted with her two little siblings on her mother's social media. Rebecca took to the Instagram on 25 July 2018, with her three beautiful daughters writing:

"Smile for Mumma my babies young and old. She loves you." Moreover, Teagan's mother is proud of her teen daughter who successfully landed the role of Raven in the Titans. She further described Teagan as the strong, independent, and complex daughter who nailed the role.

Since the acting runs through her veins, Teagan's acting career commenced at an early age of nine with the role of "Scout Finch" in a 2014's theatrical adaptation of To Kill a Mockingbird. However, she got the break in her career with the lead role in the 2016's film The Osiris Child.

Don't Miss:- If Ryan Potter Was to Start Dating and Have Girlfriend, What Would it Be Like?

Aside from her acting career, she also has a passion for writing the songs and is an avid book reader. With her astonishing career, she appears to be young to be in the dating status. As of now, she is too concern for her rising career rather than the dating life.