By LRU Writer | On: May 23, 2019
Rashel Diaz is the popular host of Telemundo variety program, Un Nuevo Dia...The talented lady has been with the show since its inception in 2008...Her past hosting gigs include Escándalo TV de noche and ¡Despierta América!. Along with her hosting gigs, Rashel also found time to work for brands such as Baume & Mercier, AT&T, Macy’s and Colgate to name a few. 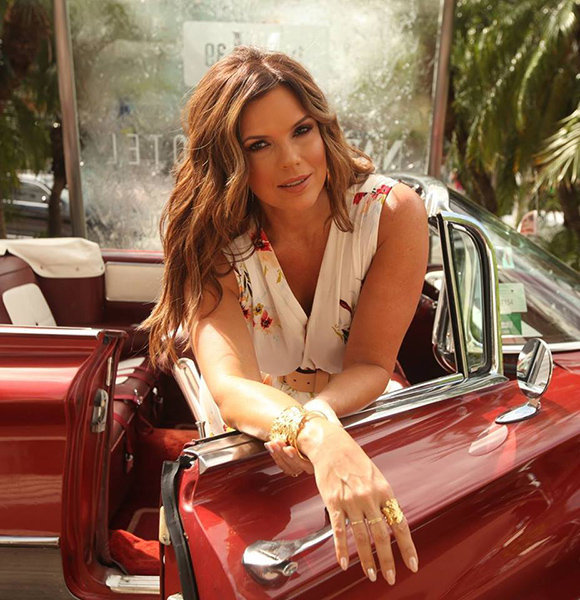 Famous for hosting the Telemundo variety program, Un Nuevo Dia; Rashel Diaz has become a favorite among the show's fans.

The talented lady has been with the show since its inception in 2008. Her past hosting gigs include Escándalo TV de noche and ¡Despierta América!.

Apart from her job as a TV presenter, Rashel has also found time to work for brands such as Baume & Mercier, AT&T, Macy’s and Colgate, to name a few.

Rashel was born on 3rd July 1973 at Havana, Cuba. She is a Cancerian by her birth sign.

The Cuban beauty started her career as a model working for Sabado Gigante for ten years, before eventually hosting TV shows. In the course of her career, she left her native country and moved to Miami, Florida, in 1994. However, she holds the nationality of Cuba via her birthright.

Rashel has made quite a name for herself in the TV business, which helps her earn an average salary of $55,294 per year. The salary adds to her undisclosed net worth.

Who Is Raschel’s Husband? Dating Details

Rashel has been married to Carlos García since 24th November 2016.

The pair got hitched after two years of dating in an intimate wedding ceremony. The Un Nuevo Dia host and her boyfriend defied several societal norms while turning their affair into marriage. Well, Rashel - age 45 - is a total of nine years older than her man. While society expects a man to be older in a relationship, the pair prove everyone wrong and continue to be in a happy marriage.

Furthermore, the TV host’s marriage with Carlos was her third legal affair. She was married twice and almost walked the aisle a third time before falling for the handsome hunk in 2014.

Despite all the adversities, the pair came together and fell in love. Today, they are raising their blended brood together. Rashel has two children; Juan Daniel and Daniela, while Carlos boasts a daughter named Madelyn, respectively from their previous relationships. The pair are incredible parents to their children.

Rashel keeps sharing beautiful photos of her blended family and fans love the positivity and good vibes between them on social media. Along with her husband, the TV host is exceptionally close to her parents and mother-in-law. She dedicates the envy-worthy declaration of love for her family member on her Instagram handle.

People love the beauty of the Latina ethnicity host on TV as well as red carpets. She makes headlines with her fantastic hair looks and long legs while attending the high profile red carpet events.